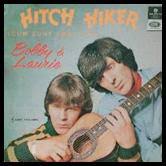 In the mid 1960’s Melbourne was in the grip of a beat music boom, clubs and discos were mushrooming all over the city – Catcher, Biting Eye, Thumpin’ Tum, Sebastians, Berties, Opus, Powerhouse – while  local bands were copying the look and the sound of their British- invasion beat group heroes and feverishly scanning obscure B-sides and album-only tracks that could be re-invented and given the beat treatment.

Few of the early beat group sensations in Australia wrote their own material – Billy Thorpe and the Aztecs, Ray Brown and the Whispers, Normie Rowe and the Playboys, MPD Ltd., simply re-birthed standards and obscure songs in the new Mod rock tradition. Original songwriting was limited to the more innovative individuals and groups such as the Bee Gees, the Easybeats, the Loved Ones, the Masters’ Apprentices and a particularly hyperactive duo from Melbourne known as Bobby and Laurie.

Laurie Allen was a veteran of the Melbourne rock circuit, he had played with the Roulettes and in 1959 became the lead guitarist for Malcolm Arthur and the Knights, several of his bandmates, Graham Trottman and Phil Blackmore, would ultimately join the Playboys, Normie Rowe’s backing group. Following a three- year stint as keyboardist/vocalist with the Blue Jays between 1962-64, Laurie rejoined the Roulettes, his old bandmate Phil Blackmore was now managing the group.

Bobby Bright had emigrated from the UK to Australia in 1953 and lived and performed in Adelaide until he relocated to Melbourne in 1963, he became a guest vocalist with the Roulettes and soon after, the chemistry between Bobby and Laurie convinced them to become a duo.

Laurie Allen wrote their first smash hit in 1965, I Belong with You came straight from the beat music playbook, the song skillfully uses a stomping beat reminiscent of the Dave Clark Five’s Bits and Pieces, and Bernie O’Brien of the Rondells delivered definitive lead guitar riffs. Bright and Allen were also a terrific live act, they quickly became the Beatle boot-stomping, fun-loving, mane-tossing mods of the local scene, backed by the talented Rondells and simultaneously appeared on the GO! Show as well as recording on the GO! Label, where I Belong with You was the first record released by the Horrie Dargie -owned label.

The song was recorded on four track equipment at Bill Armstrong’s South Melbourne studios under the steady hand of Roger Savage, who had emigrated from the UK in 1964 where he had already produced records for the Yardbirds, Petula Clarke, the Hollies and importantly Come On, the debut single for the Rolling Stones, which they had recorded at the Olympia Studios in London.

Savage possessed start-of-the-art knowledge of current UK recording techniques and would become the go-to producer for such emerging local acts as MPD Ltd (Little Boy Sad/Lonely Boy), the Easybeats (She’s So Fine), Axiom (the album Fool’s Gold), The Masters’ Apprentices (Living In A Child’s Dream), Healing Force (Golden Miles) and others including the Twilights, Lynne Randell, The Eighteenth Century Quartet, Spectrum and the Spinning Wheels.

In Craig Horne’s 2018 novel Daddy Who? Bobby Bright provides great insight into the recording of this song “Laurie had originally written the song as a waltz, but I suggested we change it to straight ahead four/four time. We also wanted the record to have a beefed- up bottom end. Australian records at the time were often very tinny, but we wanted the record to sound more British. I don’t know how he did it, but Roger (Savage) lugged a railway sleeper – though it was probably a piece of plywood – into the studio and added a couple of contact mics at each end. I then thumped on the wood giving the record that foot stomping bridge that jumped out of radio speakers across Australia.”

In 1965 Bobby and Laurie supported a national tour by the Dave Clark Five, the Seekers and Tommy Quickly and later that year supported yet another national tour, this time by the flamboyant, pants-splitting, unpredictable Texan PJ Proby.

In June ’65 the duo followed up with Someone, which echoed the beat era cadences and riffs of their debut hit, written and recorded by US singer/songwriter Doris Troy (who wrote under the pseudonym D Payne) in 1963, she also penned Just One Look, a hit for the Hollies (#2 UK ’64).

Someone charted at #20 and was rapidly followed onto the charts by another Allen/Bright original composition in Judy Green, a lively slice of garage rock about an aptly-named jealous female, which charted #28 in September of ’65.

Hitch Hiker was a Roger Miller composition that had not been a hit for him in the US, but the duo saw the opportunity to give it a new lease of life, Bobby and Laurie had left Go! Records and hooked up with Albert Productions at this time, they were also moving away from teen beat pop towards a more country-tinged style of music.

When they went into the EMI Studios in Sydney with a new Rondells line-up which included Wayne Treble (guitar), Wayne Duncan (bass) and Gary Young (drums), the latter two would become foundation members of the legendary Daddy Cool line-up in the not-too distant future, Ted Albert was overseeing the production of the session.

This plaintive cover of Hitch Hiker was better than the original, the lead vocals and spoken word inserts by Bobby Bright were beautifully underscored by Young’s muffled tom toms and distinctive overdubbed castanets. Wayne Treble achieved a distorted guitar sound after acquiring a fuzz tone box that Terry Britten (Twilights) had brought back to Australia from England which mimicked the sound of cars approaching the hitchhiker on the highway. Bobby Bright has revealed that Treble was unaccustomed to operating the fuzz tone pedal while striking the note, so Bright would lay on the floor in front of him in the studio and when the time came for the fuzz tone, he would hit the pedal with his hand. (Craig Horne “Daddy Who?” 2018)

The song was hugely successful and delivered the duo’s first #1 hit in Australia and a #4 in NZ.

Hitch Hiker became the 4th biggest-selling record of 1966 beating off challenges by the Rolling Stones, Beach Boys, the Beatles, and the Troggs.

Promotion of the record was boosted at the time as the boys were hosting the ABC TV show It’s A Gas, however this would prove to be a double-edged sword, as the duo decided to change the name of the show to Dig We Must, to appeal to a more mature and sophisticated market, with a twelve-piece orchestra, and a troupe of dancers.

It was a mistake, the name change was greeted with derision, their teen fans moved on, the show was cancelled, and Bobby and Laurie fell out over the matter, and did not re-enter the charts again until 1969’s The Carroll County Accident.

The Rondells also disbanded, Duncan and Young joined the Laurie Allen Revue whose featured vocalists were Colleen Hewitt and her sister Glenys, Wayne ultimately teamed up with former MPD Ltd. guitarist Mike Brady and toured US bases in Vietnam but got way too close to the action during the Tet Offensive and headed back home.