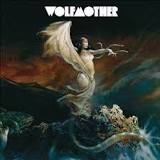 Retro-rock was in full swing in Australia in the noughties, Jet were successfully re-inventing the Motown sound of the Supremes and Martha and the Vandellas; the Rogue Traders were artfully appropriating the power chords of Elvis Costello, The Knack, and Tears For Fears, the Vines were plumbing the angsty depths of Nirvana’s grunge, and Wolfmother were tearing up the charts here and overseas  with chords, riffs, psychedelic lyrics, a mystical persona, and cock- rock pretensions reminiscent of Led Zeppelin, Black Sabbath and Deep Purple.

The trio of Andrew Stockdale (guitar/vocals), Chris Ross (bass and keyboards) and Myles Heskett (drums) all came from design/arts backgrounds and after jamming and practising for several years they formed the band in 2004.

Chris Ross suggested the name Wolfmother, and they played their debut gig at the Vic in the Park Hotel (Syd) in April of that year.

Signed locally to Modular Recordings, their debut release was the EP Wolfmother, recorded in the Ghetto Studios with producer Jim Diamond in Detroit, it climbed to #29 on the charts, and attracted the attention of the Universal Music Group, with whom Wolfmother inked an international recording contract in 2005. All four tracks on the debut EP – Dimension, Woman, Apple Tree and White Unicorn – would reappear on the group’s debut album in 2005.

Early Wolfmother songs are credited to all three members of the band but Stockdale was the creative force within the group, he was also the dominant vocalist, his high-pitched howls echoed the pained vocal gymnastics of Robert Plant and Ozzie Osbourne. All the band members sported matching Afros, and their live repertoire of kicks, jumps and Rock God poses came straight from the heavy metal band playbook of the 1970’s, which Wolfmother both emulated and parodied. 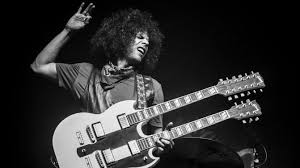 In May 2005 the band went into the Sound City recording studios in Los Angeles with producer Dave Sardy who had previously worked with Jet, producing their debut album Get Born and playing guitar on their smash single Are You Gonna Be My Girl, he also produced albums for Oasis (Don’t Believe the Truth) and the Dandy Warhols (Thirteen Tales From Urban Bohemia). The eponymous album quickly climbed to #2 on the local charts, it would also chart well overseas making #25 in the UK and #22 in the US, #8 in Norway, top thirty in Holland, Sweden and Finland, and sell over 1.5 million copies, occupying the local album charts for an incredible 78 weeks.

The album’s cover art, “The Sea Witch” by Frank Frazetta, comes from the mythical, other-worldly occult genre, populated by nymphs, serpents, and white unicorns in dark and stormy landscapes, much favored by Zep and the Sabs thirty years before, and in more recent times by Meatloaf, who added demonic motorcycle mayhem flourishes to the mix. The band reinforced these themes with such exotic album tracks as Where Eagles Have Been, Tales from the Forest of Gnomes, Witchcraft and White Unicorn.

Mind’s Eye was generally regarded as an instant classic with a convincing retro ambience, it featured a great keyboard solo by Chris Ross at the bridge and the promo video has been compared to Pink Floyd’s Live at Pompeii concert video.

Woman was a hard-charging Zep-wallop of a song, a real blues stomper that featured powerful fuzz-tone guitar, thumping percussion, and echoed warbling vocals by Stockdale. The song has been variously attributed to Stockdale’s former girlfriend who dumped him, or the city of Sydney and its glorious harbor, whose natural beauty inspired Stockdale to pen the song, either way, Stockdale was couch-surfing with friends when Wolfmother picked up a Grammy Award for Best Hard Rock Performance at the 49th annual awards.

The second single lifted off the album was White Unicorn, the opening riffs recall Led Zeppelin’s more restrained and sensitive side evident on the first half of Stairway to Heaven, along with some very attractive chiming guitar melodies, soon followed by the more typical Wolfmother driving percussion and rock riffs, it charted #25 locally.

Joker and the Thief was the sixth and final single released from the debut album, it was a radio-friendly song with a standout funk and groove to it, which ensured that it became the most popular single issued by the band, charting at #14 locally and #27 in the US. The song was inspired by the lyrics of Bob Dylan’s All Along the Watchtower, “There must be some kinda way outta here, Said the Joker to the Thief”, a song popularized by Jimi Hendrix.

Stockdale had deliberately set out to write a stadium rock song with a big intro and a riveting riff, a la Thunderstruck by AC/DC, and he succeeded.

Although sometimes lampooned as an “Aussie” Osborn clone, Stockdale is a cut above the average stoner lead singer, he forsakes the standard cave man grunts, and growls, and sings in tune. But there were few guitar solos on the debut album, Stockdale was no Hendrix-like guitar virtuoso and Wolfmother’s songs are not generally infused with the white boy boogie blues of the 70’s genre bands who had been their inspiration.

By now Wolfmother’s music had become a cross- media exploitation phenomena, with their songs featuring in video games (Guitar Hero 2, Motor Storm, Pure, Need For Speed, Project Gotham Racing 4, etc) movies (Jackass 2, Shrek the Third, The Hangover, etc), and commercials (Mitsubishi and Peugeot cars).They played notable gigs at such legendary festivals as Reading, Lollapalooza, Coachella, Big Day Out and Splendor In The Grass in a frenetic touring schedule that was taking its toll on the band.

In August 2008 co-founding members Ross and Heskett left the band due to irreconcilable personal and musical differences, in short, they realized that Wolfmother had always been an Andrew Stockdale solo project, and so it would remain. Stockdale appropriated the band name, recruited replacements, – guitarist Aidan Nemeth, drummer Dave Atkins, bass/keyboards Ian Peres- to form a new quartet who initially performed some original material under the pseudonym White Feather.

The re-formed Wolfmother 2 started work on their next album, Cosmic Egg in Brisbane’s Valley Studios, the album title was a reference to a yoga pose of which Stockdale was aware. The album was ultimately recorded at the Sound City studios, Los Angeles, with experienced Brit producer Alan Moulder, it successfully charted in Australia at #4, UK #35 and US #16, and again notched up sales in excess of one million. Two singles lifted off the album failed to impress locally, Back Round at #96 and New Moon Rising #51.

The early criticism of Wolfmother as derivative Led Zeppelin clones, despite international critics generally eulogizing their first two albums, had a lot more to do with the Australian national obsession with “cutting down tall poppies” than valid criticism of the group’s music.

Rebirthing a riff or melody is not the issue, it’s what a band does with it that counts, and Stockdale did create some impressive songs which increasingly the band performed professionally and convincingly.

The same could be said of other bands who have also been branded Zep-clones, such as Whitesnake, Heart, Aerosmith, Soundgarden etc; and let’s not forget that the masters themselves, Led Zeppelin, have had to retrospectively settle claims of plagiarism with black bluesman Willie Dixon for such songs as Whole Lotta Love and I Can’t Quit You, as well as Anne Bredon for Babe I’m Gonna Leave You. Originality may well be over-rated, and what comes around goes around again, like a record, and will continue to do so, as Wolfmother so convincingly demonstrated.