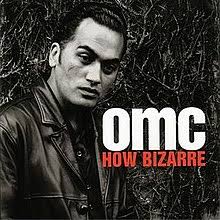 It would be fanciful to think that three guys from Auckland could collaborate for the first time and produce an international hit that would sell over two million records and hit #1 in five countries – New Zealand, Australia, Canada, Austria, and the USA – but they did, how bizarre?

Pauly Fuemana came from the largely Polynesian suburb of Otara in South Auckland surrounded by Pacific island church and soul music, he and his brother Phil formed the Otara Millionaires Club in 1992, the band’s name was a facetious reference to Otara which is one of the poorest suburbs in Auckland.

Alan Jansson was a music industry insider with songwriting and production skills, he had already produced local NZ hits, including a top five hit with Pulsing in 1982, as a member of synth-pop band Body Electric.

He had worked with Simon Grigg who was a band manager, DJ, club owner and A&R manager, Jansson and Grigg were aware of Pauly Fuemana, and the team behind How Bizarre gradually came together.

Re-named OMC, the group comprised Fuemana and Jansson when they signed to Grigg’s Huh! Record label in 1995, Jansson developed the musical accompaniment and arrangement around the basic lyrics provided by Fuemana.

The song is quirky and combines the different musical influences of pop, rap, Latin, and islander rhythms by juxtaposing metronomic beats with mariachi trumpets and brass, acoustic guitar, harmonica and Fuemana’s south seas islander version of rap, sandwiched between the breathy backing vocals of Seena Sipaia.

Lyrically the song is quite accessible “Brother Pele‘s in the back/ Sweet Seena’s in the front/ Cruising down the freeway/ In the hot, hot sun” but it’s also cryptic “Ringmaster steps up/ Says the elephants left town/ People jump and jive/ And the clowns inch back around .” This was a reference to a goal break, with the police in hot pursuit of the escapees.

The promo video featured Pauly, Seena and brother Pele in a red convertible Chevrolet Impala cruising the town, dancing, rapping and Pauly breathing fire; a second video was shot on a sound stage at Ellerslie Racecourse and was also on high rotation in the US throughout 1997.

The song was an international smash hit, it stayed on the Australian charts for 24 weeks and was the fifth biggest-selling record of 1996 outperforming such acts as Oasis, Savage Garden, and Toni Braxton in the process.

A follow up hit proved elusive for OMC outside of New Zealand, Right On charted at #63 in 1996 and they took Land of Plenty to #4 in their homeland but the group was disintegrating and in dispute with Grigg over royalties and between Jansson and Fuemana over songwriting royalty entitlements, sadly Pauly Fuemana passed away in 2010.

How Bizarre is generally regarded as the biggest One-Hit Wonder in NZ recording history, given the enormous success OMC enjoyed internationally with the song, and their complete disappearance from global charts after their debut hit.