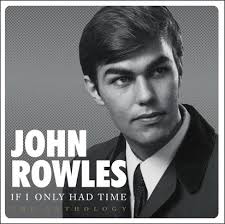 John Rowles was born in Kawerau (New Zealand) in 1947 of Maori and Caucasian parents, he started singing professionally in Auckland at the age of sixteen, in 1963 he relocated to Australia and took up a residency singing at the Riverside Inn in Melbourne. By 1966 he had moved to Sydney, signed up with Sunshine records, engaged Graham Dent as manager and secured appearances on New Faces of 1966 and Bandstand, his early records were released under the name of JA-AR and were not successful.

The following year he relocated to the UK where he met producer Mike Leander who was impressed with Rowles resonant baritone voice and saw an opportunity for him to replicate the success of such balladeers as Tom Jones and Engelbert Humperdinke who were charting strongly internationally.

Leander was aware of a song that had been a hit for French singer Michel Fugain named Je n’aurai pas le temps or If I Only Had Time, co-written by prolific French lyricist Pierre Delanos whose collaborations with Gilbert Becaud had produced two other famous English language song versions – Je t’appartiens as Let It Be Me and Et maintenant as What Now My Love?

Jack Fishman was recruited to translate the French into English lyrics and John Rowles went into the recording studio in London to record If I Only Had Time.

The song is anchored on an insistent piano riff supported by lush string-laden orchestration and guitars and drums, the arrangement exemplifies the tone and resonance of the Rowles baritone which is the other instrument on display here. This song was a huge international breakout hit for Rowles when it charted #2 NZ and the Netherlands, #3 UK, #6 Australia, #15 Germany and #17 Austria

Rowles followed up later in 1968 with another lushly orchestrated ballad, Hush…Not A Word to Mary, written by Brits Mitch Murray and Peter Callander who had enjoyed great success with several hits for Paper Lace – Billy Don’t Be A Hero and The Night Chicago Died as well as The Ballad of Bonnie and Clyde for Georgie Fame.

This was another Humperdinke-style ballad, strings, percussion, and guitars dominate with support from female backing singers, possibly a song about infidelity, but the lyrics are coy, and any such inferences are only subtle. “Mary” was a popular name  for song writers of the period, Johnny Mathis had anguished over his philandering in What Will My Mary Say (’63), Marty Robbins had ditched his Devil Woman (’62) to return to his true love Mary, the Everley Brothers wanted someone to (Take A) Message to Mary (’59) but not tell her they were in gaol, the Association were pleased when Along Comes Mary (’66), Jimi Hendrix knew that The Wind Cries Mary (’67) and CCR waxed lyrical about a Mississippi paddle steamer called Proud Mary (’69).

Hush… was a #9 hit in New Zealand and also performed well in the UK at #12 and in Australia #13, Rowles continued to chart strongly in New Zealand with follow up top ten hits with The Pain Goes On Forever (’69) and M’Lady (’69), and he had just composed a song inspired by his sister to perform at an international song festival in Rio de Janeiro, which would become his next hit single – Cheryl Moana Marie.