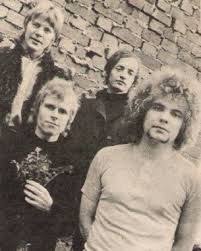 Doug Parkinson was born in Waratah (NSW) and after briefly flirting with a journalism cadetship became a full-time performer with such early bands as Strings and Things, A Sound, and the Questions, who were regular performers at the Manly Pacific Hotel and released several singles which failed to chart. In 1968 Parkinson formed In Focus with Billy Green (guitar), Duncan McGuire (bass), Doug Lavery (drums) and Rory Thomas (keyboards), who signed with EMI Columbia and released the psychedelic I Had a Dream in May ‘68 but without success, by the time the band went into the studio to record their cover version of Dear Prudence in 1969, both Thomas and Lavery had departed, leaving Parkinson, Green, McGuire and new drummer Johnny Dick, which became the classic In Focus lineup.

Dear Prudence was written by John Lennon at the Maharishi Mahesh Yogi’s ashram in Rishikesh (India) in February 1968 where the Beatles and their partners had gathered with Donovan, Beach Boy Mike Love, Mia Farrow and her younger sister Prudence and others to learn about transcendental meditation.

Young Prudence had become so fanatical about the giggling guru’s teachings that she had locked herself in her chalet, to try and speed up the process of “getting cosmic”.

John and George were concerned about her mental state and tried to coax her out to join the group by serenading her with a song that John had written, that song was Dear Prudence.

The Beatles recorded the song in a wistful acoustic folk-guitar style with deceptively simple nursery rhyme lyrics – “The clouds will be a daisy chain, so let me see you smile again” and the refrain … “Won’t you come out to play?” There are also references to the sun, the sky and birds singing inspired by the natural beauty of the camp’s idyllic setting at the foothills of the Himalayas. The Beatles included the song on their Double White album and recorded it at Trident Studios in London in August 1968, Paul McCartney played drums on the track as Ringo had temporarily left the band, and he also provided flugelhorn, piano, cowbells, tambourine, and handclaps to the mix.

But the Beatles never released the song as a single and it was not until Doug Parkinson and his band In Focus re-birthed the song in 1969 that its individual appeal shone through.

Doug Parkinson possessed one of the most uniquely soulful voices in popular music and he was ably supported by the very talented trio who comprised In Focus. This version is electric guitar- based, and Green plays both lead and rhythm sections, but it is no less poignant than the Beatles original. Green’s opening guitar refrain is assured and leads into Parkinson’s vocal entreaty to Prudence, the vocals are restrained and never overwrought, and the song closes with the same opening guitar chords.

Dear Prudence, was the first major hit for Doug Parkinson, when it charted at #5, and he followed up later in the year with a double-A side hit Without You/Hair which charted #4.

Doug would ultimately find a niche for his unique talents in musical theatre in the coming decades in such productions as Tommy (’73), Jesus Christ Superstar (’73), Ned Kelly (’77), Big River (’90), and the Buddy Holly Story (’91).