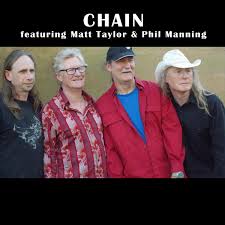 Chain were originally formed by Phil Manning and Wendy Sadington who took the band’s name from an Aretha Franklin classic Chain of Fools, by the time this song was recorded only Manning remained from the original lineup. Matt Taylor was recruited as lead singer/harmonica player along with Phil Manning (guitar), Barry Sullivan (bass) and Barry Harvey (drums).

Chain’s  reputation as a great blues/rock band grew with each legendary performance at such Melbourne pub venues as the Village Green and White Horse Hotels, they did not sound or look like their pop star contemporaries, Taylor was a skinny, balding, unprepossessing blues-wailing front man who took the delta blues in which he was steeped and imbued it with an Australian wit and vocal resonance. They gained further attention with appearances at the many music festivals springing up around the country at Ourimbah, Wallacia and Myponga, and were recognized as the premier progressive blues unit in the country.

They recorded the original version of Black and Blue in the Festival Studios in Sydney in early 1971, at their first rehearsal the song emerged from a jam session started by Phil Manning strumming some opening chords and Taylor picked up on the work song feel of the intro, the song was originally called We’re Groanin’.

The grunting, grinding chain gang persona of Black and Blue, was graphically captured in the work song chant of the backing singers, rattling chains, crunching pickaxes, the keening vocals of Matt Taylor, bluesy guitars of Phil Manning and Barry Sullivan and pounding percussion of Barry Harvey –  “You broke my back cos I spat on a guard (we’re groanin’) /Don’t make me no better you just make me harder (we’re groanin’) Your water stinks cos it comes from a bog (we’re groanin’)/ And the slop you feed us ain’t fit for a dog (we’re groanin’)”.

Originally inspired by the convict chain gangs of colonial Australia there is a stirring verisimilitude and menacing sensibility about the record that was unique for its time and stirred the hearts of suburbanites like few other blues records had been able to do. It exploded onto the charts in Melbourne where it hit #1 very quickly and #12 nationally, Chain’s seminal blues album Toward the Blues hit #6 later the same year, recorded in Melbourne at the TCS Studios with co-producer/engineer John Sayers in just three days, it contains a re-recording of Black and Blue, and remains to this day the definitive Australian blues album of all time, the Manfred Mann Earth band covered Black and Blue on their 1973 album Messin’.

Within months of their chart success, and after becoming the first group signed to Mushroom Records, the famously restless Chain had splintered and headed in different directions, however Chain and Matt Taylor continued to evolve and remained synonymous with quality blues rock in various incarnations to this day. A TV performance of this song by Chain indicated that Matt was not entirely comfortable in that environment, as he took the harmonica out of his jacket pocket to play he forgot that it was still in its case, he casually carried on though, like a trouper.