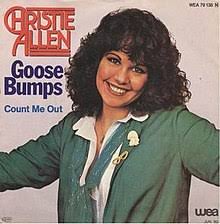 In 1965 Christie Allen and her family emigrated from the UK and settled in Perth (WA), Christie was eleven years old and with her three brothers, formed the family band Pendulum, and performed at gigs around Perth. She was fortunate to meet another UK expat Terry Britten, former lead guitarist with the Twilights and an emerging songwriter/producer in his own right.

Britten had already written hit sings for Zoot, and the theme song for Tim Burstall’s film 2,000 Weeks, but he had relocated back to the UK in the late 1960’s where he gigged with  ex-James Taylor Move alumni Kevin Peek, Alan Tarney and Trevor Spencer in the band Quartet.

When Britten moved back to Australia in the mid-1970’s and saw Christie Allen perform, he had already co-written two bona fide hits for Cliff Richard – Devil Woman and We Don’t Talk Anymore – and he was impressed with Allen’s vocal ability and bubbly personality.

Christie was signed to Mushroom Records in 1978 and accompanied Terry Britten to the UK where they recorded her debut album, Magic Rhythm, in the Slater Sound/Mayfair studios in London. The album contained seven tracks co-composed by Britten and Brian Robertson, another three tracks were Terry Britten songs. Robertson was a regular collaborater with Britten and had also written hits for Cliff Richard (Carrie and Wired For Sound) and Mike Rutherford of Mike and the Mechanics (The Living Years).

With the release of the disco-dance number Goosebumps, aided by regular Countdown appearances, the record climbed to #3 nationally, and Allen quickly became the biggest-selling artist on the Mushroom label.

Christie had a strong teenybopper appeal, her songs were catchy and hook-laden but essentially assembly line pop, Goosebumps lyrics included the line “cardiac-arrested stare” which was probably memorable for the wrong reasons.

Christie Allen followed up with the fourth single release from her album, the catchy soft pop song He’s My Number One, the session musos were accomplished, Terry Britten performed on guitar, bass and provided backing vocals, Graham Jarvis (drums) and Paul Westwood (bass) formed the core rhythm section with Billy Livesy on keyboards. Lyrically the song was pedestrian and the rhyming word phrasebook got a workover in the process – “he’s a classic example, such a beautiful sample, he’s my number one, he’s the love that I treasure, I could go on forever…” ( and unfortunately she did), but it had a real Abba/Stock/ Aitken/ Waterman vibe to it, and the fans sent it to #4 on the charts.

Christie continued to feature regularly on Countdown and promoted her records on tour with the Hot Band, she would have no less than five top 40 hits in a solid career which was cut short due to ill health.

Sadly, Christie Allen passed away in 2008.