Lead singer and songwriter Ray Dorset wrote the song that became the breakthrough hit for UK band Mungo Jerry whose name was inspired by a character in T.S Eliot’s Old Possum’s Book of Practical Cats whose real name was Mungojerrie, but a spelling error crept in during the recording process.

Pye Records were looking for bands that were offbeat and progressive to make left-of-centre hit records and in 1969 they set up subsidiary label Dawn, and recruited such acts as Titus Groan, Demon Fuzz, and Sage but it would be the boogie jug band Mungo Jerry that scored the first two consecutive UK #1 hits for the label, with In The Summertime and Baby Jump. Below- Mungo Jerry 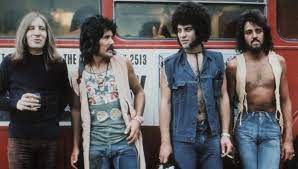 Dorset had been inspired by the summery vibe of the Canned Heat’s Goin’ Up the Country, but his original efforts were too short to reach the three minutes in length required to qualify for double songwriting royalties, as the regulations decreed in the UK at the time. The producer Barry Murray then contrived to get the sound engineer to drive his car past the studio and they recorded this sound effect and added it to the record to achieve the required playing time, the sound effects stayed in and were also included in the Mixtures cover version. Below- Mixtures 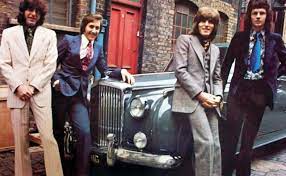 The Record Ban ensured that the Mungo Jerry version of the song wasn’t going to get the same amount of airplay as the Mixtures cover version, so the band jumped at the chance to record it—although lead vocalist Idris Jones declined to sing on it, feeling that it was too ‘poppy’, so bassist Mick Flynn performed the lead vocal. Despite the ban Mungo Jerry would share #1 spot on the Australian charts with the Mixtures, and while the Mixtures would score a huge international hit with their sound-alike follow-up The Pushbike Song, Mungo Jerry’s follow-up Baby Jump stiffed here, although it was a UK #1 and they did return to the local charts with Lady Rose in 1971 which they took to #14.

The Mixtures were a Melbourne-based band who featured Buddy England and Idris Jones amongst others in a transient line up, but by the time they recorded this song they comprised Idris Jones (lead vocals), Mick Flynn (bass), Gary Howard (drums), and Fred Weiland( guitar); Buddy England had moved onto the UK, and would ultimately replace Bruce Woodley in a re-formed  Seekers lineup in 1977. The music clip was a monochrome pastiche of the band and four girls cavorting around St. Kilda beach, taking a spin in a dune buggy, sharing a Chocolate Gaytime ice cream, intercut with follow-the-bouncing ball lyrics, and amateurish animation, it was charming and amusing in a cheap and cheerful kinda way. Below – Mixtures

The band scored heavily in Australia hitting #1, with this cover of the original piano-driven, jug band recording by Mungo Jerry, their version was ranked at #3 on the annual best-seller charts for 1970, and the Mixtures became the most successful act signed to Ron Tudor’s new Fable label. They blazed a trail for cover versions of other UK songs that was gleefully followed by other Fable labelmates including Jigsaw, the Strangers, Liv Maessen, Frankie Davidson and Fourth House, a session-only group who had a #16 hit in 1970 with a cover of Cat Steven’s Wild World, with former Wild Cherries vocalist  Danny Robinson on lead vocals.

Given that there is no more sincere form of flattery than imitation, the Jones brothers Idris and Evan sat down and wrote another free-wheeling summery song in the same bubblegum pop/jug band style as Mungo Jerry, The Pushbike Song was a very big hit, charting at #1 in Australia, #2 in the UK, #31 in Canada and #44 in the US.

Musically the song moves along at the same tempo as a bicycle with appropriate sound effects to imitate the efforts of the riders and the turning of the wheels, the pursuit of true love has never been so simply and effectively reduced to the equivalent of a passionate peloton.

An early black and white music video was produced to promote the record which depicted band members and friends riding bicycles around Melbourne, the video is notable for the daredevil and seemingly reckless nature of the stunts.

The cyclists include a penny farthing and a roller skater proceeding down a busy six lane arterial road without any apparent police escort and then across the King Street bridge on their bicycles mounted on top of a car transporter travelling at speed!! The video was obviously shot prior to the introduction of compulsory protective helmets and most definitely before any basic OHS guidelines were imposed. There was a second music clip made for this song for the Paul Hogan Show, which starred Karen Pini (runner-up Miss World 1976) and had all the slapstick qualities of a Benny Hill Show skit, the stunts are worth watching, and it was a time capsule of prevailing attitudes.

Only George Harrison’s My Sweet Lord stopped the Mixtures hitting #1 in the UK, but this song would be their last major hit.