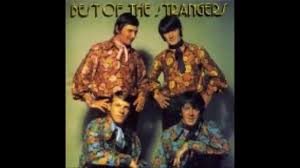 Melanie Makes Me Smile (B Mason/A Macauley) – The Strangers 1970

The Strangers were one of Melbourne’s most sought-after backing and session bands in the 60’s lending solid support to such solo artists as Colin Cook, and Merv Benton. They emerged as credible recording artists in their own right in the 1960’s- 70’s, when the band’s classic formation comprised John Farrar (lead guitar/vocals), Terry Walker (lead vocals), Fred Weiland ( rhythm guitar), Peter Robinson (bass) and Graham Thompson (drums) .The band had hits with their cover of The Five Americans  Western Union which they took into the charts in 1967, Happy Without You a former hit in the US for The Sound Judgement, which was a #28 for the Strangers in 1968 as well as the Bruce Woodley/Hans Poulsen composition Lady Scorpio which charted #31 in 1969.

Their cover of the Edison Lighthouse UK hit, Melanie Makes Me Smile, was a brassy, big band production which  became their biggest hit when it went to #10 in June 1970, and they become one of the early beneficiaries of the Record Ban that was in place between April- November of 1970.

There was also a rift between artists and producers in the UK at this time, as many producers felt that performers were less than professional in their attention to writing and recording songs, and performers accused the producers of constantly “manufacturing” records devoid of soul and creativity. The writers of Melanie Makes Me Smile, Barry Mason, and Tony Macauley, decided to create their own session-only groups to record their songs, and Edison Lighthouse was a classic example of such a group, their lead vocalist was Tony Burrows, former front -man for a group known as the Kestrels, who had become a jobbing session singer and performed lead vocal duties for no less than six groups who charted in the 1970’s – Edison Lighthouse, White Plains, First Class, The Pipkins, The Flowerpot Men and Brotherhood of Man.

The BBC ultimately banned Burrows from appearing on Top of The Pops because of the potential confusion caused by the same lead singer potentially fronting six groups and dominating the program, nevertheless he did actually sing all the songs, unlike a duo who would appear on the show in the 1980’s and never ever sang a single note – Milli Vanilli.

John Farrar was a very competent guitarist and vocalist and he would soon emerge as a world class songwriter, arranger and producer after he joined his girlfriend Pat Carroll in London, and became a trusted musical collaborator and successful songwriter with Olivia Newton-John throughout the 1970’s and 80’s.