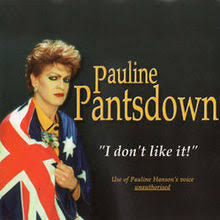 Simon Hunt, professionally known as Pauline Pantsdown, is an Australian satirist and sometime Senate candidate who has frequently parodied Pauline Hanson, a controversial member of Federal Parliament, in 1997, 2016 and 2019. Simon began playing in bands at the age of 12 and was influenced by the arts-activist campaigns of such groups as ACT UP, he is the son of David Hunt, a retired Chief Judge of the NSW Supreme Court.

Prior to his drag queen parody of Hanson, he had successfully lobbied the Office of Film and Literature to have homosexuality removed from its list of “adult themes” and had also produced a comic parody collage of comments by right-wing moral rights campaigner Fred Nile.

As Pantsdown his taste in fashion and verbal tics are a parody of Hanson which he has featured in two recordings – I’m A Backdoor Man in 1997, which set Hanson’s voice to a rock beat which included the lyrics “ I’m very proud that I’m not natural/ I’m a backdoor man for the Ku Klux Klan with very horrendous plans… I’m a backdoor man/ I’m homosexual/ I’m very proud of it”. 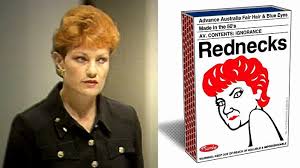 The song was a huge hit on the youth radio network Triple J following its release, being played almost hourly and ultimately making it into the 1997 Hottest 100 list at #5. However, less than a week after its release, Hanson obtained a court injunction against the song, claiming it was defamatory as it portrayed her as a prostitute and a transsexual, a decision later upheld by a Queensland Court.

But the perils of Pauline continued, Pantsdown took legal advice from showbusiness lawyer, Owen Trembath, and re-wrote the lyrics to the song I’m A Backdoor Man, which emerged as the hit song I Don’t Like It in October 1998. Its lyrics are all Hanson’s own words, although not always in the order she uttered them, and in her own voice, set to a pop beat. With a disclaimer on the CD cover that the use of Pauline Hanson’s voice is unauthorised, the song begins: “I don’t like it when you turn my voice about. I don’t like it, when you vote One Nation out. My language has been murdered, my shopping trolley murdered, my groceries just gone.” She goes on: “Please explain, why can’t my blood be coloured white? I should talk to some medical doctors/ Coloured blood, it’s just not right.” And she ends, “I don’t like anything, I can’t do anything about it. No, the whole thing is wrong, and it stinks and I don’t like it.” It was a national hit and climbed to #4 on the ARIA charts in September 1998, the lyrics reflect Hunt’s perception of Hanson as the personification of the politics of complaint, endlessly complaining about immigrants, foreign companies and Aborigines getting assistance from the state, and more recently Muslims, while offering no positive solutions.

The promo video clip featured Simon Hunt as Pauline Pantsdown dressed as Pauline Hanson, singing the song to the camera in a number of scenarios; including in her office, her fish and chip shop and in a gay bar with Asian backing dancers

Despite the best efforts of Pauline Pantsdown, following the most recent Federal election in 2019, One Nation in fact grew their vote on the back of overt Islamophobia, despite running a completely bizarre campaign which exposed their senior decision-makers as willing to take donations from the US National Rifle Association (NRA) in return for campaigning to water -down Australia’s tough gun laws. Hanson subsequently broke down on national television in a way that made One Nation look chaotic, incoherent, and leaderless, yet against all received wisdom about this party, in the end it had the opposite effect, particularly in Queensland, where One Nation increased their vote.

In 2004, on the Rock Against Howard compilation, Hunt released the song I’m Sorry under the pseudonym Little Johnny, which had appeared as a download on his website earlier in 2000 with a video. This song used the same techniques to parody John Howard‘s refusal to apologize to the indigenous people of Australia over the Stolen Generation.

Simon Hunt has contested State and Federal seats in elections as Pauline Pantsdown after changing his name by Deed Poll, but most of the time he is a lecturer in Media Arts at the University of NSW College of Fine Arts. 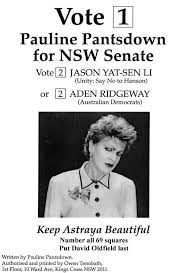