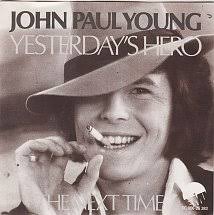 John Paul Young or “Squeak” as he was known to ABC TV’s Countdown viewers was a regular on charts throughout the 70’s, propelled along on the strength of Vanda and Young compositions from the Alberts House of Hits assembly line.

JPY had a similar lineage to the Young family as he was a Scot who had lived only streets away from the Youngs’ in Glasgow, even though the families weren’t related, his family emigrated to Australia in 1966 and were housed at the Eastern Hills Migrant Hostel (Syd).

After a stint with the band Elm Tree, Young decided that a career in music was preferable to working with sheet metal, he auditioned for and won a part in Harry M. Miller’s Sydney production of Jesus Christ Superstar, and performed in the role of the high priest Annas for two years.

Around this time JPY met Simon Napier-Bell (see picture below) of Alberts, a very experienced UK songwriter/producer who was consulting to Alberts in Sydney at the time, he had co-composed the 1966 Dusty Springfield hit You Don’t Have to Say You Love Me, managed the Yardbirds, produced hits for the Scaffold and T Rex, and would go on to manage Wham! and produce hits for Alison McCallum (Superman) and mentor Paul Gray of Wa-Wa-Nee.

George Young had already sent his vocal demo of Pasadena, recorded in London, to Ted Albert, and it was George’s version that  had to be replicated, initially the song was given to Sydney band Pyramid who had enjoyed success with a recent hit  I Can’t Wait for September, but Alberts were not happy with their version and it was never released.

The next singer approached, was Andy Imlah of Malcolm Young’s band Velvet Underground, but he couldn’t spare the time to go to Melbourne to record the song. Napier-Bell then offered the song to JPY and instructed him to mimic the George Young vocals, Napier-Bell arranged for Young to join him at the King St offices of Alberts, the Brit played the piano and in his memoirs JPY -The Autobiography (2019) recalled the session: 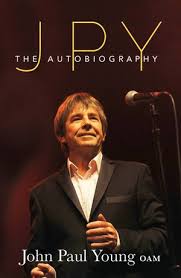 “ I struggled to hit the high notes in the key change of Pasadena,” they made Young’s debut solo record the next day at the Armstrong Studios with Bill Armstrong and Roger Savage, and the backing of the Melbourne Symphony Orchestra, Young recalls his discomfort “ I completely ran out of breath at the end of the song and consequently the final chorus of Pasadena is sung by George Young without the addition of my voice. It still amuses me to this day that my first release was a de facto duet and that the other vocalist, one of my heroes, had no idea about what was transpiring” – it became a #16 hit for JPY.

JPY’s next chart success was lifted from his debut album Hero, from which the hit single Yesterday’s Hero was released, it was another Vanda /Young composition straight off the Albert’s hit factory production line. A lively bombastic song which incorporated audience sound effects, a sharp sound on the beat just as the chorus approached made by hitting a screwdriver onto the edge of a glass ashtray, and “news bulletins” about the rise and fall of the pop star protagonist of the song performed by Albert’s A&R man Chris Gilbey, and two of JPY’s  former Jesus Christ Superstar fellow cast members Michael Caton and Joe Dicker. Clearly the song referenced the personal experience of Harry and George during their teen idol days with the Easybeats, followed by their fall from stardom.

The record was given a boost by JPY’s appearance on Countdown where compere Meldrum had organised a “flash mob” of fans to chase the diminutive pop star around Melbourne, drag him off-screen whilst performing in the studio, and reduce his new shirt to a pair of cuffs as he tried to mime the song without a microphone. In doing so he conferred genuine hero status on the singer and enabled him to take this simple tale of the vagaries of life after pop stardom fades, to #8 in March for Young’s biggest hit to date.

Countdown’s Michael Shrimpton recalled the impact of “Squeak’s” appearance on the show and the subsequent chart success of the record “Yesterday’s Hero was just lying there. No one had picked it up. It was lying there like a cold Weetbix, like so many Australian bands’ singles – not being played by radio. The power of the medium was quite daunting.” (Glad All Over – The Countdown years 1974-1987 – Peter Wilmoth 1993). The song was also Young’s debut international hit when it climbed to #1 in South Africa and #10 in Sweden, this would be the first of a string of hits that JPY would have in South Africa with another five top ten hits there between 1975-1977. Vanda and Young played all the instruments on the record and surprisingly it climbed to #42 on the US charts and was subsequently covered by the Bay City Rollers. 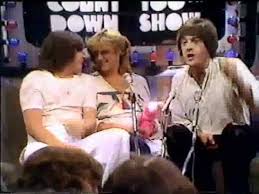 The Love Game became JPY’s second consecutive top ten hit when also lifted off the album, the song is uncomplicated pop, however the studio musicians were an impressive group and would form the core of the All Stars Band who would back JPY and Stevie Wright in the future – Warren Morgan provided catchy keyboard flourishes and the rhythm section of Ronnie Peel (bass) and Johnny Dick (drums) delivered the necessary drive and propulsion in support of Young’s accomplished vocals, it charted #4, and was backed with a convincing cover of the Easybeats former hit St.Louis.  At his Countdown performance of this song JPY gets close and personal with the fans and almost topples into the audience near the conclusion of the segment.