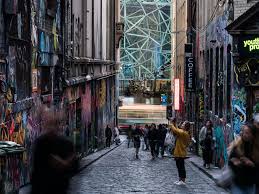 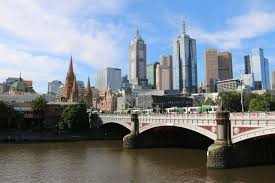 There is a tradition in both country and folk music that imbues songs with a sense of place, a unique identity which captures the culture and zeitgeist of a city, town or suburb, and the music is richer for the insights and authenticity that place reflects in both the lyrics and the melody.

The Brits sing about the working class towns of northern England, Woking was a Town Called Malice for Paul “The Modfather” Weller of the Jam, the Dream Academy were imagining Newcastle when they wrote Life in a Northern Town , the Clash recalled urban violence in Guns of Brixton,  Steve Marriott and Ronnie Lane of the Small Faces remembered a grimy plot of land they would bunk off to when they wagged school, called Little Ilford Park, that became better known as Itchycoo Park, and Paul McCartney paid a tartan tribute to the Mull of Kintyre. after he had more successfully celebrated several Liverpool locations in Penny Lane and Strawberry Fields Forever.

The Americans too were quick to incorporate their place names into song, Billy Joel recalled his working class roots in Allentown Pennsylvania, Joni Mitchell forever immortalised the summer of love in Woodstock, Bob Dylan did something similar with Highway 61 Revisited, Steve Earle had moonshiners and dope growers dodging the FBI down on Copperhead Road, Carol King and Gerry Goffin recalled their West Orange County home in New Jersey when they wrote Pleasant Valley Sunday for the Monkees, NWA came Straight Outta Compton, and Tony Bennett Left His Heart in San Francisco.

It took a while for our songwriters to embrace the place names and geography of our country, in 1962 Lucky Starr had a hit with a novelty song that listed  ninety-four  place names in a rhyming memory test kind-of-way, with I’ve Been Everywhere, the Joy Boys eulogised the Southern Aurora, our first uninterrupted  Melbourne to Sydney train service in 1962 with the instrumental hit Southern ’Rora, Johnny Chester hit the road and traced the towns along Highway 31 in 1969 and Lobby Lloyd of the Wild Cherries name checked “Melbourne” in his 1967 psychedelic epic That’s Life.

On the other hand, Brian Cadd then with Axiom, was doing his best to avoid being typecast as an Australian, by singing about Arkansas Grass  and then opening Ginger Man with the infuriating line “ She wrote to me from Texas… “ and then following up with “I heard from her in Utah…”, you mean Koo-We -Rup and Nar Nar Goon wouldn’t have been just as good…OK.  Brian claimed that our local place names didn’t rhyme well nor resonate like those of North America – but he was just trying to pitch his songs to a very large US market, hoping for a breakthrough hit there.

It is therefore surprising to learn that Melbourne is the Australian city most celebrated in song, despite being described as flat, dowdy, grey, and conservative, with a turgid river bisecting it. Its beaches don’t exude a tropical vibe, and the weather is changeable, the Beatles were inspired to write Rain, the B-side to Paperback Writer in 1966, after weathering a Melbourne rainstorm.

Yet it was voted the most Liveable City in the World for six consecutive years from 2012-2017, and second to Vienna in the last two years. The Austrian city does have the Sound of Music connection and world class strudels, but would you go there to enjoy live rock and roll? Yet Melbourne is never described as regal, venerable or majestic, it’s probably because it does not have a glistening harbor, nor one of the seven modern architectural wonders of the world plonked on its doorstep, like its flashy northern neighbour. But it is the sum of the many parts of the life, labours and pursuits of its citizenry, that create a unique and indefinable quality of a city that looks more European than any other in Australia, but is at its beating heart innately proud of its Antipodean heritage and way of life- its what’s inside Melbourne that counts.

Fortunately other local songwriters have had no difficulty in putting local place names front and centre in their songs, the Skyhooks Greg Macainsh produced over half a dozen songs, many of which were anchored in uniquely Melbourne locations – Balwyn Calling, Carlton (Lygon St Limbo) and Toorak Cowboy, were several, he acclaimed his hometown as an interesting, amusing, and acceptable lyrical subject, and in doing so opened the way for an entire genre : the Melbourne song.

Macainsh made his Melbourne songs social documents about specific aspects of the city, he dwelt on the details and so introduced a genuine folk element into Australian rock. In Carlton, he wrote of “pizza places” and the “spaced-out faces” of the suburb’s student population, and the “night-time junkies and long-haired monkeys” who trawled the nocturnal haunts of Melbourne’s Little Italy.  In Toorak Cowboy he parodied aimless, idle rich scoring a “matchbox-full” of  marijuana, outside the once-trendy South Yarra Arms Hotel, and referenced the then-trendy supper show at the “Trak Cinema”.

James Reyne followed Macainsh’s lead by name-checking one of Melbourne’s premier music venues, “Bombay Rock” in Brunswick, in Australian Crawl’s first hit, Beautiful People and rhymed the word “corseted” with the neologism (a non-existent word) “dorseted”, after the Dorset Hotel in Croydon where the Crawl regularly gigged. He followed up with the social satire of Hoochie Gucci Fiorucci Mama and skewered the pampered, carefully- coiffured socialites, who shopped and did lunch along Toorak Rd, South Yarra, and escaped to the Portsea back beach and the Mt Buller ski fields for seasonal attractions.

The city has many memorable meeting places, all jostling to be the “centre” of this rapidly-expanding conurbation, “meeting under the clocks” put Flinders St Station front and centre as a place for people to congregate, but the advent of the underground rail loop in 1980 reduced the commuter traffic via this historical gateway to the city. Federation Square is a johnny–come-lately contender with a brutalist architectural style that divides opinion and many see as incongruous in company with its nearest neighbours, the Gothic -inspired St. Paul’s Cathedral, the nineteenth century commercial/residential hybrid of Young and Jacksons Princes Bridge  Hotel, and the art nouveau-inspired  Flinders St Station. But the Bourke St Mall has strong claims to be as centred as you can be in Melbourne, buskers are active amongst the entrances to many grand retail outlets there, and they humanise the space, even though trams still bisect this pedestrian mall. 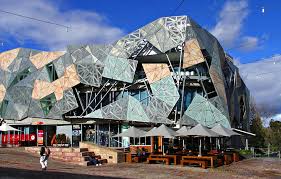 Paul Kelly’s best songs have often been about Melbourne, in From St. Kilda to King’s Cross, he was at an emotional crossroads in his life, relocating from one red light area in Melbourne to another in Sydney, battling a crippling period of writer’s block, divorcing his first wife, and still longing for the Melbourne he had left behind. Leaps and Bounds is Kelly’s quintessential love letter to Melbourne, and particularly the MCG and Aussie Rules football, he has played the song in front of 100,000 fans at the 2013 AFL grand final and will no doubt reprise this song when he appears at this year’s GF in 2019.

To Her Door is another of his classic Melbourne songs, the real story of what happens when the estranged couple meet after she left him and took the kids is never divulged. We learn how apprehensive the man is about the reunion, and the background to the break-up, as he takes a Melbourne Silver Top taxi from Spencer St Station (now Southern Cross Station), on a nervous journey to see his wife and family “Did they have a future? Would he know his children? Could he make a picture, and get them all to fit?”SPECIAL FEATURE

When I First Met Your Ma is a Kelly love song with a difference, the passion is heart-felt but the song is not being sung to the woman, it’s to the child the woman had with the singer before they parted. He traces their meeting and romance, name checks the Fitzroy Gardens, and after he is ejected from the girl’s home by her father, he “walked two miles in Melbourne rain/ I could have walked ten more/ When I first loved your ma.”

Stephen Cummings of the Sports reminded us that Russell St (above) used to be the home of the TV detectives from Homicide and Division Four, with (Boys) What Did the Detectives Say, Courtney Barnett’s song about her home town was a cynical take on how expensive it is for first home buyers in Melbourne  and particularly  the inner northern suburb of Preston in 2015‘s Depreston.

Frente! celebrated two equally important spelling errors by writing the hit Accidently Kelly Street, about a share house in Richmond, which was really in Kenny St, and the spellcheck also failed to pick up the incorrect spelling of “accidently” in the title, and Bon Scott recalled a night of passion with a full-figured woman by the name of Rosie whom he met in Melbourne, when he sat down at the Freeway Gardens Motel in North Melbourne and penned what would become the AC/DC live performance classic – Whole Lotta Rosie. If popular music has any real, lasting value beyond the ephemeral and passing pleasure it can bring, it lies in its ability to hold up a mirror to its devotees, to reflect the world in which the singer and the listener live. Songs about Melbourne have helped to explode the cultural cringe and broken down the barriers for songwriters to put local places and events in the foreground, so legitimising them in a way unique to where we live.

4TR this week looks in depth at four songs that are uniquely inspired by Melbourne – Paul Kelly’s From St. Kilda to King’s Cross, Things of Stone and Wood’s Happy Birthday Helen, Carlton (Lygon Street Limbo) by Skyhooks, and Depreston by Courtney Barnett.

Next week the 4TR AFL Grand Final Special will recall the artists who have performed at one of Australia’s great sporting events and celebrate the songs that have preceded that mighty roar, as the gladiators go into battle. 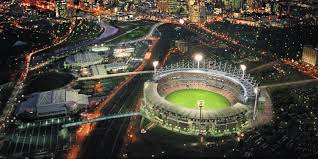