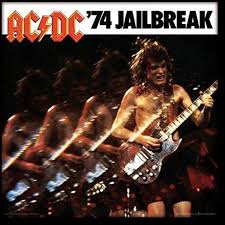 The albums High Voltage and TNT were released separately in Australia in 1975 and 1976 respectively, both were hits with TNT taking the band to #2 locally for their first top five hit album. The best tracks from these two albums would be combined to become the band’s debut international album, entitled High Voltage, released in 1976, it was a defining mission statement from AC/DC to the world at large, despite the dismissive reviews by some pundits.

The standout tracks on the international issue album were It’s A Long Way to The Top (If You Wanna Rock ‘N’ Roll) and Rock ‘N’ Roll Singer, lyrically these songs about dreams and heartache were about as introspective as Bon Scott’s “filthy poems” were going to get, there was also the dirty blues of The Jack, and two enduring anthems that would forever remain part of their live set – TNT and Jailbreak

The lyrics of TNT are pure Bon Scott, a day in the life of a man chasing sex, he’s a lover not a fighter, but if pushed he can be dangerous to handle, like dynamite. Scott even appropriated most of Bryce Courtenay’s line from the Louie the Fly advertisement for Mortein with the lyric “I’m dirty, mean and mighty unclean…”.

Produced by Vanda and Young at the Alberts Studios (Syd), like all AC/DC songs it was initially worked up by George Young with his two brothers Angus and Malcolm on the piano. The opening football ground chant off “oi,oi,oi,oi…” was the inspiration of George in the recording studio, it immediately grabs the listener’s attention and invites participation, the rhythm section of Evans and Rudd then drives the song forward.

Guitar Player magazine has attributed the stellar rhythm guitar technique of Malcolm to the fact that he played open chords through a series of Marshall amplifiers, set to low volume, closely miked, with little or no gain, contrary to the standard technique of loud and overdriven power chords, through a large amplifier stack.

The gritty, bluesy guitar riffs of Angus Young keep the song chugging along while Bon Scott, resplendent in tight denim and lurid body art on the Countdown clip, swaggered through the boastfully defiant lyrics.

By this time Angus was giving Bon Scott a run for his money in live performances, as aptly  described, by Rolling Stone journalist David Fricke “Angus does it all as he duckwalks madly through every song, bobs his head like a chicken in a trance and spins on his back, legs pumping the air, while dressed in an Aussie-schoolboy’s suit- shorts, cap, tie and jacket, just like those he wore to class in the early Sixties.” TNT peaked at #19 nationally and this was one of three hits for the band in 1976.

Lifted off the band’s second Australian album, Jailbreak was inspired by a newspaper article about an attempted jail break by famous Australian criminal Mark Brandon “Chopper” Read and his accomplice Jimmy Loughnan, both were subsequently caught and sent to solitary confinement. “Chopper” Read aspired to fame as a media personality following his release, becoming a published children’s book author and fascinating television audiences with his grimly humorous anecdotes about underworld personalities, Eric Bana memorably embodied the spirit, menace, and thuggish appearance of Read in the successful biopic “Chopper”.

The song has characteristic chugging riffs and an anthemic chorus, reminiscent of Them’s Gloria, the promo video, directed by Countdown’s Paul Drane and shot in a quarry in Sunshine (Melb.) cast band members in the roles of convicts and guards. OHS was not really observed on the set, several homemade explosives in orange juice containers were filled with petrol and loaded into a metal tube and fired like a cannon, the shots generated the appropriate amount of noise and smoke but also considerable heat which alarmed band members, particularly in the final scene when Bon and Angus, the escaping “felons”, break out of jail as the prison gates are blown up, with the “coppers” Evans and Malcolm in hot pursuit firing blanks at them, the “convicts’ emerged from the fiery exit, barely escaping serious burns.

But the explosions, fake blood, and dramatic sound effects all combined to propel Jailbreak to #10, the last line sums up the desperation and futility of a life of crime “…he made it out…with a bullet in his back!”

The band were now hitting the charts with their albums, their debut album High Voltage had sold 150,000 copies and TNT would climb to #2 nationally and sell over 300,000 copies. Internationally the band was also receiving positive reviews, Juke magazine described TNT as “an instructional manual for a rock and roll band.” Michael Browning, AC/DC’s manager, was now planning to break the band overseas, and with the help of his sister Coral, who was based in London at the time, this would happen much faster than anybody had anticipated.