The personnel changes going on within AC/DC at this time still resembled a revolving door, Vanda had returned to Sydney after producing the Blow Up Your Video album, but George Young commenced work on recording the Razor’s Edge album at the Windmill Lane Studios in Dublin.

Malcolm Young had taken a year off to dry out and rehabilitate himself at Onkaparinga, his stately, recently – acquired Balmain mansion in Sydney, and was replaced on rhythm guitar by his nephew Stevie Young (below), brother George’s son. Drummer Simon Wright and the band parted company and Chris Slade (ex-Manfred Mann Earth band) replaced him, Malcolm would however return to the recording sessions for Razor’s Edge. 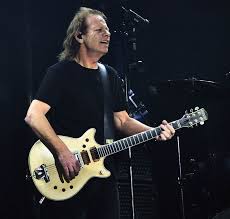 But George had urgent family issues to deal with, his father William had passed away in 1985 and three years later his mother Margaret died in 1988, his mentor and confidante Ted Albert also passed away in November 1990. George departed Dublin, Brian Johnson was mostly a no – show as he was mired in a messy divorce and did not contribute to songwriting on the album; Angus and Malcolm would write all the songs.

The recording sessions were relocated to the Little Mountain Studios, Vancouver (Canada) with the celebrated producer Bruce Fairbairn (above) (Bon Jovi, Aerosmith, INXS, Kiss) whose family had emigrated from Scotland to Canada. Since Fairbairn was originally a Scot, the Young brothers quickly warmed to his personality and recording style and they also enjoyed working with his sound engineer Mike Fraser, who would work on subsequent AC/DC albums.

Fairbairn had reputedly said to Angus “I want you to sound like AC/DC when you were seventeen”, and Razor’s Edge would see the band return to its raunchy, riffing, blistering, carnal rock of the early 80’s, and Thunderstruck would spearhead the rapid ascent of the album up the charts. The lyrics to Thunderstruck are simple, even by AC/DC’s standards, using the words “thunder” or “thunderstruck”, no less than 39 times, and sticking very closely to the repetitive rock riffing for which the band had become famous.

There was also a hefty side serve of sexism, misogyny, and carnality in amongst the single and doubles entendre, to reinforce the message that this song was about getting laid –“We met some girls/Some dancers who gave us a good time/Broke all the rules/Played all the fools…” “I was shaking at the knees/Could I come again please/Yeah them ladies were too kind”.

The lyrics may have been juvenile, even grubby, but the record really powered along like a good turbo-charged rocker. Angus has revealed on the album’s liner notes that he came up with the riff by alternating fretted notes with playing open strings and Malcolm recalled that he had a good rhythm idea that would that would sit well in the back of that riff. Despite their differences and Malcolm’s personal issues, the chemistry between the brothers and the passion that they shared for their music and their band had never waned. Chris Slade (drums) and Cliff Williams (bass) laid down a solid rhythm bedrock over which Stevie played rhythm guitar and Angus delivered the pyrotechnics.

The album restored the band’s fortunes and flagged a return to their uncompromising hard rock odyssey throughout the world, it charted top five in US, UK, NZ, Netherlands, Ireland, Finland, Belgium and #8 locally, selling 8 million copies globally, it became the fourth biggest album by the band after Back in Black, Highway to Hell and Dirty Deeds. The song has become the sporting crowd chant of choice and arena anthem for international football, rugby, ice hockey, cricket, gridiron, baseball, and basketball teams and notched up one of the highest licensing fees for a song’s inclusion in a movie when the producers of Varsity Blues paid $500,000 for the privilege.

The album Razor’s Edge is also notable for the biting, bluesy, single entendre of Fire Your Guns, the sleazily addictive Moneytalks which remains the band’s highest -charting US single at #23 ( Jan ’91), and the inclusion of the humorous ditty, a Mistress for Christmas, inspired by POTUS-in – waiting – Donald Trump, who was then squiring Marla Marples around behind his wife Ivana’s back.

One of the group’s most influential supporters, Ted Albert, passed away a month after Thunderstruck charted in Australia, he had been a seminal force in Australian popular music for over 25 years and to AC/DC and Vanda and Young it was like losing a member of their family.

Following the hugely successful Razor’s Edge Tour of the World, which included a concert in Moscow in front of over 500,000 people, the band started work on the Ballbreaker album with American producer Rick Rubin (below), Bruce Fairbairn was unavailable as he was working on a Van Halen album at the time.

Chris Slade exited the drumkit in the usual way, being told that Phil Rudd was back in the fold, and that a decision would be made about his future “in due course”, ultimately several months later, he resigned in disgust, feeling thoroughly white-anted by the brothers. The project made a false start in New York where sound quality could not be achieved, and ultimately settled on Ocean Way studios, Los Angeles, Rubin’s preferred location. Rubin and the Youngs’ did not hit it off, there had been a dispute about the studio location, Rubin was also criticized for being absent from sessions whilst he was simultaneously working on a Red Hot Chili Peppers album, Angus called Rubin “Rasputin” behind his back.

Ballbreaker was a disappointment, despite hitting #2 in Australia, #6 in UK and #4 in the US, its global sales peaked at 2.5 million and the only single to chart was Hard as a Rock – #33 UK and #18 locally, its staccato riff was catchy but the lyrics were juvenile and trite “Her hot potatoes, will elevate ya…” as was the title track whose lyrics were predictably filthy “She threw me on the bed, her hand went for my throat/ As I began to choke: “Honey shoot your load!”. Burnin’ Alive was inspired by the Branch Davidian cult siege in Waco, Texas but the album was mostly “filler not killer” tracks . 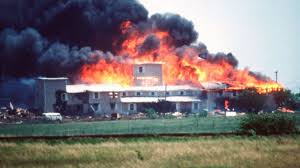 Given the relative failure of the album and the negativity around the appointment of Rubin, who had been chosen by Angus, the brothers resorted to their now familiar strategy of sacking their manager Stewart Young. 1991 began badly for the band when three fans were killed in a mosh pit crush at an AC/DC concert at the Salt Palace Accord Arena in Salt Lake City Utah, on January 18th. 1991, lawsuits were filed by the families of the deceased, and an out-of-court settlement was finalized in late 1992.