They were also the ultimate media cross-fertilization group, segueing to the music industry on the strength of their good looks and pre-Chantoozies public exposure, with no less than five of the band members having already appeared in various television series – all the females Fowler, von Bibra, Goldsmith and La Bozzetta as well as Reyne had variously appeared in – Sons and Daughters, Neighbours, All Saints, Big Sky, The Henderson Kids, The Young Doctors, Starting Out, Prisoner and Special Squad.

After a one-off gig to celebrate Tottie Goldsmith’s 25th birthday the girls decided to go professional, they signed to Mushroom Records and released their eponymous debut album in 1988, the first single lifted from it was a cover of Redbone’s Witch Queen of New Orleans, (below) a #21 hit for the native American swamp rock quartet from Los Angeles in 1972, written by the brothers Lolly and Pat Vegas. 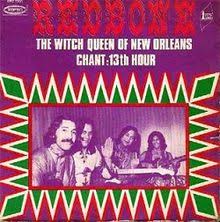 The Chantoozies version was fairly typical glossy 80’s synth-pop Bananarama-esque and lacked the bluesy bayou menace of the original which was a celebration of the voodoo traditions of New Orleans. The lyrics reference Zombies, Cajuns, black cats and Marie Laveau, the actual Witch Queen of New Orleans. It’s worth noting that the Chantoozies version of the song was distanced from the original in the way they dropped that part of the title which referred to the New Orleans provenance of the witch, and the production of the Chantoozies record is reflective of the early work of Swiss synth-pop-electro duo Yello, who had a #8 hit in Australia with their 1988 single Oh Yeah.

The producer at the Platinum Studios (Melb) was Brit David Courtney who had previously worked with Adam Faith, Leo Sayer, Roger Daltry, Gene Pitney and Eric Clapton.  The promo video is filmed in a hilltop “Montsalvat”-style chalet with David Reyne driving up in a red Mercedes convertible sports car, to find the other band members variously draped over the furniture or lurking in the interiors of the house. All four women share the vocals and the most menacing thing about the video was the black cat who hissed at the end. The song charted #4 nationally and the next time they would reach the top ten would be with an original composition by Brett Goldsmith and Eve von Bibra – Wanna Be Up in 1988.

Wanna Be Up is another bouncy, synth-pop song with Ali Fowler very much front and centre as the lead vocalist, written from the female perspective it details the advice one girl gives to another about a man with whom she is infatuated, another performer perhaps, who sings like “Mel Torme” “Did he work you overtime/ Did you want to run and hide/ Did you turn your face and cry/ Like I knew you would.” It was the third single lifted from their debut album and it charted #8 and the album climbed into the top ten in September 1988. The group took three more songs onto the charts  Kiss “N” Tell (#19 in ’88), Come Back to Me (#97 in ’89), and a cover of the Stephen Stills hit Love the One Your With (#20 in’91), and still appear on the national heritage/nostalgia concert circuit.