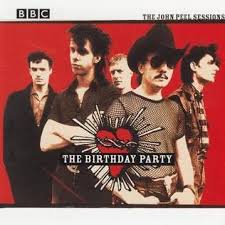 The Boys Next Door debut album Door Door had flopped, and Mushroom Records lost interest in the group, they then hooked up with Keith Glass and his Missing Link label. The EP Hee Haw continued to chart new ground for the band as a reaction against conventional rock/pop music, with Cave’s abstract, neo-absurdist lyrics, and improvised musical embellishments, often pulling in the opposite direction to the songs written by Howard S. Roland. 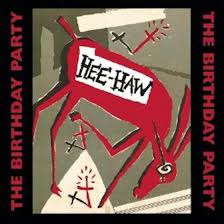 The band became a minor local act with a small  but loyal following, however their generally obstreperous attitude, and drug and alcohol abuse, upset venue promoters, the rock press/media, and fellow performers when they failed to honour gig commitments, they were banned from certain venues, including the popular Bombay Club in Melbourne. Cave was arrested several times for drunkenness, driving without a licence, and colliding with a police car, so the time was right to relocate to England, they changed their name to the Birthday Party, and arrived in London in February 1980.

The band were totally unprepared to make a credible assault on the English market, they had no marketing or management support, Glass (above) had remained in Australia and was not represented overseas, they were broke and living in a filthy squat in Maida Vale, the weather was bleak, they found England a class-ridden sordid place, and the local music scene all seemed to be about cute pop from bands like Echo and the Bunnymen and The Teardrop Explodes. 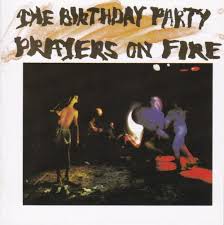 They would play a total of eight gigs in eight months in England and return to Melbourne in November of 1980, where they released their debut self-titled album which failed to chart, their second album Prayers on Fire, released in 1981 was recorded at Armstrong Studios and Richmond Recorders in Melbourne, and it too failed to chart. But there were signs that Cave’s dark theatrical persona was emerging, and this developed further on their third album Junkyard (1982), on which the tracks were generally distorted, abrasive, vicious, and scratchy, the band members and their producer Tony Cohen often passed out on drugs, the lead single Big Jesus Trashcan alluded to a grotesque vision of Elvis Presley as the quintessence of rock and roll music “Wears  a suit of gold (got greasy hair), but god gave me sex appeal”. 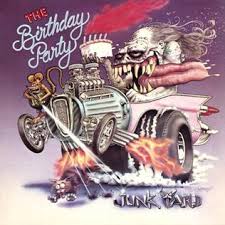 The album cover was a grotesque creature created by custom car manufacturer Ed “Big Daddy” Roth, which depicted a mother’s worry, leather-capped deformity, squatting at the wheel of an elongated, flame-belching hot rod, reaching with a taloned claw for a dice-shaped gear shift, the anarchic energy and humour of the artwork matched the discordance, ferocity and surrealism of the music inside. The Junkyard recording sessions at Armstrong’s were notable too for the drug-fuelled antics of the band, where they graffitied the toilet walls with blood from their syringes, and dismantled part of the plumbing system trying to retrieve a lost syringe – the cleaners went on strike for 2 weeks, and they were banned from recording at Armstrong’s thereafter. But Cave was perfecting his Southern Gothic style that would become his signature, imbued with an overheated religious fervour that would in the future lead his characters down some dark, violent and murderous paths.

The band returned to England in 1982, Pew joined them several month later after he had completed a prison sentence for theft, the band was getting regular work around London and on the Continent, but by 1983 the Birthday Party had broken up and original drummer Phil Calvert moved onto the Psychedelic Furs. The first line-up of the Bad Seeds was formed comprising Cave, Harvey, Blixa Bargeld (guitar), Barry Adamson (bass), and Thomas Wydler (drums) (above), Adamson would be replaced by Martyn Casey and Conway Savage recruited on keyboards, this became the relatively stable six-piece Bad Seeds line-up throughout the 1990’s, Roland S. Howard left the band in 1985 and original bassist Tracy Pew sadly passed away in 1986. 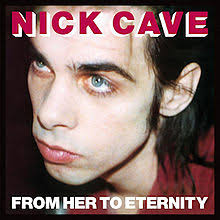 The band would soon be based in Berlin, where they felt there was a more supportive creative environment than London, their debut album From Her to Eternity was recorded at Trident and Garden studios in London and produced by Flood (Mark Ellis), here they moved further away from their punk roots, bringing in an atmospheric sense of musical experimentation that paved the way for the future use of lush orchestration, while still remaining faithful to their darker blues roots.

It’s follow-up, 1985’s The First Born Is Dead, recorded at Hansa studios in Berlin, declared its intentions with the opening crack of thunder and a downpour of biblically epic proportions that leads the listener into Tupelo. A song inspired by John Lee Hooker’s song of the same name; which in turn inspired Cave who felt that the destructive storm was a direct result of the birth of Elvis, and further claimed that not even Elvis’s identical twin brother, Jesse Garon Presley, stillborn 35 minutes prior to Elvis, was able to survive the King’s arrival. The moody obsessions of rural blues – trains, floods, imprisonment, sin, fear, death, and retribution – seemed made to order for Cave, and he would channel the sounds and emotions of American roots music on many albums in the future, and as he tapped into their gloomy iconography he gradually substituted the dissonance and sonic assault of the Birthday Party with a more subtle, balanced, and resonant  sound.

Quickly they followed up with Kicking Against The Pricks (1986), an album of covers featuring blues classics from Leadbelly and John Lee Hooker, mixed up with country (Jimmy Webb’s By The Time I Get To Phoenix, Johnny Cash’s The Singer), epic pop (Gene Pitney’s Something’s Gotten Hold Of My Heart), classic rock’ n ’roll (a creepy take on Jimi Hendrix’s Hey Joe) and stoned east-coast art-rock (a punky version of The Velvet Underground’s All Tomorrow’s Parties), and not only demonstrated the vast range of styles they could take apart and re-construct in their own image, but also deftly ensured they’d never run the risk of being pigeonholed again.

After years of swagger, there’s a sense of pathos running through 1986’s Your Funeral, My Trial, and it’s difficult not to attribute it at least in part to the heroin addiction Cave was plagued by at the time it was made. Even at its most theatrical, as on the vivid tale of a missing circus performer on The Carny, it often feels more like a novel set to music than a traditional rock album. It’s also more collaborative, its centrepiece – the beautifully melancholy Stranger Than Kindness – written by Blixa Bargeld and Cave’s then-partner Anita Lane. They had been together since 1977, and were about to end that relationship, the lyrics are opaque, but seem to explore the reasons for the break-up with Cave, drug abuse, infidelity, and the frayed bonds of the personal and professional lives that they had shared.