Arena relocated to Los Angeles in 1996 to record her third solo album, In Deep, which became her first #1 album in Australia, hard on the heels of 1994’s Don’t Ask which had charted #2, there were no less than three versions of In Deep developed by Sony to cater for the Australian, American and Continental markets. For the local version Tina co-wrote eleven of the twelve tracks, her fellow writers included Mick Jones (ex-Foreigner bandmember/songwriter/producer), Christopher Ward, Dean McTaggart, and regular members of her team from previous recording sessions in LA, including songwriter/producer David Tyson, and the songwriting duo Steve Werfel and Pam Reswick (below). 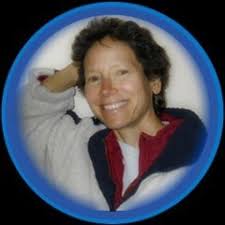 The album was recorded predominantly live in the studio in attempt to capture the warmth and intensity of Tina’s stage performance persona, Tyson produced four tracks and Jones the rest, the album was strongly supported by Sony and its combination of contemporary pop/rock, dance and soul  songs imbued with the passionate commitment that Arena brought to the sessions, seemed to bode well for US success this time around. 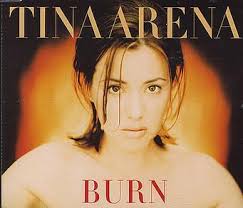 The lead single would be Burn, an Arena/Werfel/Reswick composition that aimed to replicate the success of Chains, the slow-burning verses rise to a crescendo chorus as orchestration swells and Tina checklists various vocations in life – soldier, doctor, actor, poet, diver, climber, gambler, angel, sinner, etc  – but for her whoever this person may be, they have “to burn”. Lyrically it was enigmatic and rather trite, lacking the gravitas and drama of Chains, and musically overly formulaic. No doubt Tina was again a vocal force of nature here, but the song failed to successfully channel the emotional depths and drama of Chains, nor the mood that that would work so well for Natalie Imbruglia with Torn later in 1997. It was a local hit at #4, and charted in the UK #34 and in NZ #36, Spanish and Italian versions were also released, under the title Ti Voglio Qui,  and charted quite well, the song was also successfully covered by US artist JoDee Messina in 2001 for a #2 US Country hit.

The promo video was partly shot in the Richmond Public Pool (Melb,) and directed by local Pierre Baroni, Tina appears suitably wet and alluring in the pool, semi-submerged, as the water turns to the colour of fire as she sings the chorus, pool shots were also intercut with images of people in different occupations, it was disappointing. The US version of In Deep was produced by Jim Steinman whose reputation for inflated, gaudy and overblown albums was well known, Sony also seemed to be trying to market Arena as the next Celine Dion or Mariah Carey, as they inserted several different tracks written by Dion collaborators James Horner and Will Jennings into the US version of the album, as well as duet with Marc Anthony, I Want To Spend My Lifetime Loving You, which ended up on the soundtrack of the movie The Mask of Zorro, but it was pretty lame, and failed to chart outside of Europe. 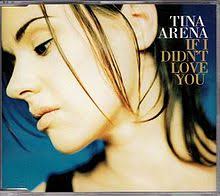 The second single off the album was If I Didn’t Love You, and it reflected the confused feelings that Tina was having in her private life as her marriage to Ralph Carr was falling apart, “If I didn’t love you baby/ As much as I do/ I’d just walk out the door/ I couldn’t take it anymore/ I wouldn’t put up with what you put me through/ If I didn’t love you” … Arena and Carr would divorce two years later, and the song was a minor hit in Australia at #39.

The third single off the album was the bouncy pop of Now I Can Dance, a kind of love letter to her family back in Australia, it was also the title of her memoirs published in 2013. Vocally her style is relaxed, playful, coquettish, and sexy, the video depicts Tina as a talent scout checking out a procession of male and female eye candy models who appear before her camera. While we are not sure what it is Tina is actually casting for, the appearance of flame-haired Spanish American singer/actor/guitarist Charo, who was the ubiquitous “cuchi-cuchi girl” on US television shows throughout the 60’s and 70’s, was a zany highlight; the song was a #17 hit locally, #6 in Belgium and #31 in Switzerland.

The album In Deep was a success for Tina, the Australian version hit #1 and stayed on the charts for 47 weeks, the French version hit #3 there and the single Aller Plus Haut (To Go Higher) climbed to #2,the biggest hit ever by an Australian in France, globally the album sold in excess of 1.5 million copies, but failed to impact on the US charts. 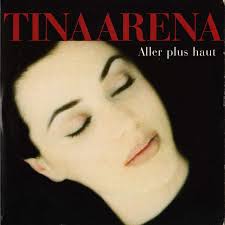 Over the journey Tina has sold over 10 million records, is rated along with John Farnham as one of Australia’s greatest singers, she has won no less than seven ARIA awards, and two World Music awards, has been inducted as a Knight of the French National Order of Merit, is a recipient of an Australian Order of Merit, and was inducted into the ARIA Hall of Fame by Kylie Minogue in 2015. She has released nine English language albums, the last being Eleven in 2015, three French language albums, five compilations and four live albums. Arena has sold in excess of 5 million albums in France alone, has played lead roles in such live theatre productions as Cabaret, Chicago, Notre Dame, and Evita, sung duets with Stevie Wonder, Andrea Bocelli (below), Donna Summer and Marc Anthony, and when Cadel Evans became the first Australian to win the Tour De France in 2011, it was Tina Arena, a proud Aussie, who sang Advance Australia Fair on the Champs Elysee, at that historic victory ceremony.