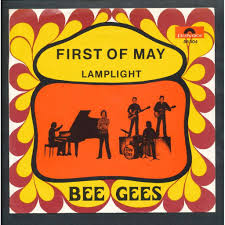 The most famous band of siblings had broken up in 1968, the final straw for Robin had been the decision by Barry, supported by their manager Robert Stigwood, to make First of May, a Barry Gibb solo vocal, the first single off the album Odessa, over the competing claims of Robin’s Lamplight, which became the B-side. Odessa was an album which reflected the fracturing of the band, there was a general lack of artistic and creative direction and cohesion right from the conceptual stage of development, with the mythical loss of the HMS Veronica in 1899 supposed to be the inspiration for their magnum opus, but somewhere along the way this vision, like the ship, sank without a trace.

Robert Stigwood must take much of the blame for the failure of Odessa, he was obsessed with the idea of the brothers replicating the double album indulgence, complexity, and thematic narratives of other artists – the Beatles White album and Sgt. Pepper’s Lonely- Hearts Club Band, Dylan’s Blonde on Blonde, Cream’s Wheels on Fire, Jimi Hendrix’s Electric Ladyland, and the Who’s Tommy. But the Bee Gees were not only unable to create such a concept album, they were exhausted, artificially stimulated, fighting amongst themselves, and lacking clear guidance and direction from their manager Stigwood, who was massively distracted at the time, bringing his debut production of Hair to the public.

Upon the release of Odessa, lead guitarist Vince Melouney (centre above) had left the band, soon after drummer Colin Peterson (far right above) would be sacked, the brothers were exhausted and fractious, the album lacked their usual sure-footed verve and spontaneity. It was a double album with an opulent red flock cover and gold lettering, intricate string, and orchestral arrangements, dense lyrics and opaque metaphors, there wasn’t an obvious single, it was all dressed up with nowhere to go. That said, the lead single became First Of May, it was not a traditional 60s pop song, rather a stately, orchestral track, with one of the more unusual “cold” endings, when all the instrumentation ceases, to leave Barry alone singing, “don’t ask me why, but time has passed us by, someone else moved in from far away,’ his voice is fading down as he sings, which tends to draw the listener into the record, as his vocals imbue the final lyric line with an aura of melancholy, building on what was already a wistful and nostalgic song.

First of May was released in March 1969, Barry’s solo vocals were beautiful, the song became a seasonal Christmas favourite because of the lyrics “when we were small and Christmas trees were tall…” although the song has been apocryphally attributed to Barry’s Pyrenian mountain dog, Barnaby. It was a moderate hit in Australia (#13) and the US (#37) and did better in the UK at #6, the album Odessa only performed moderately but has been re-evaluated more favourably in recent years.

Robin collapsed with nervous exhaustion following his split from the band, he successfully resisted an attempt by his parents Barbara and Hugh to make him a ward of the court due to his perceived addiction to amphetamines, and he recovered to record his first solo album Robin’s Reign. The title was clearly a swipe at big brother Barry who he blamed for marginalizing and under-valuing his contribution to the Bee Gees work, this was Robin’s declaration of independence, and his solo vocal release, Saved By The Bell, was a top ten hit in Australia and the UK. In 1971 the brothers would re-form and subsequently re-affirm that the sum of their parts was far greater than the individual contributions of each brother outside the family circle.