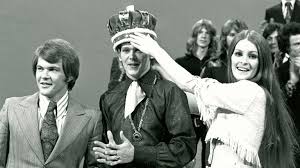 Johnny Farnham was King of Pop for five consecutive years between 1969-73 (pictured above with Alison Durbin and Ross D. Wylie), his manager Daryl “Sadie” Sambell exercised a Svengali-like control over his career, and was convinced that if Johnny got married, he would lose his number one meal ticket. Farnham had his fair share of flings with some prominent women including singers  Olivia Newton-John, and April Byron (below), and one of Reg Ansett’s daughters in the years preceding the announcement that he was to marry, Sambell was livid and publicly denied it.

When it was further revealed that his fiancée was Jillian Billman, a dancer with whom Johnny had worked on the stage musical Charlie Girl, and that she and her elder sister Judy were to be married in joint nuptials on March 29th1973, Sambell dismissed this as an unfounded rumor. 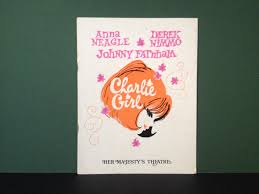 It was only after Ian Meldrum produced a copy of his wedding invitation on the front page of Go-Set magazine that Sambell accepted that his biggest star was to tie the knot.

Sambell was so obsessive about preserving the image of Farnham that he cancelled the joint nuptials and refused to allow Billman’s sister to get married with Jillian, and even after he installed himself as Johnny’s best man, his reception speech included the following comment “John and Jill are off on their honeymoon, I wish them the best of luck, and while they are away I’m going to work on their divorce”.

By the time Johnny Farnham went into the recording studio with producer Peter Dawkins to record his fourth album, Hits, Magic, and Rock and Roll he had already notched up eight top ten hits including several #1 charters in Sadie and Raindrops Keep Falling on My Head. The album was a typical mix of original songs and cover versions, Rock Me had been released by Farnham in September 1972, several months before the original album version by teenage heartthrob David Cassidy (below) had been released by him as a single, Farnham’s version charted at #6 and Cassidy was left in his wake at #46. 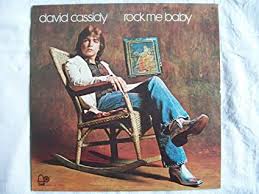 Rock Me was a competent pop song, the opening guitar riff is arresting, bass and drums carry the song forward, several tempo changes throughout provided added interest and piano and backing singers swell in support of Farnhams’s vocals at the outro. The song was co-written by Johnny Cymbal who had previous solo success with Mr. Bass Man in ’63 (US#16) and pseudonymously as Derek with Cinnamon in ’68 (US #11)

Don’t You Know Its Magic was a superior recording, very typical of the piano-based country-tinged songs so characteristic of Brian Cadd, the orchestration throughout is impressive, the piano intro and steel guitar riffs that follow are well-complemented by Farnham’s vocals. It was a simple rites-of-passage song about dreaming, growing up, being positive and believing that life can be magical if you want it badly enough.

But this was not a song that emerged after a relaxed and indulgent creative process, Cadd had been summoned by Gavan Disney, manager of singer Robin Jolly, to write a song that day, to compete for entry into the Yamaha Song Contest, with a possible  future performance at the Yamaha International Song Contest in Tokyo later that year. Cadd began to work at his piano, recycling half-completed tunes, rummaging through books of random song titles and half-written lyrics, but by midday he was about give up, when he took a phone call from Annie Lindfield, Rod Muir’s secretary, who ran both radio stations 2SM and 3XY. Annie was in full praise of a concert she had recently attended “he was magic, darling, the band were magic and the whole night was, well, magic…” (From This Side of Things – Brian Cadd 2010). The current buzzword “magic” resonated with Cadd, he now had a title and a lyrical thread for his new song, an hour later he had completed the melody and lyrics, a two-track recording was duly committed to tape, and express delivered to Yamaha Music. The national trials were held in Sydney at the Footbridge Theatre on Broadway, and the song, now known as  Don’t You Know It’s Magic, was performed by a vocal group, and it won, and so became the Australian entrant in the Yamaha International Song Contest to be held in the Budokan Theatre in Tokyo.(below)

Cadd knew that the song was challenging to perform because it spanned several octaves, and would require a vocalist with a range capable of hitting both the high and low notes, Johnny Farnham was the obvious choice, and Cadd and Farnham worked together in preparation for the big event. Farnham delivered an electric performance and won the crowd over with his voice and stage presence, the song was awarded the Most Outstanding Prize, which was impressive, given that they were up against a then-unknown quartet from Sweden, known as ABBA. Below left to right Farnham, Cadd, and legendary local producer Bill Armstrong, in 1972.

This song was a watershed moment for Farnham, it charted at #12 nationally, and in 1974 Johnny would become the first compere of the ABC’s new pop show Countdown and remain so until after the first colour edition in early 1975, when Ian Meldrum began his reign in the emcee’s chair. But in the period 1973 – 1985 Farnham would take only two records into the top ten, Everything is Out of Season (#9 in “73) and Help (#8 in ’80),  before his re-emergence as the country’s pre-eminent adult contemporary performer, when Whispering Jack and the anthemic single You’re The Voice, took him back to the top of the charts in late 1986.

Sambell was Farnham’s manager for over nine years until they announced their split early in 1976, he was controlling and dogmatic, but very loyal to his young star and took every opportunity to promote Farnham’s career, but not always in those directions that would ensure his longevity in the industry. He relocated to work in New Zealand for the next 12 years ultimately returning to Australia to manage medical supplies company, Polyworks, on the Gold Coast, and sadly passed away in 2001, aged 56.