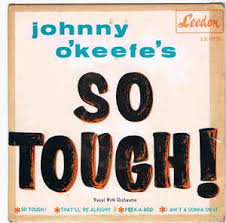 O’Keefe followed up The Wild One with a cover of the Lloyd Price hit Lawdy Miss Clawdy backed with  Over the Mountain, a cover of a Rex Garvin ballad which had been recorded by Johnnie and Joe in the US in 1957, it was this song which charted for Johnny at #24 in May 1958  He followed up with So Tough, another cover version, this time of a hit by the US group the Casuals in 1957, written by the Casuals front-man Gary Mears, it hit #16 in July for JOK locally.

It was an under-rated song when first issued, O’Keefe’s vocals are convincing, you become engaged with the song right from O’Keefe’s opening vocal melisma “Well she’s so to-ou-Ou-ou-Ou-ou-Ou-ou-Ou-ou-Ou-ough …” and thereafter the Delltones (pictured below with Johnny) and Dee Jays swing in behind with tight rhythm and harmony vocal support.The film clip captures JO’K performing the song while hosting the legendary Six O’Clock Rock TV show.

Percussive handclaps, a resonant slap bass and terrific saxophone flourishes from Johnny Greenan and Dave Owen produced a fine record. The Wild One would return to this song fourteen years later in 1972 with his barnstorming appearance at the Sunbury Rock Festival (crowd scene below), when the timeless So Tough would chart again, and hit #7 locally and stay on the charts for 24 weeks, for Johnny’s biggest hit of the 1970’s.

In February 1959 J’O’K and the Dee Jays became the resident act on Australia’s first national television rock program- the ABC’s Six O’Clock Rock. After 6 episodes O’Keefe replaced the original compere, American female presenter Ricki Merriman, and created the now legendary show intro – chiming bells, exploding rockets, the Paddington Town Hall clock striking the hour and the Wild One’s exuberant vocals. Peter Page had written the lyrics and Johnny O’Keefe artfully knocked off Elvis Presley’s All Shook Up, to create the song, but it became one of the most recognizable theme songs in local TV history. The show itself was a powerhouse hit, a million viewers, or one-tenth of the entire population at the time, would tune in at 6.00 o’clock, every Saturday night.

O’Keefe may have seemed an odd choice for the conservative national broadcasting service to host their new show, he did not fit the clean cut and urbane Dick Clark or Brian Henderson image. But the BBC had done something similar when they chose DJ Pete Murray (below) to co-host their new popular music program 6.05 Special in 1957, following the abolition of what was known in the UK as the Toddlers Truce, where British TV channels had previously stopped transmitting between 5.00 pm – 6.00 pm to allow parents time to put their children to bed!

A Brit named David Porter who had produced the 6.05 Special had relocated to the ABC and was asked to create an antipodean version of the same show right here, the lure of the teenage market was irresistable, Col Joye was invited to compere the show but he had signed with Channel 9’s rival Bandstand, the ABC wanted the Dee Jays to be the house band, but not necessarily with Johnny O’Keefe, to which Johnny replied “You want the band? Sure. But only if I get to appear too,” and they agreed.  Pete Murray’s opening to each show was “time to jive on the old six five” as the house band revved up in the background, while Johnny’s intro was “well come on everybody its’s six o’clock, come on everybody it’s time to rock”, as two jiving dancers, Lee Neilson and Milton Mitchell filled the screen, while the simple graphics which spelled out the show’s title, were superimposed on the screen.

Six O’Clock Rock was live, raw, unpolished entertainment that attracted viewers of all ages, but it wasn’t the first local TV show pitched at teenagers –Ernie Sigley’s (above) Teenage Mailbag, The Hit Parade, Juke Box Saturday Night, TV Disc Jockey, Ardath Hit Parade, Club Seven, Cool Cats Show, Bert Newton’s The Hi-Fi Club, Teen Time had all come and gone, usually after only one season, and there would be many imitators in the future – Saturday Date, Teen Scene, The Go!! Show, Kommotion, Club Seventeen, It’s All Happening, It’s A Gas, Uptight, GTK, Happening ‘70, Sounds, Flashez – but the original Six O’Clock Rock and Bandstand were to their audiences at the time what Countdown would become twenty years later. 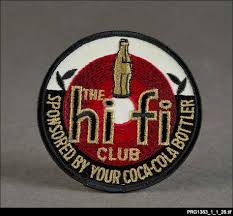 A clip of one of the early shows is a time capsule of the period, a slightly edgy and nervous O’Keefe does his best to appear cool and in control, he had forsaken his lurid suits and split curls for a more streetwise wardrobe of casual shirts, crisply creased trousers, and cardigans, his hair was slicked back, and he appeared to be a natural for this new medium, he also liked to use the current hip terms like “gas’, “cat’ and “session’.(photographed below with Dig Richards and Johnny Devlin).

The sets, lighting, framing, and sound were basic, the budget for wardrobe and makeup virtually non-existent, it was clunky and messy, but it was our clunky local mess, it was Australian, not a New York, Detroit or Memphis accent to be heard, the kids jived on set and self-consciously watched the cameras as they roamed the dancefloor, Johnny was their idol and he knew it. In the clip featured here the guest singers were inexperienced, and occasionally sang and played out of tune – Jimmy Griffiths accompanied himself on guitar and sang the Freddy Cannon hit Tallahassie Lassie, but did not get invited back onto the show, the Sapphires vocal group sang a JO’K song Why Do They Doubt Our Love, but the doo wop harmonies were average so it just meandered along, O’Keefe gave a restrained performance of the Presley hit Too Much, the inhouse jazz band the Earl Butler group performed the instrumental Dancing On The Ceiling, and ageing US singer Louis Prima featured in a clip (JOK promised a duet with Prima and Keeley Smith but Keeley never appeared) performing Up A Lazy River – rock, pop, jazz, Las Vegas lounge lizard, the show was pitching to a broad market, but it succeeded.

The original signature tune for Six O’Clock Rock with the bells and explosions of the original was replaced two years later by yet another Johnny O’Keefe composition titled Rock Time, with a propulsive rock beat, infectious handclaps and doo wop backing by the Delltones, and the Dee Jays Greenan and Owens delivering saxophone flourishes, Lou Casch on guitar solo with the Wild One’s reckless vocals up front.