On June 27th.1960, in the early hours of the morning, Johnny O’Keefe was returning to Sydney from a tour of Queensland, when he fell asleep at the wheel of his new cherry-red Plymouth Belvedere, crossed over the centre line and side-swiped a gravel truck at Clybucca, north of Kempsey (NSW).

O’Keefe was thrown out of the vehicle on impact and his fellow passengers, saxophonist John Greenan, who was also thrown from the car, and his wife Jan, were badly injured, Greenan had a broken neck and was admitted to Macleay Hospital, Jan was found wedged under the dashboard at the scene of the accident with severe concussion.

JO’K was also rushed to Macleay Hospital and then airlifted to Sydney where he required 90 stitches to his face and body as well as the replacement of teeth and reconstructive surgery on his gums and mouth; incredibly he was fronting Six O’Clock Rock 6 weeks later, it would be six months before John Greenan would recover and be able to resume performing.

Johnny asked his wife Marianne to retrieve a bag of marijuana that Lee Gordon had sent to him and was still inside the boot of his car, now sitting in the local police lock-up (above), which she refused to do, but Lonnie Lee (above), who was about 30 minutes behind O’Keefe in another car, arrived at the scene of the accident before the police and scooped up a bag of marijuana that had also been secreted in one of the hubcaps.

In 1960 road trauma amongst rock and rollers was not uncommon, in that year both Johnny Horton and Eddie Cochrane (above) would die in car crashes, the latter met his fate on April 16th near Chippenham (UK) and the first policeman to attend the scene was young cadet officer David Harman (below), who would later become famous as the singer Dave Dee.

Locally Dig Richards sustained serious injuries in a crash on the Harbour Bridge, Lonnie Lee drove into a telegraph pole and took months to recuperate, in 1959 Barry Stanton was almost decapitated when he drove under a truck, and in 1962 Noel Weiderberg, the original lead singer of the Delltones died when he rolled his car in the Sydney suburb of Brighton-Le-Sands.

Ready for You was a national #10 hit for JO’K in November 1960, featuring driving saxophone by Dave Owens and Johnny Greenan, solid bass and drums and accompaniment from the syncopated backing vocals of the Delltones.

O’Keefe was passing through a very dark period in his life, the failure of his American campaign had sapped his confidence, a near-fatal car accident had disfigured not only his face but also his psyche, his paternal grandparents had both died within days of each other, and his natural ebullience and larrikin spirit seemed to have been replaced by an inner sadness, a darker sense of his own mortality, and despite outward appearances, he was broke.

Ever the optimist O’Keefe decided to turn up on Liberty Records doorstep in Los Angeles and resume his career there, he departed Australia on January 15 1961, but Liberty had already severed their relationship with him in March 1960 and turned him away. He then flew to New York and visited the offices of Aaron Schroeder Music Publishing, in the famous Brill Building (below), where he fortuitously met African – American songwriter Alicia Evelyn (above), who played her song I’m Counting On You on piano to him, and worked through a possible arrangement with Johnny. 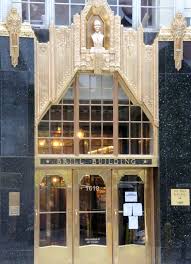 A sleep-deprived and over-medicated O’Keefe found that he was snowed-in and could not return to Australia but flights to London were open, he had a letter of introduction to senior executives at the BBC from Charles Moses, then head of the ABC, and decided to cross the ditch, chance his luck, and pitch himself and Six O’Clock Rock to the Brits. Arriving in London on March 5 1961, he promptly booked himself into the ritzy Dorchester Hotel, but he was seriously disoriented, convinced that he had actually died in the car crash near Kempsey, and was inhabiting some twilight zone of afterlife, alcohol didn’t help to resolve his confusion either. He collapsed in the foyer of the Dorchester, raving about being dead and claiming to be Jesus Christ, police transferred him to the Tooting Bec mental hospital, where he remained heavily sedated for the next three days, until he escaped, disguised as a doctor! Johnny returned to Australia and was reunited with Marianne and his two children, John and Victoria, but professionally his life was unraveling, plans for overseas success in the Sates and the UK had come to nothing, the ABC decided to cancel Six O’Clock Rock after Johnny demanded a bigger budget, the last episode aired in 1962, he was now unemployed.

In more enlightened times O’Keefe’s mental condition, and what was described then as a nervous breakdown, would have been diagnosed as post-traumatic stress disorder and treated accordingly. It was also generally agreed in retrospect, that John was bipolar, and had been all his life, the combination of these factors, if properly diagnosed, could have enabled health professionals to chart a course of treatment and therapy that would have enabled him to lead a reasonably normal life in the future, but this was not to be. Ready For You may have restored Johnny’s chart fortunes, but in reality he was not ready for life, which would make his success over the next five year even more incredible.