Move Baby Move backed with You’ll Never Cherish a Love So True was a double A-side hit for O’Keefe, Move Baby Move, had formerly been recorded by others as Move & Groove (Frankie Brunson) and the original version by Gil Hamilton (US) was also entitled Move & Groove when released in 1962. Move Baby Move represents a significant progression in the quality of O’Keefe’s records, on this song the orchestration and particularly the use of trumpets and other brass was very effective, and the vocal backing is peerless.

Co-composer Wes Farrell was a prolific songwriter, his hits included – Come A Little Bit Closer (Jay and the Americans), Come on Down to My Boat (Every Mothers Son), Hang on Sloopy (McCoys), Boys (Shirelles and the Beatles), and Baby Can I Take You Home (Animals).

On the flipside was You’ll Never Cherish A Love So True, an early composition by Berry Gordy Jnr (above). the founder of Motown Records – “Hitsville USA” in Detroit in the 1960’s where he re-defined the status of black contemporary music.

This song was originally recorded by the Vells in 1962, who would later become better known as Martha and the Vandellas. Prior to having their first big hit with Heatwave in 1963 the Vandellas backed Marvin Gaye on several records including Stubborn Kind of Fellow (1962).

This was the fourth #1 hit for JO’K and the fourth highest-selling record of the year, his other chart entries in 1963 were Shake Baby, Shake (#19) and Twist and Shout (#44).

The original version was a traditional piano-based blues song with slightly different lyrics.

O’Keefe’s version used more complex orchestration with the addition of brass, the lyrics were updated to reflect the rockier treatment but for all that, at its beating heart, this song still shows its New Orleans jazz -joint origins and it charted #8 nationally.

In 1964 O’Keefe’s fortunes were deteriorating, his friend, business partner and promoter Lee Gordon had passed away, his Channel Seven contract had been cancelled, his first marriage was failing after he became violent towards Marianne once to often, he had another nervous breakdown, and there was a generational change taking place in popular music.

In 1964 O’Keefe had a #9 hit with his cover of She Wears My Ring, a US charter for Solomon Burke, composed by the husband-and-wife team of Felice and Boudleaux Bryant, who were the go-to songwriters for many of the early Everly Brothers hits. This song was originally an old Mexican lament about being homesick called La Golondrina (The Swallow) and the Bryants’ changed the title and lyrics to produce this English version for a hit song, Tommy Tycho, leader of the Channel 7 Orchestra developed a great string arrangement for the song, which lifted it up to top ten hit status.

This ballad was Johnny’s last national top 10 entry for eight years until he stormed back into the charts after his dynamic and commanding performance at the Sunbury Rock Festival, with So Tough at #7 in 1972 followed by Mockingbird, a duet with Margaret McLaren that climbed to #8 in 1973. By 1966 O’Keefe was estranged from his wife and they would be divorced in December, the family home at Castlecrag was sold, the Beatles had led the British Invasion of popular music, Johnny couldn’t get work in a club, hotel, restaurant or on television, so he was singing on sideshow alley at the Sydney Royal Easter Show (below). 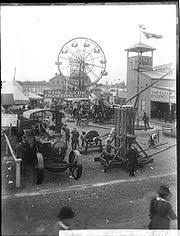 Subsequently he joined the Frank Foster (far left in photo below, which also includes other famous “showies – left to right from Foster are Jack Allan, Bob Morgan, Jim Sharman, and Tom Wittingslow)) showground circuit of entertainers which had included such unremarkable acts as Jolly Nellie the Fat Lady, Chang the Pinhead Chinaman, Samson the Strongman, and of course the obligatory Flea Circus. For Johnny it was a rapid fall from fame and the adulation of his glory days, the work was ill-paid, the lifestyle was crude and nomadic, but his old nemesis Brian Henderson invited Johnny to appear on his show, it would be a tribute to the founding father of Australian rock and roll, and revive his fortunes once again. 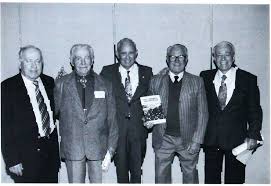 O’Keefe did host one more TV show, in 1967 the fledgling Channel 10 launched the bi-weekly Where the Action Is, with popular songs performed on location in and around Sydney, it ran until mid-1967 but was replaced by Blind Date, Johnny went back on the road, and continued to tour the country for the rest of his working life.