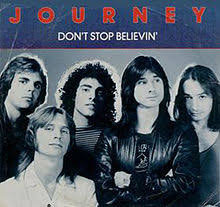 This is a song with a title that carries a strong message for us as we look for a light at the end of the COVID tunnel, a famous song that was first released in 1981, given another boost when it was featured in the stage musical Rock of Ages in 2009, and again boosted when the movie Rock of Ages, starring Tom Cruise, was released in 2012, current sales sit at a healthy 11 million globally. The song has a most unusual structure as the chorus, and the title are not mentioned until the last 50 seconds of the song, being preceded by an instrumental intro, first verse, instrumental break, second verse, pre-chorus, instrumental break, third verse, pre-chorus, instrumental chorus, and then the chorus to the outro. Written by Journey band members Steve Perry, John Cain, and Neal Schon, it was a top 10 hit in the US when first released in 1981, the song starts with Perry singing about a young couple from different backgrounds – “Just a small town girl, livin’ in a lonely world/ She took the midnight train goin’ anywhere/ Just a city boy, born and raised in south Detroit/ He took the midnight train goin’ anywhere…”, but here Perry took liberties with the geography of Detroit, as there is no south Detroit, because if you go down the river from that city, you will end up in Canada, but lyrically it sounded better. Perry has also explained that lyrically the song originated during a series of gigs in Detroit where he found himself in a hotel room, unable to sleep, and gazing out of the window watching people walking out of the dark and into the light, which inspired the term “streetlight people”.

During the 2020 pandemic, some hospitals have used the song as a rallying call for patients recovering from COVID-19 and those treating them, by playing Don’t Stop Believing throughout the building each time a coronavirus patient is discharged.