For What It’s Worth (Stop, Hey What’s That Sound) – Buffalo Springfield

The song was inspired by a lack of social distancing, which police had interpreted as being an anti-war rally in West Hollywood in 1967, in contravention of anti-loitering laws in place there at the time. Three thousand had turned up to jointly protest both the anti-loitering laws and the closure off a nightclub, Pandora’s Box. LAPD turned out in full riot gear and blocked the streets, Stephen Stills witnessed the event, and the cops over-reaction to it, and went back to his home in Topanga Canyon and wrote the song. Stephen Stills said in an interview that the name of the song came about when he presented it to record company executive Ahmet Ertegun (Atlantic Records), with the comment “I have this song here, for what it’s worth, if you want it,” to which Ertegun added in parentheses “Stop, Hey What’s That Sound,” to make it easier to recognise the song. The unique bell or chime-like sound on the guitar was achieved by Neil Young tuning his guitar using the “harmonics” technique.

Buffalo Springfield were a potent mix of talent, testosterone, and artistic temperament, Stephen Stills was the self-appointed leader of the group, but Neil Young and Jim Messina  were also alpha males who vied for domination, Young left the band and was replaced by David Crosby, and it was that formation which opened the Monterey Pop Festival in 1967 with this song (above), that had become their debut hit.

Stills, Crosby, and Young would ultimately form Crosby, Stills, Nash and Young, and it would be Neil Young who would pen the band’s ultimate protest song, Ohio in 1970, following the deaths of four students at Kent State University at the hands of National Guardsmen, whilst attending an antiwar rally there on May 4th.

How an American masterpiece might be transformed by social distancing: 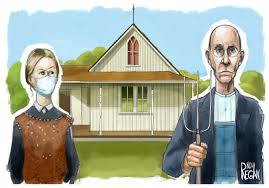