In 1981 Brad Robinson married Kerry Armstrong, but the marriage was short-lived as the aspiring actress, had her heart set on success in the States, and the separation and tyranny of distance ultimately caused the marriage to be dissolved. With Brad’s consent Kerry completed a “green card” marriage of convenience with Alexander Bernstein to ensure she got the visa she needed to stay in America.

In 1982 the band arrived in Hawaii to record their third album Sons of Beaches with expat Aussie producer Mike Chapman of “ChinniChap” fame, who had curated the careers of Suzie Quatro, Sweet, Smokie, Racey and Mudd with his offsider Nick Chinn (below with Chapman on the right), during a period in the UK in the 1970’s when their market dominance  would only be equaled in the 1980’s by Stock, Aitken and Waterman. Chapman was the most experienced producer with whom the band had worked to that time, and had already produced landmark albums for Blondie and The Knack, but Sons of Beaches would not meet the collective expectations of all involved.

The band under Chapman’s guidance tried to transition to a more hard rock sound, less the coastal casualness, drollery and glossy pop of their previous albums, more hairy-chested, full tilt guitar rock, but only one song sounded like it had single potential, and that was drummer Bill McDonough’s Shut Down. The lyrics urge a friend to dispense with a gold-digger – “You’re her ticket to the swinging set/ You’ll make her summer/ You’re her best bet/ Play a part/ Think with your mind and not your heart,”  and ended with the emphatic chant “alimony,” it charted at #17, but no other singles really impressed, however the album was another #1 hit and stayed on top for three weeks.

By this time the band was starting to implode, Simon Binks and Bill McDonough had fallen out and McDonough left the band in 1983, James Reyne took leave of absence to co-star in the Australian television mini-series Return to Eden on the Ten Network, at the time he remarked “It was this ridiculously over-the-top super-soap opera, but it was going to be a top-rating television melodrama”  and no doubt it helped to pave the way for James Reyne to embark on a solo career.

Reyne also began moonlighting with The Party Boys, a casual super group with a changing line up that mostly did covers, and had a #1 hit with the old John Kongos hit He’s Gonna Step On You Again in 1987,when John Swan was front man for the band, and the eclectic line up also included Kevin Borich (ex-Kevin Borich Express), Alan Lancaster (ex-Status Quo), Richard Harvey (ex-Divinyls), John Brewster (Angels), and Paul Christie (ex-Kevin Borich Express) 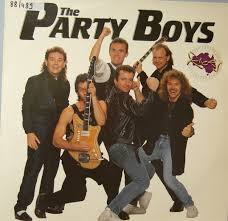