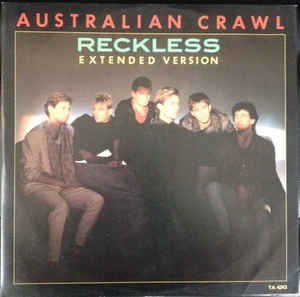 The band reconvened in 1983 to record their four-track EP Semantics, produced by Mark Opitz (below) and released in October , the band were aiming for a more contemporary sound, moving on from their catchy surf rock-infused songs, and nowhere was this more evident than on the stand out single, Reckless.

James Reyne was clearly staking out new territory for his future solo career here, moving on from the upbeat, exultant, signature sun, surf and sardonic lyrics take on life of Australian Crawl. Reckless, was a slice of cleverly crafted pop/rock from a more soulful, contemplative Reyne, which merged brooding synths, gated reverb drum beats and acoustic guitar, in a way that no Crawl song had ever presaged. Its central motif is a resonant snare-drum that pulses like a heartbeat throughout the song, as bass and cello merge in a synth pattern that surprisingly gives way to an affecting acoustic guitar solo. 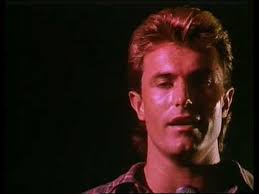 It was the song’s musically sparse metaphorical homage to such historically adventurous and tragic heroes as Scott of the Antarctic and Burke and Wills, all who perished in remote locations, amid casual references to such Australiana as the Manly Ferry, that resonated with fans.

Iconic Australian locales like Circular Quay, and the tragic “dig tree”, are counterpointed with  “Russian subs beneath the Arctic” – a reminder that the nuclear-powered K-27 Soviet era sub, had been deliberately scuttled by Russia in 1983 in the Arctic Ocean, contrary to the policy of the International Atomic Energy Agency at the time.

Reyne had been on the set of the film Return to Eden ( below with Wendy Hughes and Rebecca Gilling)  and during a break in filming he was strumming his guitar and noticed the Manly ferry passing by and the pontoons on which passengers were waiting, the verses literally fell out but it hardly resonated with him at the time, it was something he believed he would finish in the future, he thought it might be a good B-side!

Reyne had however been filming and separated from his girlfriend Kim Ellner,  for almost a year, and consciously or unconsciously the themes of loneliness and abandonment were discernible, the repeated line “she don’t like that kind of behavior” is more revealing about the state of their relationship, Reyne’s philandering was now threatening the relationship so much, that he admonished himself, “Don’t be so reckless”.

Reyne has claimed that the early verses were written very quickly, he demoed an early version of the song to Bob Starkie of Skyhooks (below) at his Middle Park (Melb) studio, Reyne was underwhelmed with his efforts but Starkie was enthusiastic and encouraged James to record it.

APRA acknowledged the simple grace and refinement of Reckless, and it was listed in the best songs of the period 1926-2001, and was the 12th biggest-selling record of the year. There were no Reyne “mondegreens” here although some fans incorrectly translated Russian “sub” to be “sun”.  Reckless (Don’t Be So) was recorded and produced by Mark Opitz at the Rhinoceros Studios (Syd) and AAV Studios (Melb), and as well as being pre-released on the Semantics EP it was also included on the Crawl’s #4 album Phalanx released in December 1983.

The band would issue three more albums. A compilation of greatest hits titled The Crawl File which charted #2 in 1984, their last studio album, Between a Rock  and a Hard Place which climbed to #11 in 1985 and their swansong live album, The Final Wave in 1986 which was a #16 charter. The band were inducted into the ARIA Hall of Fame in 1996 along with Horrie Dargie, James Reyne would go on to an illustrious solo career,and sadly Brad Robinson would succumb to lymphoma in 1996 and and pass away at the age of  37.