While the band’s previous album Place Without A Postcard had done well at home, it failed to find much international support, and all the touring in the world would not keep the Oils afloat much longer. Behind the scenes, tension was building within the band, and within a year, they were back in England – this time, London – with a much younger producer, and an air of desperation. Rob Hirst admitted that at the time he was at his wit’s end and suffering panic attacks “There was huge pressure on the band,” he says. “It was make or break time… We were sick of going overseas and losing money and then coming back to Australia and having to do a long tour just to recoup and go again.” “We had nothing to lose at that point,” agreed Jim Moginie. “There was no sense we were trying to preserve or protect any legacy. It was like we never had any legacy; we almost started with a clean slate and set out to make a record that worked.” 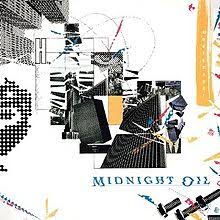 In September 1982, following several less than inspiring warm-up gigs at London’s Zig Zag Club; it seemed the locals were more into the Jam, Clash and Elvis Costello, while the New Musical Express poured the usual amount of scorn reserved for Antipodean bands upon them; they proceeded to the Town House recording studios with Nick Launay (below) to record their fourth album 10,9,8,7,6,5,4,3,2,1 hereafter referred to as 10 to 1, in what was probably a sly dig at the opening voice over to Countdown each week, a show on which they would never appear.

Launay was a young gun producer (Public Image Ltd, Gang of Four, and Nick Cave’s Birthday Party) who was prepared to take risks in the studio, he was not unaware of the band, as his then-girlfriend was an Australian, and a fan of the Oils. But he was also quite opinionated, and early on he encouraged the band to dial back the volume using smaller amps, reduce the distortion and raw noise of their music, minimise overdubbing, and encouraged the band to actively participate in the production process. 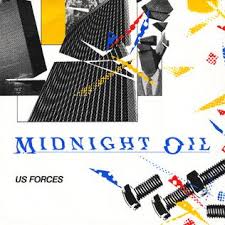 This album would take the Oils out of the pubs and into stadiums via a re-direction into radical post-punk production techniques, songs were cut up, and reassembled later, Hirst’s drums were recorded without cymbals, to be overdubbed later, and two of the album’s biggest-sounding songs, U.S Forces and Read About It, were built on multiple layers of acoustic guitars, with electric guitars used more sparingly, and all to a devastating effect. U.S. Forces featured Hirst playing piano strings with his drumsticks in the chorus, a difficult feat, which Hirst pulled off magnificently.

Read About It, with words and melody by Rob Hirst, and the key guitar riff supplied by Jim Moginie, was assembled by him at his house in Putney, when the band were in the UK. Launay used the studio’s talkback mic to add to the drum sound, in a room that was already famous for its resonant percussion sound, the video was filmed in the Jenolan Caves (NSW) with Garrett wearing his trademark “Read About It” overalls.

Power and the Passion  was recorded in The Town House “Stone Room”, so-called because its floor and one wall was completely constructed of Cotswald stone, which produced a full-bodied resonant drum sound, much-favored by such artists as Phil Collins, who with Roger Padgham had achieved something similar there with the invention of the gated reverb drum sound, on such tracks as In The Air Tonight. Not surprising then that this song became the only Oils record that featured a drum solo by Rob Hirst ( second from right below), and Peter Gifford (extreme right, below) also delivered convincingly for the rhythm section on bass which endowed the song with further depth and resonance.

The use of brass on this song was also particularly effective, local session players Gary Barnacle (saxophone), Peter Thoms (trombone) and Luke Tunney (trumpet) brought special flair to the session and their sustained high-pitched playing in the coda to the song was memorable, the Oils would use brass in the future, most notably the Hunters and Collectors brass section known as the Horns of Contempt on their 1990 World Tour.

The overriding theme of the song is the little guy fighting back against big corporate greed and media lies; at the time News Ltd had been found guilty of telephone hacking in the UK, whilst in Australia sections of the media were seen as manipulating election results via biased reporting and editorialising. The Oils believed that the best way to send a message to the world was to wrap it in a killer beat, with great melodies, and Peter Garrett dancing around like a whirling-dervish onstage. The song used rap rhythms and cadences to name check the Whitlam government’s dismissal, the Pine Gap US spy base, Macca’s Big Mac, and they paraphrased Emiliano Zapata’s line – “…it’s better to die on your feet, that to live on your knees…” The Oils came to personify the Marshall McLuhan adage that the “medium is the message” by voicing powerful and often lacerating socio-political and environmental concerns with great effect through their music.

This promo clip was particularly effective, shot on a cold winter’s night in Woolloomooloo at a site where a railway bridge had been built despite public opposition, the murals in the background echoed the locals concerns, which were enhanced by Graeme Jackson’s animation, it was the band’s most impressive video to date. The song was initially performed in the studio against a chroma key screen, fast edited cuts of corporate greed, the media, McDonalds, crooked lawyers, and greedy accountants were added,  and allied with the animation, and Garrett’s riveting performance,  produced defining images that would be used many times in the future, and become standard Oils iconography.

The album peaked at #3 for the band’s first top 5 hit, and charted for 171 weeks, selling over half a million copies, so the album was an unqualified success, it was the Oils first top five hit in NZ, and the band’s US debut release. Power And The Passion climbed to #8, and was rated by APRA as one of the best three songs of the modern era 1926-2001, U.S. Forces charted at #20 and would become a live performance favorite, except in the USA, Peter Garratt introed the song in California, taking aim at the French and their nuclear testing in the Pacific as follows: “ A holiday for three, for you, your husband, or your wife and your deformed child to Muroroa Atoll courtesy of Club Med and the French govt.”