The band met up with producer Nick Launay again in August 1984, but this time in Tokyo, to record their fifth album, Red Sails in The Sunset, in what was a most anticipated album. Their breakthrough success with 10- 1 the year before had seen Midnight Oil emerge as a potent political force as well as an artistic one; and after touring for the album was complete, Garrett would have his first tilt at a parliamentary seat as a high-profile candidate for the single-issue Nuclear Disarmament Party in the Australian Federal election of 1984. He narrowly lost, and history may have been different if he had won, but history also has a way of repeating itself, as Garrett would discover in the future.

Garrett’s rants at live concerts had become commonplace over the life of the band to this time, his opinions were inevitably expressed  in blunt, anti-establishment terms and were sometimes confusing, and even alienating, particularly for international audiences but also for local crowds, such as this one recorded at a Melbourne Entertainment Centre concert in 1985, “ It’s not short memories which are the problem sometimes, it’s distended elongated intestinal fortitude which works through the ear and comes out the other side of the Reader’s Digest. I should point out that the Reader’s Digest is required artificial insemination material east of the Ukraine,” and when introducing the song No Time For Games  which protested the fixation of school curricula on academic pursuits to the exclusion of recreational games, creative activities, and freedom of expression “It goes back a little bit further than where we are at the moment in Midnight Oil history. It comes about when the President of Tasmania, which is somewhere near the Antarctic, decided that he would appoint an ex-Playboy bunny to stand as the commissionaire for dancing and recreation in the kindergarten schools of Australia.” The album cover was by Japanese artist Tsunehisa Kimura and featured a photomontage of Sydney – both city and harbour – cratered and devastated after a hypothetical nuclear attack, a promotional video for Best of Both Worlds received airplay worldwide on MTV.

Red Sails was very much an experimental album, Launay used a lot of overdubbing, a string section and drum machines were also deployed, there was an over-reliance on technical wizardry to the exclusion of solid rock songs. Kosiusko sounded like a drum track with vocals and guitars wrapped around it, Best of Both Worlds was recorded using a technique which required drummer Hirst and his full kit, set up and miked to be located in the bathroom of the JVC studios. The Japanese recording engineers were baffled, and not surprisingly the session was interrupted when staff, unaware of the events taking place in the washroom, went there to relieve themselves!  Lyrically the band continued to explore themes of politics, consumerism, militarism, the threat of nuclear war and environmental issues, but there was no obvious single, and little that could be described as radio – friendly. Jim Moginie would subsequently describe Red Sails as “a psychedelic, unfocused piece of work”, but the Oils diehard local fans sent it straight to #1 for four weeks, and a chart run of 63 weeks! 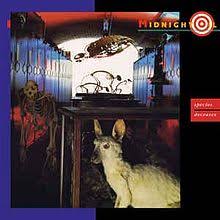 The band quickly followed up in 1985 with the Species Deceases EP, produced by Francoise Kervorkian at Paradise Studios (Syd) and was  focused on getting the band back to a gutsy, loud, live pub-rock sound, less studio trickery, more basic, visceral grooves. Hercules was the standout track, the EP hit #1 for the Oils first and only #1 hit single, but like Red Sails it was rejected by CBS/Colombia who were losing patience with the band, Jim Moginie would subsequently describe Species Deceases as “cyclonic-pub-rock-thrash.”