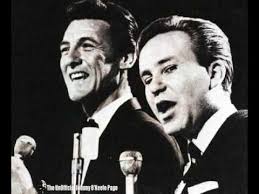 This is the first installment in a series of blogs over the next six months where we will review Ausmusic decade by decade. At the same time we will nominate our Top Ten choices for each period, from the huge and  diverse range of original local songs, from many genres, that have become our musical icons, and an integral part of the unique local soundtrack of our lives.

I hope you enjoy the journey, and feel free to comment on the songs we have selected as 4TR Top Ten hits.

All songs which satisfied the following criteria were eligible for selection:

. Was released as a single in the decade and charted primarily during that period in this country

.  Was an original composition by an Australian or New Zealand artist(s)

. Was recorded primarily by Australian and/or New Zealand artists.

. Was not necessarily recorded in Australia or New Zealand

. Selections are not genre-specific, but will reflect the artistic excellence, commercial success, innovation, and presentation of local content, that must be common to all the songs deemed to be the best in any decade.

Over the next two weeks we will review the Top Ten songs from the 1950’s/60’s, beginning with songs 10-6 this week, and following up with the top five in week two

The arrival of recorded music changed popular culture dramatically. As technology advanced, it was the records that would inspire innovation and push the boundaries to take popular music away from sheet music and show tunes to something more immediate, accessible, and entertaining. The arrival of the microgroove disc in Australia in 1952, was quickly followed by the formation of Australia’s first record company, Festival Records, who had their first #1 hit by a Australian when tenor Darryl Stewart (below) took A Man Called Peter to #1 in July of 1955. 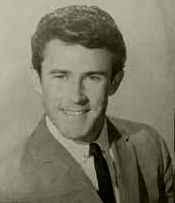 It was Festival who would chart new directions in popular music, away from the hillbilly and western-style music of such local pioneers as Slim Dusty, Tex Morton, Buddy Williams, Chad Morgan and Jimmy Little, to embrace the sounds of rock and roll, and record those at the vanguard of the new music craze in this country – Johnny O’Keefe, Col Joye (below), Lonnie Lee, Johnny Rebb, Dig Richards, and Johnny Devlin.

Slim Dusty had been a country music star since the 1940’s and in 1958 had recorded a B-side novelty song called The Pub With No Beer, which became an international hit and the tenth biggest -selling record in the country that year. Slim Dusty would release 100 albums in a legendary career in music and he continued to perform and record into the new millennium. 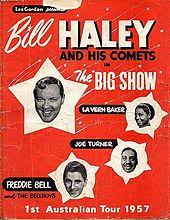 But the simultaneous release of the movie Blackboard Jungle, which used Bill Halley’s Rock Around the Clock as its theme song in 1955, was the catalyst for the birth of rock music in this country. Momentum was accelerated here upon the arrival of Bill Halley and his Comets, as stars of one of Lee Gordon’s Big Shows, teenagers became the new target market for the music industry, and young men picked up guitars, Brylcreemed their quiffs, put on their blue suede shoes, and tried very hard to look and sound like Elvis Presley. 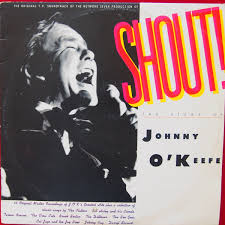 Our early rockers were imitative and their music was often derivative of US performers, cover versions abounded and with few exceptions there was little to distinguish even local original songs from overseas imports. The Wild One by Johnny O’Keefe was the first truly original rock song to chart locally in 1958, it was a landmark event, and signaled the arrival of our country’s biggest local rock star who still rates with John Farnham and Jimmy Barnes, as one Australia’s three pre-eminent male solo performers of all time. Others including Johnny Devlin, Jay Justin, Barry Stanton, Johnny Ashcroft (who had a hit with Little Boy Lost in 1960), and surf rock stars like Jim Skiathitis and Peter Hood of the Atlantics, all created original hit songs, worthy of international success, but the tide of public opinion and the flood of available product from the States, was overwhelming.

Performers such as Col Joye, Johnny Rebb, Bryan Davies, Frank Ifield, Warren Williams, Lonnie Lee, Rob EG, and Johnny O’Keefe, plundered the back catalogues of overseas artists and songwriters seeking inspiration for their next hit, sometimes putting a new twist on an old song, but rarely venturing too far from original arrangements and orchestration. Female artists struggled for opportunities during the early rock era, those who belonged to the “Bandstand Family” such as Judy Stone, Patsy Ann Noble, Little Pattie, Pat Oakley, and Lee Sellers churned out inoffensive surf and pop songs, while the gutsier rock singers like Betty McQuade, Laurel Lee, Del Juliana, and Judy Cannon did great live gigs, and occasionally hit the charts, Betty McQuade’s Midnight Bus with the stunning backing of Melbourne’s Thunderbirds, was a garage rock classic from 1961.

Television was initially slow to respond to the new craze but gradually two shows emerged that would capture the zeitgeist of the times, Johnny O’Keefe’s Six O’Clock Rock on the ABC and Brian Henderson’s Bandstand, on GTV9 (below), the latter was modeled on Dick Clark’s US Bandstand, and slavishly patronised Festival Records artists who became known as the “Bandstand Family”. Several are pictured below with compere Brian Henderson and are from right to left Noelene Batley, Lucky Starr, and Bryan Davies, the show increasingly gravitated towards a sanitised, homogenised, middle of the road version of pop music, and came to shun the stone cold rockers. 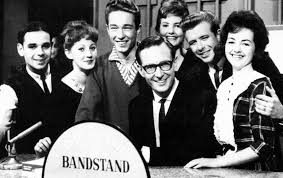 Many of the local cover versions of records were of a high quality, Frank Ifield scored four #1 UK hits in the 1960’s whilst working with noted producer Norrie Paramor there, Col Joye had no less than four local top five hits in 1959 which were all covers. O’Keefe similarly enjoyed great success with covers of US songs, his four #1 hits were all Brill Building (NYC) or Gold Star Studio (LA) creations, and Lonnie Lee also had hits with covers, even though his biggest chart success, I Found a New Love (#2 in ’60) was composed by legendary local producer/songwriter Nat Kipner.

But there was to be a seismic change in the local scene. On July 3, 1963 Australian promoter Ken Brodziak (below) made a deal with a London booking agent to secure an up and coming band called the Beatles for a national Australian concert tour for a fee of a £2,500 per week. Within the next 6 months the band exploded internationally, and Beatlemania was rife. American promoters were now offering £50,000 per show, but the deal had already been done and in June 1964 the Beatles were in Australia. The 1950’s and 1960’s PART 2 refer to 4TR blog on June 9th. 2020 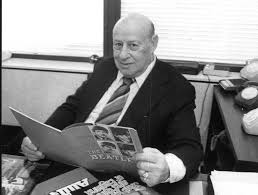 In the coming months 4TR will explore the music of the 1970’s and every decade thereafter, up to 2019, and nominate the top ten hits for each era, let me know about your favourite Ausmusic songs from each decade, looking forward to hearing from you.