Cold Chisel were an eclectic and diverse group whose members came from disparate backgrounds and enjoyed a volatile existence over a decade in which they became the greatest live act in Australian rock music.

Don Walker (above), the introspective academic, composer and keyboard player was inspired by the music of Ray Manzarek, Steve Winwood, Brian Auger and Richard Manuel, and insisted on completing a post-graduate degree in Quantum Mechanics at Armidale University (NSW) before committing to the band full-time. His band mates joined him there and gigged in one horse towns until he finished his course, group solidarity and an appreciation of the special talent that their keyboard player brought to the band was evident early in their history.

Ian Moss (above) was a Territorian from Alice Springs who moved to Adelaide in 1972 and met Don Walker there, he was a high school dropout and budding guitar hero, with great natural ability and a fantastic work ethic, he heard the music of Hendrix, Beck, Blackmore, and Page and saw his future in a rock and roll band.

Steve Prestwich (above) and his family emigrated from Liverpool (UK) to Adelaide in 1972, his father was a drummer with the Victors, a local beat group who had played the legendary Cavern Club. Young Steve was regarded as a drumming prodigy with a bright future, the Beatles, Led Zeppelin, Deep Purple and Jethro Tull were his musical heroes. He was reluctant to emigrate, but when told of the vibrant local music scene in Australia, was ultimately persuaded to do so.

James Dixon Swan (above right with his older brother John Swan at left) was born in the infamous Gorbals district of Glasgow in 1956, his parents and their six children emigrated to Adelaide in 1961 and settled in the satellite suburb of Elizabeth. His parents divorced, and young James went to live with his stepfather Reg Barnes, he and all his siblings, except his older brother John, took Reg’s surname. Jim Barnes took his musical cues from Paul Rodgers (Free), Led Zeppelin, Bad Company, and his older brother John, who was a musician, and would feature directly and indirectly in the career path of his younger brother and the early history of Cold Chisel. Jim was balancing the demands of a railway apprenticeship and a lifestyle of experimenting with acid and an increasing alcohol consumption, not surprisingly he opted for the rock and roll life.

Phil Small (above) was not the original bass player with the group, but after several auditions in 1975 he threw in his position as a window dresser at John Martin’s department store, replaced Les Kaczmarek, and began gigging with the band around Adelaide. The group had already ditched their former name Orange, to adopt something more current, soft/hard, and double – barreled, like their UK heroes, Deep Purple, Led Zeppelin, Bad Company – to become Cold Chisel. Left to right below-Barnes, Moss, Prestwich, Small and Walker.

The volatility of the human dynamic inside the band was soon evident, they were gigging at Larg’s Pier Hotel, Countdown at The Mediterranean Hotel, and The Ritz at Mansfield Park Hotel and starting to get some attention, Prestwich left the band to be temporarily replaced by John Swan, Vince Lovegrove (ex-Valentines, below third from left, with Bon Scott second from left)) became their manager and Prestwick returned behind the skins.

Jim had been given notice to improve his vocals which were regarded as inferior to Ian Moss, he wasn’t sure he could change his tone or improve his vibrato, John Swan convinced brother Jim to leave the band and join him in Fraternity as their lead singer, (pictured below in the centre of the shot with Fraternity, performing at Adelaide’s Largs Pier Hotel.) Jim departed in 1975 but returned to Chisel in May 1976.

Prestwich and Barnes were often at loggerheads, particularly over the tempo of songs, a critical issue for the rhythm section of a band and the lead singer to be aligned on. Prestwich again threatened to leave the band but stayed, Vince Lovegrove handed over management of the band to Ray Hearn, and it was generally agreed that Barnes stint with Fraternity had seen him mature as a performer with a more dynamic stage presence. At this time EMI and all other major record labels had passed on signing the band, in 1977 Barnes got restless again and was looking to leave and join the Kevin Borich Express but their manager Michael Chugg vetoed the deal, John Swan again appeared on the scene and tempted Barnes to join his fledgling band Feather, but Jim stayed put.

In 1977 manager Ray Hearn was replaced by Rod Willis who came with good credentials after working with such UK bands as Fleetwood Mac, UFO, King Crimson, Emerson, Lake and Palmer and Savoy Brown, and he enjoyed a long and mutually successful relationship with the band over their career up till 2009. Internal dissension, creative differences, and a national touring schedule of 300 gigs a year would continue to test the fragile bonds that held the band together, they needed a recording contract to bolster their self-belief and WEA (Warners) came to the party in 1977, the band headed into the Trafalgar Recording studios in Sydney with inexperienced producer Peter Walker, former guitarist with Perth band Bakery (pictured below with Bakery at far left), to put down their debut self-titled album. 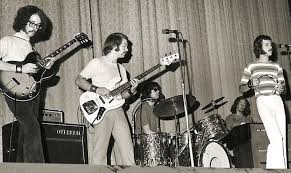 They were snatching studio time while simultaneously touring as support act with Foreigner, their debut  album had poor sound quality, Walker condemned his lyrics as being overly “flowery” but it climbed to #31 on the charts and a photo of Micki Braithwaite, Daryl’s then-wife, backstage at a concert, was a welcome addition on the album sleeve (below). Walker wrote all but one of the tracks and the result was a genre-hopping mix of blues, jazz, and hard rock, reflective of Walker’s inspirations, and mostly about his former girlfriend Rosie, from his Armidale days.

Peter Walker had failed to capture the dynamism of a live Cold Chisel performance in the recording studio and the local butchering of the record in the mastering stage caused the band to virtually disown the album over time. It would be fair to say that there were no big singles off the album chart-wise, in fact the band had not intended to release a single even though radio stations were eager to play the standout track, Khe Sanh, which was a shining light at the end of a long dark tunnel, and despite its less than stellar chart impact at the time, it would become a bona fide Australian rock classic. It was widely banned two weeks after its release due to its content, and only inched its way up to #41 on the charts, but ARIA would confer a much-deserved honour on Khe Sanh in 2001 when it nominated Australia’s best original  songs, and Khe Sanh definitely made the top ten then. 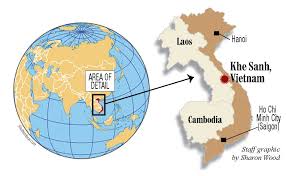 Khe Sanh was named after a battle in Vietnam’s Huong Hoa district and was fought between US marines with elements of the South Vietnamese ARVN, and the North Vietnamese Army. The only Australian personnel to be directly involved in the siege were the crews of Canberra bombers operated by 2 Squadron, Royal Australian Air Force, who flew close air support missions in the area. The bloody siege raged over 77 days and involved 6,000 US marines and up to 20,000 Viet Cong. 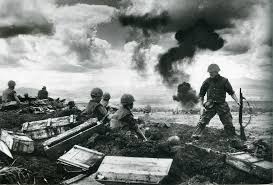 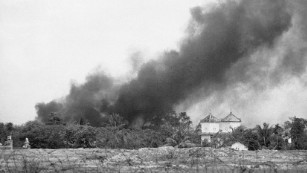 Don Walker was living in KIng’s Cross at the time and  penned the song in Sweethearts Café in King’s Cross, his regular coffee shop, and never really thought it would be released, surprisingly the song confronts such issues as love, loss, longing, sex, war, and addiction and all in just over four minutes.

The lyrics and Barnes vocal assault are visceral; the alienation, disenfranchisement, PTSD-related depression, disenchantment, and downright rejection experienced by Vietnam veterans on their return home is captured with all the energy and machismo that Barnes could muster, he was the wildest front- man in rock at the time, a crouching, sweating, roaring, Howlin’ Wolf on stage. Balancing the raw power of Barnes vocals with a disarmingly country-tinged rhythm was the artful conceit of the song which featured Ian Moss’s slide guitar, Dave Blight’s haunting harmonica, producer Peter Walker’s acoustic guitar, and Don Walker’s distinctive keyboard intro.

All these elements underscored the protest that lies at the beating heart of the song, about a confused and dispossessed veteran desperate for the last plane out of Sydney so that he could whore away his haunted dreams on a Hong Kong mattress.The boom boom girls and chop, chop shops of Saigon were a way of life for allied troops on leave during the Vietnam conflict, and all part of the dehumanising experience of being a soldier or a civilian in a combat zone.

The song has no chorus and was famously banned from airplay by the censor because of sex and drug references – “their legs were often open, but their minds were always closed”-   which limited airplay to those radio stations prepared to defy the censor. It did however boost the group’s credibility and became a much- anticipated highlight of Chisel’s live performances and a revered classic.
Khe Sanh and Redgum’s Only 19 are two of the great Vietnam War era songs, and while  Khe Sanh only charted #41 at the time, this lowly position was later confounded by APRA who voted Khe Sanh the 8th best Australian song of the period 1926-2001, a more fitting status than that conferred on it by fans when first released