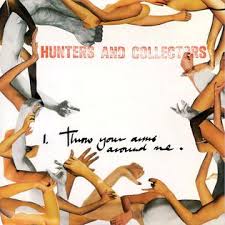 Early incarnations of bands that what would evolve to become the Hunters and Collectors, coalesced around lead singer and songwriter Mark Seymour while he was a boarder at Ormond College, Melbourne University (below) in the 1970’s, and included The Shnorts who performed bad taste covers of such classics as To Sir with Love and Set Me Free, and later the Jetsonnes, who traded in light, bouncy, post-punk pop. 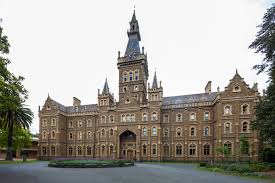 Personnel arrived and departed, but the band survived for eighteen years because its self-belief was rooted in a brutal solidarity and shared ownership of the creative output of all band members. The Hunters identified with their audience in a unique way as well, the live chemistry of their sonic anthems was founded on a curious mix of egalitarian connectivity with their fans, spiced with intellectual pretentiousness, and surprisingly, all within a hedonistic pub rock milieu. Mark Seymour (elder brother of Crowded House bassist Nick Seymour below right) has described the band as “the great misfit outfit of the 80’s,” most agree that they were also the most successful pub band of that decade. 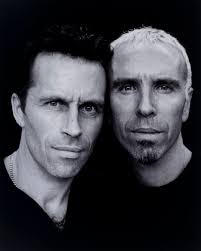 The collective dynamic of the band was intense, they were earnest, doggedly democratic, unionized, intimidating to outsiders, everything was shared – the sound engineer/graphic designer Robert Miles got a share of royalties, songwriting was an incremental process of shared adrenaline, negotiation, analysis, and non-verbal communication, the band’s collective ideology was paramount, and a failure to toe the party line meant exclusion from the group. 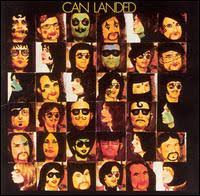 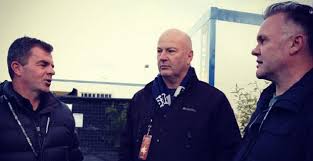 Their music was subsequently muscled up by the addition of brass in the form of the Horns of Contempt (Jack Howard, Jeremy Smith and Michael Waters, above left to right), to achieve a powerful brass-driven sound that would characterize most of their hits, the collective had now grown to ten in number and included the  brass section of three, two percussionists and a sound engineer, they had become quite the travelling menagerie. 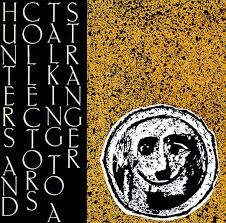 The Hunters and Collectors made their live debut at the Crystal Ballroom (Melb) in 1981 and performed regularly at the Oxford Hotel in Swanston St (Melb), their live performances were incendiary, chaotic, provocative, and encouraged a kind of tribal following, Mark Seymour has described their debut performances as “controlled jamming”, they were quickly signed to Mushroom affiliate label White, and amazingly remained with this label throughout their career. A self-titled debut album was issued in 1982 which featured resounding percussion and riveting brass, the album charted at #21 and the under-appreciated single Talking to a Stranger charted #59. The Richard Lowenstein video was a trippy, nightmarish descent into Gothic weirdness, underscored by the bottom end bass of John Archer we are lulled into a false sense of security by tranquil scenes at the old St. Kilda railway station, only to descend into a dystopian world, which references the Lord of the Flies and Mad Max, it was menacing, bleak, and discomforting, and this was their debut single.

The band departed for the UK and spent a frustrating period between 1982-84 recording with Can’s Konrad “Conny” Plank in Germany, fighting with Simon Draper of Virgin Records about the band selling out commercially, and struggling to get live gigs in a British music market in the grip of economic recession. 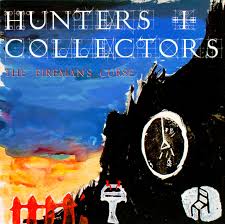 The first album the band produced with Plank was The Fireman’s Curse in 1983,at Neunkivchen in West Germany,  it was uncommercial and intended to be so, it was a declaration of intent by the band to Virgin Records, which was ultimately self-defeating, and in retrospect Mark Seymour has described the album as “ a completed body of work…recorded with the utmost care and attention to detail … (that) was an unmitigated disaster; an awful collection of tuneless songs full of twisted invective (mine, mostly) and apocalyptic moaning,” 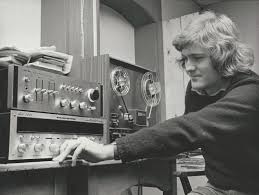 It charted #77 locally and top 50 in NZ, the singles Judas Sheepand Sway failed to chart, Virgin had dropped the band following a disastrous falling-out with Simon Draper (above) of Virgin over an Indian meal arranged to celebrate the band’s new contract with the company. Champagne and hash were consumed which fueled Antipodean sentiments of insecurity and aggression when confronted with the polite but patronizing indifference of their British host. The band would never recover from the negative impression that Draper formed about the band, and this incident must go into the annals of history of expatriate Aussie bands who failed to seize the moment overseas along with – the Sports and the disastrous live set they played to an A-list audience in New York after consuming hash, and You Am I knocking back an opportunity for Berlin Chair to be used in a Budweiser beer commercial in the USA, to break them in that market. 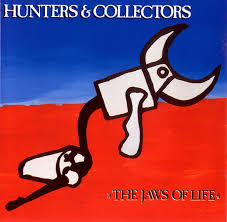 The release of the band’s third album, The Jaws of Life, a concept ostensibly based on an incident in August 1983 when Douglas Crabbe drove his vehicle into a hotel at Uluru and killed five people, was the product of another recording session with Conny Plank at Can’s recording studio in Weilswurst, Germany. It heralded the transition of the band towards a more accessible pub rock aesthetic, away from the more elitist, even pretentious content of previous albums, to a more rootsie boogie-rock, spiced with Mark Seymour’s confessional lyrics. In retrospect Seymour said he thought that Jaws was” physically compelling… (but also) distant, arty, even pompous,” and that he wanted to personalize his songs, and dig deeper into his emotional core.” 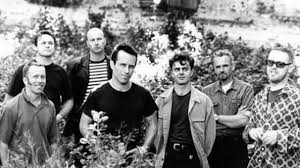 As the band’s pub rock credibility grew, the Hunters songs were more characterized by urgent, violent, dramatic, passionate, all-consuming sexual intent. Embodied in the powerful physique, anguish, testosterone and in this song, the incongruous vulnerability, of front-man Mark Seymour. Throw Your Arms Around Me became a secular hymn of great emotional intensity, a sensitive love song about Seymour’s partner May, a smoldering torch song which exposed a latent tenderness, and subsequently it became a live performance favorite. The intro is lyrically riveting “I will come for you at nighttime/ I will raise you from your sleep/ I will kiss you in in four places/ I’ll go running along your street.” The song captures the fleeting nature of sensual love “…and we may never meet again, so shed your skin and let’s get started…” the ephemeral nature of personal contact and that brief moment of total immersion, in each other’s euphoria.

Carnality and male bravado are a potent mix and never more so than when embodied in a slow tempo, heavy bottom end, semi-acoustic refrain, recorded primitively live on two-track tape, which was the ultimate version of this song by the Hunnahs.

Mark Seymour contributed this coda to the song as part of the liner notes to the “The Great Australian Songbook “When she left me in the morning, I lay in bed for another hour. I stayed perfectly still because I could still feel her all around me – inside my muscles and bones. I got up though, had a shower to wash her off.”

A passionate love ballad, a paean to a one -night stand, a long- distance love affair, this song has many guises, yet each one can be appropriate and highly personal depending on when or where you hear it. In his memoirs Thirteen Tonne Theory, Seymour wrestled with the complexity of his relationship with May “She could cast a spell of sensory wonderment, she could make your heart float through the world as free as it ever could be, and then crush that spell with merely a glance , or a withering phrase seething with unbridled contempt.” 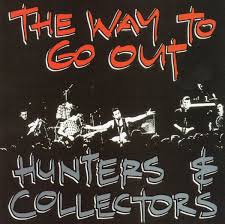 Originally issued as a single, and then included on The Way to Go Out live album, and further revamped for their Human Frailty album, it was a song that the band were drawn back to, to re-interpret, searching for the DNA lurking in its musical metaphors and lyrical nooks and crannies. It charted #49 nationally and #30 when re-released in 1990, APRA rated this one of the best Australian songs of the modern era in 2001.The album artwork revealed the H&C symbol where the “&” is stylised with twin snakes entwined around a hunting knife, as a variation on the traditional caduceus symbol. 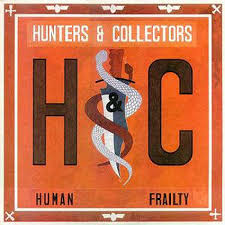