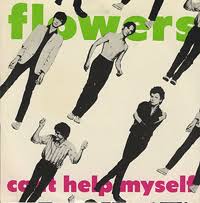 Flowers were formed in Sydney in 1977 by Iva Davies (vocals, guitar, bass guitar, keyboards, oboe), a classically trained musician, and their main creative force, along with with bass player Keith Welsh. Davies was working as a part-time cleaner at a squash court managed by Welsh’s mother, and the two lived nearby in Whale Beach, and were interested in forming a band. Additional musicians who were part of a changing lineup for Flowers in 1978 were Michael Hoste on keyboards and Don Brown on drums, the band built up a strong following as a live act on Sydney’s northern beaches pub circuit, providing distinctive cover versions of songs by Roxy Music, David Bowie, Lou Reed, T-Rex, Ultravox, and Brian Eno. Flowers left to right below – John Lloyd (drums), Iva Davies (guitar, keyboards, vocals), Keith Welsh (bass), and Anthony Smith (keyboards) 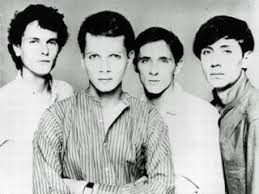 Davies summed up the era in an interview with The Australian:” I know it’s easy to look back through rose-tinted glasses and say that period was good, but its accurate to say it. The energy came out of the punk movement in England and transferred here, when we started up we were doing Sex Pistols songs alongside T. Rex and Lou Reed songs, it was quite a weird collection of stuff. That whole energy ran into the new synthesiser technology as well, and as incongruous as it sounded, we were described as a “glitter-punk” band.” By the middle of 1979 John Lloyd (ex- Paul Kelly and the Dots) replaced Don Brown on drums, with Anthony Smith on keyboards, replacing Michael Hoste, who still remained associated with the band.

Their breakout strategy, as devised by their new manager Ray Hearn of Dirty Pool Management, was to relentlessly tour the band nationally, until they had developed a fanbase, before releasing their debut record. After signing to the independent Regular Records label, distributed by Festival, Flowers released their debut single in May 1980, Can’t Help Myself (written by Davies), which hit the Australian Top 10 in June 1980, and lifted the band onto a new trajectory.

Iva Davies was a classically-trained oboist, who could read and write music, a rarity in the rock music business, and he was also a demanding taskmaster, who fined bandmates if they hit any wrong notes during performances, but the band was now emerging as a synth-pop group of some stature. 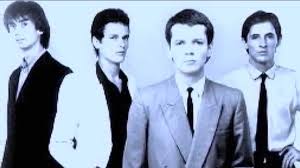 This was the era of New Romantic and New Wave music, but pub rock still ruled in Australia and Flowers walked the line between the two genres, although on Can’t Help Myself the influences of such acts as Ultravox, Cars, and Gary Numan are discernible. The band played support for David Bowie on his Australian tour and took Can’t Help Myself to #10 nationally, the Flowers like the Divinyls, The Numbers, INXS, The Reels, Sports, Mental as Anything and other bands were crossing over from post-punk 1978 to the Eighties, as part of what would become known as the New Wave.

Their debut single success was followed by their album Icehouse which reached #4 nationally and became one of the year’s biggest selling albums in Australia. Co-produced by Cameron Allan (Mental As Anything) and Davies, it made extensive use of synthesisers including the Minimoog, Solina Strings, and Oberheim OB-1, Hoste co-wrote four tracks with Davies and played additional keyboards, with Smith still continuing to perform as the main keyboard player.

The follow up later in the year was another Iva Davies composition, We Can Get Together, it was the first time that Iva Davies had composed for guitar and not the keyboard. The song featured jangly guitars, organ and an insistent opening bass guitar riff which carries the song forward, the lyrics are relatively simple and use nursery rhyme references, “you can buckle my shoe” “you can pick up my sticks” “you can knock on my door”. Flowers and their subsequent incarnation as global hit makers Icehouse (below), were strongly committed to using promotional videos and two were developed to push this record, one each for the Australian and UK markets, which charted at #16 locally.