Kevin Parker was rapidly becoming one of the most famous and prodigious creative loners in world music, from his soundproofed, air-conditioned cocoon near the Fremantle beachfront in Perth (WA), he would sit in front of a large computer monitor logging thousands of hours as he agonised over the minute details of his elaborate arrangements, fueled by spirits, wine, fast food, and marijuana. A battery of keyboards and synthesisers adjacent to a mixing desk, a small front room occupied by a drum kit, a single bedroom housing his bed and guitar collection, including his beloved Hofner bass guitar, all constituted part of the aural arsenal at the disposal of Australia’s newest musical auteur.

In recent years Tame Impala’s global success had enabled Parker to commute between his Perth music cave, and a 5 -bedroom house in the Hollywood Hills of Los Angeles, where he spends six months a year, and since 2019, he has shared that space with his wife, Sophie Lawrence (wedding day photo below), as he creatively interacts with other performers, often writing/producing songs for such artists as Mark Ronson, Rihanna, Lady Gaga, and Kanye West. 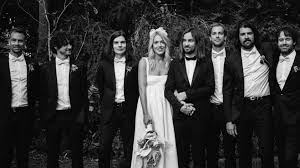 Tame Impala’s second studio album, Lonerism, once again maximised the use of new technology while at the same time tapping into the progressive and experimental spirit of psychedelic rock, its zeitgeist and not just its sound.

Parker is not obsessed with creating flawless period pieces cryogenically frozen in time, the opening track Be Above It, with its subliminally whispered vocals, barrelling drum break, and distorted guitar, opens proceedings impressively .The very next song Endors Toi (French for to “go to sleep”), bridges the gap between Innerspeaker and the poppier side of Parker, as erratic drum patterns settle into a barely-there pulse, as synthesisers vibrate in the background, and lyrically we opt for the escapism of dreams over the mundane existence of real life, and before we know it we are enveloped in mostly instrumental music for the first seven minutes of Lonerism.

By the time we reach Elephant, the first song released as a single off the album, the party has well and truly started as this emphatic serve of glam-rock with prominent bass guitar riffs, a synth-led mid-section with lots of special effects, and a mini drum solo at the outro, stirs us from our reverie, and has Kylie Minogue-style banger pop stamped all over it. All the while Parker’s voice sounds like someone had trapped John Lennon’s vocals from A Day In The Life in a sound bubble and twisted it into new songs, that are eerily embodied in Elephant and also evoke the wakeful and passive state of psychedelia, so reminiscent of the Beatles I’m Only Sleeping. Like much of the album Elephant succeeds in stacking vocal and guitar harmonies upon each other in a cool and entrancing way, it took Tame Impala onto the US charts at #36 for the first time as they gradually built momentum in this competitive market.

The second single taken off the album was the catchy, shimmery, trippy sound of Feels Like We Only Go Backwards, a deeply melancholic and melodic song that Kevin Parker had intended to be a lighters-in-the-air anthem a la the Backstreet Boys; and with an earworm of a chorus, a dense pulsing bass line, and impulsive drumming, there was much to like about a song that took Tame Impala back into the US top forty at #37. The album, Lonerism climbed to #4 locally, #34 in the US, and  #14 in the UK, won the 2013 ARIA Awards for Best Rock Album and Best Debut, and became Tame Impala’s most successful album to date.

Australian artist Leif Podharsky was again responsible for the cover artwork, based on an image that Parker had taken of the exterior gate of the Luxembourg Garden in Paris. The image ties into the themes of isolation of Lonerism with the gate separating the viewer from the people in the gardens. The sign on the gate written in French translates to “Dogs, even on a leash, are not permitted beyond this point” in English. 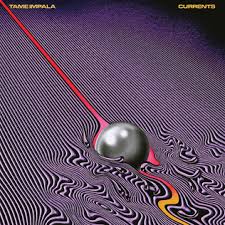 As loneliness, withdrawal, isolation, and alienation had been the dominant themes on Parker’s first two studio albums, it was assumed that after his 2014 breakup with Melody Prochet (pictured below with Parker), lead singer of the French psychedelic rock group Melody’s Echo Chamber, that these themes would persist into the future. 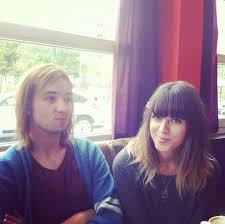 But Tame Impala’s third studio album, 2015’s Currents, finds Parker diving into the currents of life, immersing himself in its turbulent streams, however this doesn’t mean that a joyfully sunny or ebullient collection of songs emerged, he is heartbroken, bitter and regretful, as the two year relationship with Prochet ended, and this experience reflects in his new songs, in a confessional way that apparently she found uncomfortable. Eventually, New Person, Same Old Mistakes,(subsequently included on Rihanna’s 2016 album Anti), and the first single lifted off the album, Let It Happen are break up songs, and there is also a discernable change in his musicality, as he moves synth sounds up to the front and relegates guitars to a lesser position in the mix. 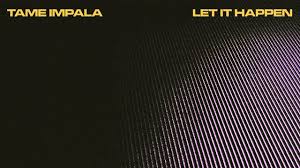 Let It Happen has become one of Parker’s most famous songs and video clips, a seven-minute salvo of concentrated chest-thumping, arm-pumping, rave-inducing psychedelic-disco, where filtered drum patterns and something that sounds like a loop accidentally stuck on repeat, drives the song forward, so that you hardly notice that guitars are barely audible. The densely layered vocals and sharply-defined riffs are testimony to Parker’s production and sound engineering skills, the video was filmed in the Boryspil International Airport, Kyiv, Oblast, Ukraine and the Hilton Hotel in Kyiv, and in about 4 minutes it encompasses cardiac arrest, death, alternative universes, dreaming, the afterlife and mid-air disasters “ Oh, but maybe I was ready all along/Oh, I’m ready for the moment and the sound…” take the trip, unless you’re an aerophobe.

The fourth single taken off Currents was the addictive disco-pop of The Less I Know The Better, a song of unrequited love, but with Kevin Parker nothing is as it seems, and in the video metaphors abound, as what appears to be a typical menage a trois between a high school basketball star and a sexy cheerleader, gets complicated when she falls for the team mascot, a guy in a gorilla suit, unrequited love has never been quite this weird.

Musically the addictive bassline, uplifting synths, church bells, and ringing guitars, made for a truly inventive song, which became Tame Impala’s biggest hit of the 2010’s, with over 450 million streams on Spotify, and a total of 770,000 sales and downloads.

The album was #1 in Aust, the Netherlands, #3 in the UK and #4 in the US, it also won the ARIA Award for Best Rock Album in 2015, the beguiling cover art for Currents was created by US artist/musician Robert Beatty and was based on a diagram of vortex shedding that Parker remembered while he was trying to visualize the album’s themes – the flow of air or liquid around an object.