Parker is a famous studio nerd who looks for the meaning of life in the swirls of his dreampop landscape, ever the musical voyeur and perfectionist, he is never completely satisfied with his songs, and his obsession with re-imagining, perfecting and experimentation means that his constant enemy is – time. Parker’s seemingly endless noodling embraces technology which includes such favored and often-used effects as phasing, delay, reverb, and fuzz tone, and he experiments with different effects and pedals such as the Roland RE-20 Space Echo, which has enabled him to create new and unique sounds. “If you make an effort to not put the pedals in the order you’re meant to, then you’ll end up with something new sounding. We don’t have any things that we got from another planet or anything, it’s the same things everyone else has used.”

By the time Tame Impala’s fifth album, Slow Rush was released in 2020, there had been five years between albums – an eternity in the world of pop culture, where music has never been more accessible and disposable.

Several singles were pre-released before the album, the first was Patience, rush-released in time for Parker’s appearance at the Coachella Festival, and inexplicably not included on the album, it was a shimmering, psych-disco fusion that combined a powerful piano riff, with auxiliary percussion to produce a bouncy, layered pop song, and a genuine dance-floor anthem. Borderline was aiming to chart similar dance-floor territory as Patience, and while it possessed all the beguiling wistfulness of a typical Parker composition, the pan flutes and Parker’s soulful vocals were engaging, its chorus was lacklustre, and the soft rock ambience did not ignite clubland, but it has become a recent favorite on Tik Tok.

Slow Rush was the first attempt at a concept album by Tame Impala, the tracks are bookended by the opening track One More Year and the album closes with One More Hour, Parker wanted to tell the story of a character who chooses to spend just one more year acting out – irresponsibly, and to excess – before resolving to get his life back in order, no doubt an autobiographical journey as envisaged by the newly-married singer/songwriter. One More Year featured the familiar Parker tropes of sound loops, a robotic chorus, and tremolo effects, but it was lyrically intimate “ Do you remember we were standing here a year ago/ Our minds were racing , time went slow…”, while One More Hour captured the last hour of that year, in a bare, brooding track drenched in echo, strings, heavily-phased guitars, crashing drums and synthesisers, bringing the curtain down metaphorically on a period in Parker’s life. 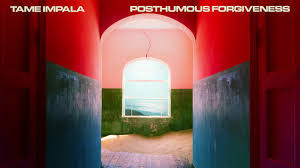 Posthumous Forgiveness was the most intimate song on the album, a reproachful/cathartic postcard by Parker to his late father Jerry who had died of skin cancer in 2009, and from whom he had been estranged for some years. Although Kevin Parker generally favours metaphor over real- life storytelling, and he usually writes the music first, then synchronises the words and timing; but here he  bared his soul, and reflected on a roller-coaster childhood in which he and his brother and sister gravitated between their divorced parents homes in Perth, even enduring a doomed reconciliation by his parents ten years after they had divorced, and the subsequent arrival of various half-brothers and half-sisters. When Jerry discovered that young Kevin was drinking alcohol, smoking weed, and experimenting with LSD, he was banned from seeing his friends and lived a solitary existence for some years, these were the lost years of familial intimacy: “And you could store an ocean in the holes/ In any of the explanations that you gave/ And while you still have time, you had a chance/ But you decided to take all of your sorrys to the grave.” But the final part of the song is unmistakably the sound of a young man who misses his dad: “Wanna tell you ‘bout the time/ Wanna tell you ‘bout my life/ Wanna play you all my songs/ And hear your voice sing along.” Grim synths and repeated kick drums hammer out the anger and frustration of the first part, but segue to a more mellow, forgiving, accommodating Parker, sublimating his angst, and wrapping his message in masterful electronic strokes.

Breathe Deeper was the fifth single taken off the album and it’s about the intensity of Parker’s first experience with ecstasy, when he was twenty ” Seems you’re coming on/ Breathe a little deeper, should you need to come undone/ And let those colors run (It just so) now you’re having fun/ So do this and get through this, and come find me when you’re done/ So we can be as one.” A funky bassline, disco keyboards, and swirling synths created the appropriately spacey, floaty, vibe of an indie track with a 70’s sensibility.

It Might Be Time was the second single lifted off the album and the style and sound of the opening keyboards channeled UK’s 70’s prog-rock-pop band Supertramp, and their founders Rick Davies and Roger Hodgson, who were one of Parker’s early inspirations, “their music had that explosive quality, that big sound with introspective lyrics. I love that they’re exploding outwards, inwardly.” A propulsive drumbeat and driving guitar riffs bathed in reverb, underscored the lyrics which are a rumination on aging and maturity by Parker who was thirty-three years old at the time: “It might be time to face it/ It ain’t as fun as it used to be, no/ You’re goin’ under/ You ain’t as young as you used to be.”

The cover art for Slow Rush was as surreal and cerebral as most of Tame Impala’s previous releases, as it graphically captured images of the isolated former diamond-mining town of Kolmanskop returning to nature as the sands of Namibia’s Namib desert slowly engulfed the formerly -thriving community. Founded in the 1910’s the diamond mine once accounted for 10% of the world’s diamonds, and produced a million carats each year until the 1930’s when the stones ran out, and the community moved on. Photographer Neil Krug and Kevin Parker travelled to the site, shooting a series of images of the once lavishly-endowed town which had boasted its own concert hall, hospital, schools, bowling alley, and factories; but as the irresistable forces of nature –  shifting sands, baking sun, and swirling winds – inexorably reclaimed the land, Parker sensed  that the otherworldly nature of these surroundings, perfectly captured the dreamy, psychedelic tone of his music.

Slow Rush was a monster hit for Tame Impala, the album debuted at #3 on the US Billboard charts, and remarkably all twelve tracks charted on the US Rock charts from #2 – #17, with peak numbers including #2 Breathe Deeper, #3 Borderline,  #5 Lost In Yesterday, #8 Posthumous Forgiveness and It Might Be Time, and #10 Is It True and Patience. The album was also #1 in Australia, Portugal and Scotland, #2 Netherlands, #3 UK and NZ, and #8 Sweden, and sales in excess of 2.5 million will make Slow Rush Kevin Parker’s biggest global success.