The seventh album by Air Supply was Now And Forever, Harry Maslin continued to helm the production of Air Supply albums and Frank Esler-Smith (below) was again the conductor, keyboardist, and orchestral arranger. The song was written by members of a US studio session group known as Bama, they were Terry Skinner, Ken Bell, and J.L. Wallace, who had previously written Touch Me When We’re Dancing, a #16 hit for the Carpenters in 1981.

Even The Nights Are Better was the first single lifted off the album, and lyrically it focused on the restorative power of true love, and is sung from the perspective of a man who has lost a significant other, as captured in the into to the song “ I was the lonely one/ Wondering what went wrong, why love had gone/ And left me lonely…, while the remainder of  the song is more hopeful and celebratory as the man finds a new love who has experienced the same feelings of loss and alienation as himself, and together their love grows “You knew just what to do/ “cause you had been lonely too/ And you showed me how/ To ease the pain and/ You did more than mend a broken heart…”

It was another power ballad by the duo, and a solid #1 hit in Canada, #35 in Aust, #37 NZ, #44 UK, and sat atop the US Contemporary Charts for four consecutive weeks, it also climbed to #5 on the US Billboard charts. But this song would hold the unenviable record for exiting the US top 40 in the shortest possible time, a week after it peaked, descending from #5 to #42 in one week, Taylor Swift ultimately beat this record when Tay Tay swiftly took her release Red from #6 to #54 in one week in 2012. The promo video was filmed in and around the beach, boardwalk and amusement park at Coney Island, Brooklyn, New York.

The album charted #25 in the US for the band’s last platinum studio album there, and hit #35 in Aust, two more singles were released from the album and both were minor US hits. Young Love (US #38) was another Graham Russell song and the formulaic songwriting was starting to pale for fans. An intro of keyboards underscored opening vocals by Graham Russell who is seated at a piano in the promo clip; Hitchcock delivers the more dramatic/plaintive tenor vocals on the chorus, as ballet dancers twirl around the set amidst dry ice, power ballad guitar in-fills take us to the outro as split screen images of the two singers appear.

Two Less Lonely People (US#38), was another standard Air Supply vehicle, with keyboard intro, lush orchestration, subtle power ballad guitar in-fills but this time Hitchcock delivers solo vocals, which at this time had become rather strained and piercing, in the same way that Barry Gibbs falsetto had become grating and mechanical in the later hits of the Bee Gees in the 80’s.

In 1983 the band released their Greatest Hits album which contained eight of their tried and proven chart-toppers from the previous four years as well as a new song written and produced by Jim Steinman, Making Love (Out Of Nothing At All), which provided a career-boost for the band and retro-fueled the album sales to an impressive 7 million copies in the USA alone. It was also a #1 hit in Australia and a big seller throughout Asia, where the band had established a strong following in the Philippines, Singapore, Hong Kong, and Taiwan. 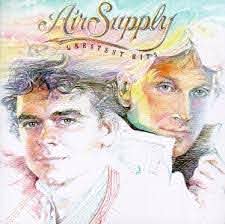