By 1984 Jimmy Barnes had become an uncomfortable fit within Cold Chisel, he was the only married member of the band, with his wife Jane and child Mahalia to support. He craved the financial security that had eluded him his whole life, and wanted to make major changes to the financial arrangements between the band and their manager Rod Willis. Barnes believed the financial management of the band’s affairs lacked transparency, and provided only a miserly living allowance, for the members of a band that was the biggest in the country. Barnes wanted to purchase a property in the Southern Highlands (NSW) and make a home there for his family, he proposed that their manger only take his 20% share of income after operational expenses (travel, accommodation, support crew, transport, support bands, lighting, sound system, advertising/promotion etc.) had been deducted from the band’s gross earnings, not an unreasonable proposition.  But Don Walker, the creative and spiritual leader of the group and the rest of his bandmates did not support him, so at this time Barnes decided his future was no longer with the band he loved.

After releasing a final Cold Chisel album, Twentieth Century, and completing an obligatory final national tour, The Last Stand, the band dissolved, and Barnes went about re-inventing himself as a solo singer, signing up with Michael Gudinski’s Mushroom Records, and retaining Steve Hill, friend, neighbour and former Director of the disgraced merchant bank Nugan Hand, as his manager, Hill had no prior experience managing rock stars.

There were several songs that Barnes had written with Cold Chisel, which were sometimes demoed, but not released by the band, these included No Second Prize, written in 1980 as a tribute to Allan Dallow and Billy Rowe, two Chisel roadies who had died in a horrible crash in 1980. By 1984 the song would also reflect Barnes feelings of doubt, desperation, and hope that he was feeling about leaving Cold Chisel, losing the protective shield of a band of brothers, and unable to rely on the musical genius of Don Walker, to produce hit songs. No Second Prize was released several months before the album and it set the template for the Barnes sound, raw, gutsy guitars, a tight thrumming rhythm section, and Mal Eastick’s solo guitar wizardry. 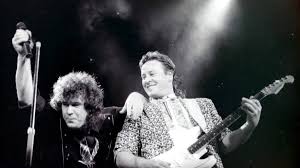 The promo video featured Jimmy in the role of a cowboy/outlaw pursuing a train on horseback, filmed on the Moss Vale railway line (NSW) with Mal Eastick (above with Jimmy) performing whilst on the train, as Jimmy on horseback gallops alongside the speeding train, no protective helmet was evident, it was rollicking, escapist, and action-packed – and very wild west in a “Jimmy The Kid” kind of way.

Promise Me You’ll Call was a message in a time capsule that Barnes wrote for his first child Mahalia, as he explained in his memoirs Jimmy Barnes – Working Class Man (2017) “If she grew up and  was anything like me, she would leave home, and I would never see her … and I thought she might hear this song and call me.”

Paradise was conceived after an all-night recording session with Chisel at the Paradise studios (Syd), and again Barnes captured the inspiration for this song in his memoirs of 2017 “I was rattling from copious amounts of speed, coke and vodka, every cell in my body vibrating, and I wanted to write a song about it … something that moved as fast as my heart was pounding … I would either write a rock song or have a heart attack … Paradise was that song.” After another exhausting all-night session at Paradise studios, Jim returned to the apartment he was sharing with wife Jane, it had no block-out curtains, and as he lay there desperate for sleep, with the sunlight burning his eyes, the word “Daylight” became the inspiration for a song, which featured prominent rock-heavy guitars and percussion and the distinctive voices of  backing singers Venetta Fields, Renee Geyer, and Shauna Jenson.

Barnes had no intention of copying the Cold Chisel hits, he wanted un-Chisel-like fat, layered, distorted guitars on his debut solo album, and he looked around to recruit like-minded musicians for his shot at solo success. Ray Arnot was a drummer who had replaced Steve Prestwich in Cold Chisel and he came on board early, bassist Bruce Howe was known and respected by Barnes from his stint with Fraternity and he completed the formation of the rhythm section of the new band. Guitarist Mal Eastick was recruited from a former Mushroom label band Stars and Chris Stockley, formerly of The Dingoes, became the third guitarist. There were no keyboards, brass, or synthesizers, this band would play hard, fast, uncompromising music, no ballads, just relentless, brutal, blue collar rock and roll.

The debut album was Bodyswerve, produced by Mark Opitz (below) (Angels, INXS, Divinyls, Cold Chisel) and recorded at the new Rhinoceros studios (Syd.) and it was Barnesy’s first #1 solo hit, No Second Prize and Daylight both performed creditably and climbed to #12, the only miss was Promise Me You’ll Call which stalled at #86, despite being a superior and heartfelt original song by Barnes.