Nick Cave was recording his ninth album, Murder Ballads, which would be a marked digression from the yearning and romantic overtures of its predecessor, Let Love In, emerging as a gruesome suite of original bloodthirsty ballads and several visceral and profane cover versions of such standards as Stagger Lee and Bob Dylan’s Death Is Not the End, the only song in which an actual death does not occur, and where Cave was joined by P J Harvey, Kylie Minogue and Anita Lane who take turns singing the verses.

Lyrically and musically Murder Ballads was an assault on the senses, variously gory, discordant, haunting, and homicidal as it explored serial murder, crimes of passion and macabre carnality, the album’s body count was approximately 64. The track The Kindness of Strangers has been described by Cave as “simply an exercise in cruelty, sitting down and writing a character and making her so naïve and virtuous, and then wiping her out. I can’t define this, but there is a certain satisfaction in doing that.” He would return to this theme when he duetted with Kylie on Where The Wild Roses Grow. 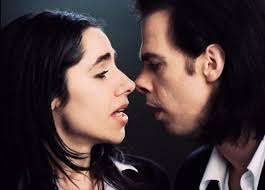 The misanthropic high priest of gloom and Gothic horror, had unsurprisingly invited his sometime partner, PJ Harvey (above with Cave), a kindred spirit, to duet with him on the third song on the album, Henry Lee, but how did the diminutive pop princess Kylie Minogue, fit into this morbid landscape of murderous school girls, distraught spouses, and psychotic killers?

For her the dark side had been to record a seemingly endless string of formulaic Stock, Aitken, and Waterman pop songs, but having escaped the clutches of the SAW Hit Factory, Kylie Minogue was taking some time to re-invent herself as a more sophisticated performer, with a greater emphasis on clubland grooves rather than bouncy pop. Confide in Me had been her last big hit back in 1992 and she had starred in several movies – The Delinquents and Street Fighter – which had all bombed at the box office, so she was open to suggestions about how to be more experimental with her song choices, when Nick suggested they collaborate. 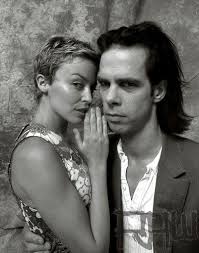 Cave has admitted that he had long held an ambition to record with Minogue whom he respected; at the time, Minogue’s former partner INXS front-man Michael Hutchence, the Devil Inside singer, liked the idea, and had encouraged Kylie to record with Nick, and the Faustian pact was sealed. “It was a miracle that she agreed to do that song,” Cave recalled to The Daily Telegraph in 2014. “I think her management wasn’t that happy about it – I mean we were just a bunch of junkies sitting in the studio, and she walked in full of life and love and goodwill.”

The musical vehicle for the unlikely pairing of the petite 1.52m Kylie and the hulking 1.89m Nick was Where the Wild Roses Grow, a song inspired by a 19th century traditional Appalachian murder ballad, Down in The Willow Garden (aka Rose Connelly) about a man condemned to die for the murder of his lover. But Cave and Minogue raised the emotional stakes by literally swapping verses like flirtatious lovers “From the first day I saw her I knew she was the one,” My trembling subsided in his sure embrace”, until Minogue’s character, Elisa Day, is brutally murdered by the brooding unnamed Cave protagonist.

Perhaps it was an ode to death, the only sure way to preserve the image of eternal feminine beauty after virginity is lost, a perfectly innocent state can never be re-created or surpassed, so it was curtains for Kylie/Elisa after only the third date.

Recorded at Atlantic Studios, Sing Sing and Metropolis Studios and produced by Minogue, Cave and the Bad Seeds, there are lush sweeping strings, subtle piano and percussion underscoring the calm, innocently naïve and affecting vocals of Minogue in one of her most nuanced recorded performances. 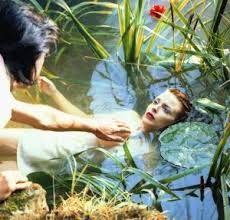 The song was one of the most popular ballads of the year, charted #2 in Aust, top ten throughout Europe, and #11 in the UK, won the ARIA Award for Single of the Year in 1996, and for a brief time Nick Cave occupied an uncomfortable pop star status. The promo video was a brief but ghostly and menacing slice of film noir which featured a snake slithering over Minogue’s lifeless corpse on the riverbank.

It was nominated for an MTV Video Music Award, but Cave wrote to MTV asking for then to withdraw the nomination, stating ” My muse is not a horse, and I am in no horse race, and indeed if I was, still I would not harness her to this tumbril – this bloody cart of severed heads and glittering prizes.” 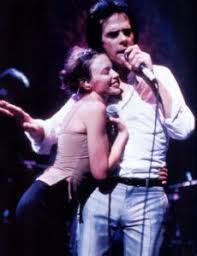 Minogue and Cave stunned the Big Day Out audience in 1996 with their live duet of this song, and repeated the performance at the 2019 Glastonbury Concert, when Nick Cave made a surprise appearance during Kylie’s set.