The band’s second album, Cargo, was recorded in 1982 at the AAV Studio (Melb), Paradise Studio (Syd) and Westlake Audio Studio (LA), Peter McIan was once again the producer and because their debut album had not been picked up globally until six months after it was a hit in Australia, the release of Cargo was be delayed whilst Business As Usual continued to do stellar business internationally. The Colin Hay composition Dr. Hekyll and Mr Jive was pre-released before Cargo onto the Australian market in October 1982, and it was a typically quirky production, introing with ominous footsteps and laboratory sounds, as the classic Robert Louis Stephenson novella of diabolical double identity, The Strange Case of Dr. Jekyll and Mr. Hyde, is re-imagined, as the lyrics warn of the devilish experiment the schizoid doctor is inflicting upon himself “ Letting loose with a scream in the dead of night/ As he’s breaking new ground/ Trying his best to unlock all the secrets/ But he’s not sure what he’s found…”.

But it was all in good fun, the promo video was more inspired by Jerry Lewis’s 1963 movie The Nutty Professor, than any nineteenth -century Gothic horror story, and the song itself echoed a year later with another zany take on the mad scientist twist with Thomas Dolby’s She Blinded Me With Science.

The promo video depicts Colin Hay as Sherlock Holmes investigating the case of Dr. Heckyll (Greg Ham), a nerdy mad scientist who is having trouble attracting women. At a party Heckyll takes a swig of his latest potion, two girls enter and harass him and also drink some of the potion, they instantly turn into palm trees, but Heckyll is transformed into Mr. Jive, a handsome, smooth-talking life of the party. The detective (Hay) disguised as a Boy Scouts leader, arrives but before he can investigate further, Jive reverts to his Heckyll persona, and departs the scene with his hunchback assistant Igor (Jerry Speiser) in tow. Other band members Strykert and Lees also appear as waiters and boy scouts, overall the video was humorous, cheaply-made, and confirmed that the band were prepared to mock themselves, the party scenes were shot in a Victorian two-storey house at 1325 Carroll Ave. Los Angeles. 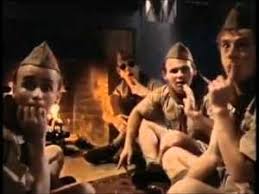 The record charted #6 in Australia in November ’82 to make it five consecutive top ten hits for the band locally, and ten months later it climbed to #28 in the USA, after MAW had already taken Who Can It Be, and Down Under both to #1, and Overkill and It’s A Mistake into the top ten Stateside.

The record charted #6 in Australia in November ’82 to make it five consecutive top ten hits for the band locally, and ten months later it climbed to #28 in the USA, after MAW had already taken Who Can It Be, and Down Under both to #1, and Overkill and It’s A Mistake into the top ten Stateside.

The third single lifted off the Cargo album was It’s a Mistake, a satirical take on Cold War paranoia in the 1980’s when adversaries on either side of the political divide postured and escalated the nuclear arms race, so fueling fears of global conflict. The song was inspired by the classic 1963 Stanley Kubrick black comedy Dr. Strangelove (How I Learned to Stop Worrying and Love the Bomb), about the imminent destruction of the human race, the film was crammed with unforgettable lines including “I can no longer sit back and allow Communist infiltration, Communist indoctrination, Communist subversion, and the international Communist conspiracy to sap and impurify our precious bodily fluids” and “Gentlemen, you can’t fight in here! This is the War Room!”

The rock-solid rhythm section of John Rees and Jerry Speiser thumped with manic urgency, while Greg Ham’s unobtrusive flute and sax refrains suggested the sort of mental processes that could conjure up the scenarios of It’s A Mistake “Tell us general, is it party- time?/ If it is, can we all come?” The promo video depicts the band members being transformed into soldiers, who are thrust into a war zone, and then a command bunker, not unlike the one used for Dr. Strangelove. An army officer nervously taps his fingers and inadvertently opens the protective cover on the nuclear button, which is next to his ashtray, and when he stubs out his cigar he accidently hits the button and activates a nuclear attack, It’s A Mistake was the fourth consecutive top ten hit for the band in the US in 1982/83, they were touring intensively, and riding the crest of a giant wave of success.