The impeccable Everly Brothers-style vocal harmonies that would characterize their many hits, was evident on their album Bee Gees 1st. from which the sublimely soulful baroque pop of To Love Somebody was the second single released. Barry performed lead vocals and the arrangement and lush orchestration by Bill Shepherd were right on the money, the exquisite use of strings – violin, harp, cello – as well as brass, and percussion, lent a stately elegance to the song and it became an instant standard. It is generally regarded as the best of the Bee Gees “pocket symphonies” from this era, closely followed by Words and I Started a Joke.

The song was originally written with the band’s manager Robert Stigwood in mind as he had asked Barry Gibb to write a song for him, and although Stigwood was an influential member of London’s gay showbiz establishment, known as the Pink Mafia, Barry Gibb has denied that there were any homoerotic undertones to the song, rather it was a tribute to a person that he greatly respected, and that person was Otis Redding (above). Barry has stated that To Love Somebody was his favorite Bee Gees song as it “had a clear emotional message”, a knowing observation by the leader of a group which has been criticized for writing lyrics that were abstract and indirect, shying away from telling their specific stories and sharing their life’s experiences in their music. 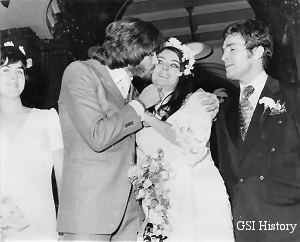 The brothers’ personal lives were definitely evolving at this time, Barry’s marriage to Australian girl Maureen Bates in 1967 was about to end after he met Lynda Gray, a former Miss Edinburgh, who was a hostess on Jimmy Saville’s Top of The Pops, reputedly they had cuddled in the Tardis, and got married in 1970 (above). Despite Barry being the Alpha male in the group, who had no difficulty in telling people, including his brothers what to do, he hated to have to give bad news in person. This reflected in his curious seduction techniques, where he carried a supply of cheap engagement rings and to whomsoever he fancied a night of passion, he would declare his undying love and “propose” marriage to get them into bed. Lynda, Barry’s future wife, had to fend off several Swedish and German “fiancees” who turned up at their penthouse flat, and made Barry promise to swear off any further extra-marital “proposals” in the future.

Maurice was dating Lulu (real name Marie McDonald McLaughlin Lawrie, pictured above at their nuptials) and Robin had taken up with Robert Stigwood’s secretary Molly Hullis (below), both twins would subsequently marry their partners, but ultimately both marriages ended in divorce, Barry’s second marriage, however was a long-term success, and he and Lynda would have five children.

To Love Somebody was written while the brothers were in New York, and recorded at the IBC Studio in Portland Place, London, in March 1967, on four-track recording equipment which was augmented by mixing the first four tracks onto one or two tracks on a second tape, leaving tracks open on the second tape so that more instrumental and vocal effects could be added.

The brothers had played a demo of the song to Otis Redding with a view to the great soul man recording it, but sadly he died in a plane crash late in 1967 before he could. In his absence however, we are left with the Bee Gees original version of this elegantly tender ballad as well as the definitive soul version of the same song by Nina Simone which charted #5 in the UK, and a more bluesy version by Janis Joplin. Michael Bolton took the song to #11 in the US and others including Leonard Cohen have also covered this song, searching for the DNA in its musical nooks and crannies, To Love Somebody became the best Otis Redding song that Redding never recorded, and Barry was only 22 years old when he wrote it.

This evocative song became an enduring and much-covered ballad which hit the charts internationally – #6 in Australia, #17 in the US but disappointingly only #40 in the UK, Barry was privately mortified at the public reception to his magnum opus, but the band would quickly bounce back with their next hit, when Massachusetts stormed to #1 globally.

The promo clip for To Love Somebody was a straightforward miming of the song for a European TV show, only the three brothers appear, even though both Vince Melouney and Colin Petersen had joined the band at this time.

Ossie Byrne would not work with the Bee Gees again after the Bee Gees 1st album was completed, once the band relocated to the IBC Studios in London, Byrne was clearly out of his depth, and his lack of technical expertise meant that he was increasingly reliant on the skills of the recording engineers around him to produce the record. The Gibbs quickly acquired studio skills themselves, so Ossie’s casual, laissez-faire style of recording, and his party trick of popping out his glass eye, soon become less relevant for a highly-focused Alpha male like Barry Gibb, who got Robert Stigwood to send him on his way, back to Sydney.

Holiday was not a hit for the Bee Gees in Australia nor the UK as it was only ever released as an album track in these countries, but when released as a single it charted #16 in the US and was a typically lush production with Robyn and Barry sharing lead vocals and backup, the lyrics were quite opaque and the repetition of the “de, de, de, de, dees” seemed to indicate that the lyrics were rushed or unfinished when they recorded. The song was predicated on the metaphor that a woman is like a holiday – anticipated, enjoyed, and remembered.

The Bee Gees had definitely arrived with their debut international hit album in 1967, which had been released into a market that was rife with quality competition – Sergeant Pepper’s Lonely Hearts Club Band (Beatles), Disraeli Gears (Cream), Are You Experienced (Jimi Hendrix Experience), The Piper At The Gates of Dawn (Pink Floyd), John Wesley Harding (Bob Dylan), Surrealistic Pillow (Jefferson Airplane), The Doors (Doors), to name but a few.

The Bee Gees 1st album was an international hit and attracted favorable reviews, charting #10 in Aust, #8 in UK, #7 USA and top ten in France, West Germany and Norway; they would soon launch themselves on the giant US market and their next single, Massachsetts, would confirm their popularity there. In 1967 the Bee Gees output was prodigious, they released no less than four international hit records in the seven months between May – December 1967 – New York Mining Disaster 1941, To Love Somebody, Massachussetts and World, at this time Barry was 21, and the twins only 18 years old.