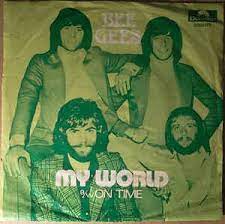 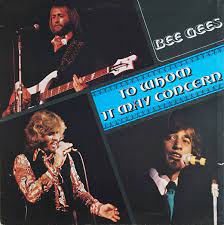 The Bee Gees had re-united and recruited a new drummer, Geoff Bridgford and lead guitarist Alan Kendall, they were between albums having released the moderately successful Trafalgar in 1971 and were due to issue To Whom It May Concern in October 1972. This album would mark the end of an era for the brothers, as it would be the last to be produced at the IBC Studios in London,. and the last time that conductor/arranger Bill Shepherd, who had guided the Bee Gees recording sessions since 1967, would be involved.

The creation of the lead single My World was unusual in that it was not an album track originally, although it subsequentrly appeared on a Best of Bee Gees compilation in 1973. The song was written backstage in Birmingham, at a performance of ITV’s game show The Golden Shot, and bears a striking similarity to How Can You Mend A Broken Heart, a hit for the band the year before. 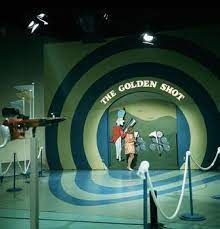 The Bee Gees had become famous for their melancholic and soulful ballads, wrapped in shimmering orchestral arrangements and replete with clever brotherly harmonies, that could only be matched by the Beach Boys, the Everly Brothers and possibly the Hollies, the template for success had been cast and the album To Whom It May Concern did not stray too far from that proven formula. 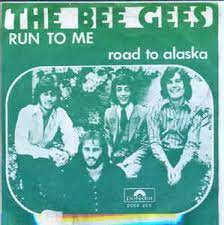 The first and most successful single lifted from the album was Run To Me , a haunting love ballad composed when the brothers were staying at Robert Stigwood’s home in Beverly Hills, lyrically it chronicled the anguish of a man who longs to be noticed by a broken-hearted girl – “If ever you’ve got pain, in your heart/ someone has hurt you and torn you apart/ Am I unwise to open up your eyes to love me…”

Veteran session drummer Clem Cattini had replaced Geoff Bridgford and Barry and Robin shared lead vocals, the song took the band back into the top 10 in the UK, and was also top 10 in Australia and throughout Europe and parts of South America and Asia, but surprisingly failed to climb above #16 in the US.

Run To Me would be the Bee Gees last major hit single for several years as musical tastes changed and the band’s ballads and soft rock pocket symphonies, failed to impress, they may have thought that their era of success was over as their next two albums also stiffed – Life In A Tin Can and Mr. Natural were criticised for lacking innovation and being outdated, another album, A Kick In The Head was so bad it was never released. 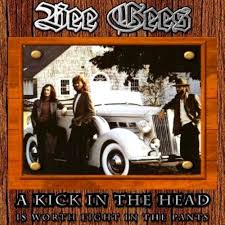 By 1974 the Bee Gees were playing second-rate supper club shows at James Corrigan’s Batley’s Variety club in Leeds, the Golden Garter in Wythenshaw, and the Fiesta Club in Sheffield, their popularity was such that an upcoming show at Batley’s in Liverpool was cancelled due to poor ticket sales, they were no longer writing songs, their creative inspiration had dimmed, they had drifted into the pop wilderness, and needed to regroup. The one positive to arise from their humiliating experience working the northern supper club circuit was that Maurice met and fell in love with Yvonne Spencely, a waitress at a Batley’s steakhouse, and following his divorce from Lulu, they were married in October 1975 (below), they had two children, and remained together for the rest of their lives. Below Maurice and Yvonne on their wedding day. 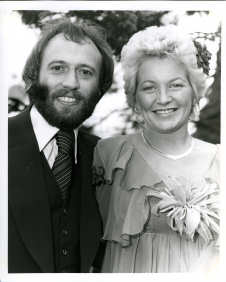 Managerially the brothers felt that Stigwood had lost interest in them, his sprawling Robert Stigwood Organisation (RSO) had become much more than just the home of the Bee Gees, he was engrossed with his new rock sensation Eric Clapton, now recording as Derek and the Dominoes, and development of his film version of Rice-Weber’s stage production of Jesus Christ Superstar. 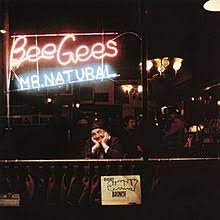 1974’s Mr. Natural was the first Bee Gees album produced by Atlantic Records guru Arif Mardin, who would become an important creative influence on the band in the future, it was also the first time that Denis Bryon (Amen Corner) drummed for the group after replacing Geoff Bridgford, Bryon would also bring fellow Welshman and multi-instrumentalist Blue Weaver into the band in the future, and both of these musicians would become stalwarts of the Bee Gees inner circle. 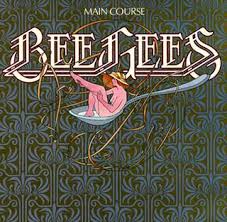 The first signs of Mardin’s influence was evident on the Bee Gees eleventh international album – Main Course – which was produced primarily at the Criteria Studios in Miami, Florida, and for the first time the famous Bee Gees disco dance sound emerged and several hit singles resulted – Jive Talkin’ and Nights On Broadway, which not only revealed Barry’s powerful and resonant falsetto voice for the first time, but also displayed a more funky dancefloor set of grooves not previously associated with the Bee Gees. 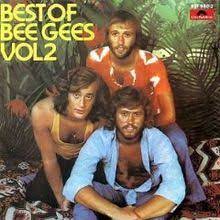 But the band were still unsure about the future success of their new soul-inflected R&B dance sound, and immediately issued another More Greatest Hits Vol 2 album, a sure sign that the brothers still believed that their back catalogue had more merit than what they were currently producing, or might produce in the future.

Morning of My Life (originally known as In The Morning) was a song written by Barry Gibb in 1965 while the brothers were touring in Wagga Wagga (NSW) and later recorded by the Bee Gees at Ossie Byrne’s St. Clair Studio (Syd.) with Nat Kipner producing, as part of the Spicks and Specks sessions. It was included on several compilation albums such as Inception/Nostalgia (1970), and was first released by Melbourne singer Ronnie Burns as the B-side to his single Exit Stage Right, another Bee Gees-penned song in 1967. In 1969 Barry and Maurice performed an acoustic version with their sister Lesley at a BBC Two Special during Robin’s absence from the group, and re-recorded the song after he had returned for the 2 Years On album but it did not make the final cut. The song is a tender, acoustic folk song, with a Simon and Garfunkel ambience, and was included on the Best of Bee Gees Vol 2 released in 1973, and has become a fan favourite, it was also covered by such artists as Esther and Abi Ofarim, Nina Simone, Mary Hopkin and Andy Gibb.