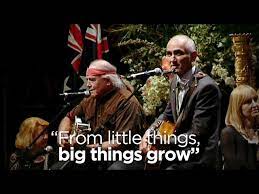 The date on which the indigenous land rights movement began in Australia is that day in August 1966 when Vincent Lingiari declared that the Gurrindji people employed at the Wave Hill cattle station at Wattie Creek were walking off the job, not in protest at their abysmal wages or their squalid conditions of service, but because they wanted their land back. 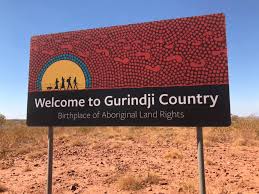 “Gurrindji were working for nothing but rations/ Where once they had gathered the wealth of the land/ Daily the oppression got tighter and tighter/ Gurrindji decided they must make a stand.”

The entire Gurrindji community left the cattle station, the leaseholders were the British Vestey company who quickly offered a pay rise in hope of resolving the matter, but the Gurrindjis, as the traditional owners of the land, were not interested in being placated, they were fighting for recognition as the traditional owners of the very land on which the Vestey empire, all 13,500 sq. klms. (or 5,212 sq.miles) was founded in the Northern Territory. 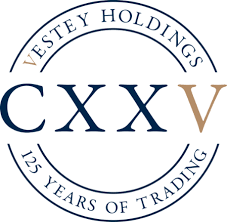 The Gurrindji land rights movement gathered momentum, Lingiari and his fellow spokesman Billy Bunter Jampijinpa toured the eastern states, public interest fed into enthusiasm for the 1967 constitutional alteration which empowered the federal government to enact laws concerning indigenous Australians, which until that time had been a State responsibility. 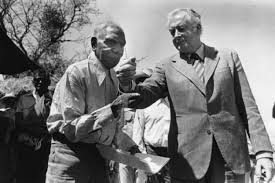 The return of a Whitlam Labor Government in 1972 put land rights firmly on the parliamentary agenda, consequently a portion of the Wave Hill property was returned to the Gurrindji people in a ceremony involving PM Gough Whitlam and Lingiari on August 16 1975 “Eight years went by, eight long years of waiting/ Till one day a tall stranger appeared in the land/ And he came with lawyers and he came with great ceremony/ And through Vincent’s fingers poured a handful of sand.” This historical moment was captured in a photo by Mervyn Bishop at the time.(above) 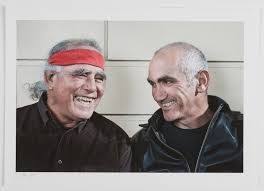 Paul Kelly has almost certainly co-written with more songwriters in Australia than anyone else, in addition to Kevin Carmody he has also been drawn to work with indigenous artists such as Yothu Yindi, Archie Roach, Ruby Hunter and Christine Anu. But he is not always a politically-minded singer-songwriter, his music examines human relations, not over-arching political or legislative structures, his songs are not protest anthems, but with this song he got very close to distilling the essence of the Aboriginal Land Rights movement, in one memorable understated sentiment.

Kev Carmody, Paul Kelly and his ten-year-old son Declan were on a camping trip in 1991 at Lake Wivenhoe in south-east Queensland, Carmody supplied guitars, banjo, and mandolin, and the two musicians started jamming around the campfire. Carmody developed the basic chord progression first on mandolin and then banjo, and Kelly the lyrics which relate the story of Vincent Lingairi, the Gurrindji people and their fight for indigenous land rights.

From Little Things Big Things Grow is a protest song which has its roots in the American civil rights movement and associated traditional folk songs, Kelly’s harmonica is Dylan-esque, and he has conceded that the melody was borrowed from The Lonesome Death of Hattie Carrol by Bob Dylan and that the opening line of the song was reworked from Dylan’s The Times They Are A-Changin’ “Gather round people, let me tell you a story…”, The title of the song was inspired by the Temptations It’s Growing and  Bruce Springsteen’s From Small Things(Big Things One Day Come), (Paul Kelly – Stuart Coupe 2020) 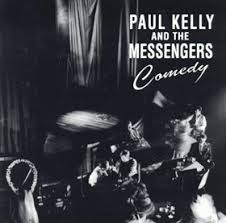 Like many great protest songs, the chord progression is straightforward but there are eleven verses which relate the rich detail of the birth of the indigenous land rights movement. Kelly recorded his version in 1991 at the Trafalgar Studios (Sydney) for inclusion on his album Comedy which featured Ernie Dingo on didgeridoo, Ian Simpson (banjo), Kelly (harmonica) and additional harmony vocals from Maread, Shelagh and Deidre Hannan. Carmody could not record the song straight away as Vincent Lingiari had passed away in 1988 and under buramaji, the aboriginal grieving rituals, he had to wait two years out of respect for him, before he could record a song in which Lingiari’s name appeared. Carmody duetted the song with Kelly and the Aboriginal female singing trio Tiddas, on his album Bloodlines in 1993, but neither version charted as singles. 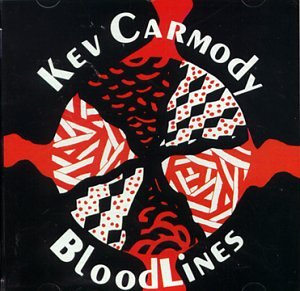 A more anthemic version of the song by the GetUp Mob was released in 2008 following a performance at a Live Earth concert a year earlier, by a group comprising Carmody, Kelly, John Butler, and Missy Higgins. 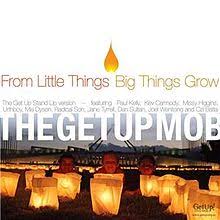 These artists contributed to the new recording along with Mia Dyson, Urthboy, Radical Son, Dan Sultan, Jane Tyrrell and others, the recorded version also featured elements of key speeches by Kevin Rudd and Paul Keating and charted #25 nationally.

The song has become a real earworm as it is used to advertise industry superannuation funds complete with the “nest egg” hand gesture, but the power of the song should not be marked by commercials or chart positions, but by the universality of its message “That was the story of Vincent Lingiari/ But this is the story of something much more/ How power and privilege cannot move a people/ Who know where they stand, and stand in the law.” 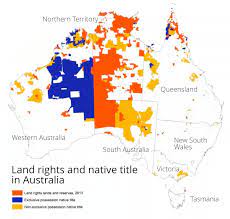 Carmody and Kelly were both inducted into the ARIA Hall of Fame, Paul in 1997 and Kev in 2009, and they performed a moving acoustic duet of this song at a memorial service for Gough Whitlam in 2014 at the Sydney Town Hall, which is the clip featured here. 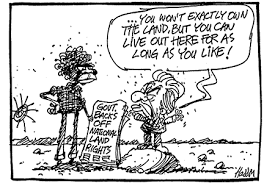