The 1970’s had been highly charged times for the band, keyboardist Paul Hewson had emerged as a talented and highly creative songwriter, Marc Hunter rivalled the best front men in Australian rock at the time, and their albums Running Free and O Zambesi were top ten hits along with a slew of successful singles.

But by the late 70’s the group was in disequilibrium, several band members had been injured in a car accident, drummer Neil Story had died of a drug overdose in 1975, and the band would be mentioned in witness statements to the Royal Commission of Inquiry into Drug Trafficking (1981-83). The relationship between band members Marc Hunter and Paul Hewson and Greg Ollard of the Mr. Asia Drug syndicate were of real concern. Illegal drugs were big business and the Mr. Asia Drug Syndicate had its roots firmly planted back in New Zealand, the so-called “Mr Asia” was Marty Johnson, a former menswear salesman from Auckland, and his partner in crime, the self-styled “Mr Big” of the syndicate Terry Clark (below), had done time in prison in Wellington. 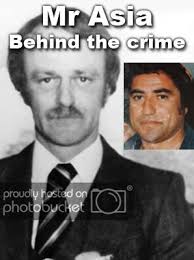 Clarke and Johnson were extremely dangerous company to keep, and one of their gang, Greg Ollard was close to Dragon’s NZ manager Graeme Nesbitt, and had actually lived with the band for some time after they relocated to Australia. These Kiwi drug-runners were ruthless, murderous miscreants, as anti-drugs campaigner Donald Mackay would discover, when he was murdered in Griffith in 1977, after which his body disappeared, and has never been found. Terry Clark fell out with Greg Ollard and had him and his partner murdered in 1977, Ollard’s body was not discovered until 5 years later in Ku-ring-gai Chase National Park (Syd). Drug couriers Donald and Isabel Wilson were murdered in 1979 and turned up in a shallow grave at Rye (Vic), Clark even had his partner in crime Marty Johnson murdered in the UK in 1979, and his body dumped in the Delph Quarry near Chorley. These were perilous times and Dragon band members were associating with criminals who would kill anyone they thought were a threat to their billion-dollar illegal drug empire. Terry Clark himself was convicted in the UK for the murder of Johnson and died there in prison in 1983. Below – top left mug shots of Clark, below left Johnson’s body being retrieved from the UK quarry, and right Marty Johnson.

Both Marc Hunter and Paul Hewson were drug-dependent, the band had just completed a disastrous tour of the USA supporting the Johnny Winter Band, Marc’s professional performances had been erratic, his voice was badly affected by overuse and drugs, at the Dallas concert he had abused the admittedly unruly audience, calling them “faggots”, and provoked a predictably violent response, which effectively sank their US careers before they even started. Marc was deemed to be so unreliable by fellow band members that he was fired in 1979.

The band limped on with replacements but ultimately disbanded in 1980, Marc went off to rehab and ultimately returned to front a reformed classic Dragon line up in 1982 comprising, the Hunter brothers Marc (vocals) and Todd (bass), Paul Hewson (keyboards), Rob Taylor (guitar) and Kerry Jacobsen (drums), there were debts to pay and the fans wanted Dragon with Marc Hunter up front, back and touring again.

Marc Hunter’s return sparked a creative resurgence, he wrote Rain in company with brother Todd and Todd’s partner Johanna Piggott and the record was produced by American Alan Mansfield, then-partner of Sharon O’Neill, the Kiwi music mafia were back in business.

Todd had started writing the instrumental portion of Rain at his home in Bondi when his domestic partner, Johanna PIggott jokingly sang, “It’s raining, it’s pouring…” from the children’s nursery rhyme over the top of it. This provided the lyrical focus for the work. Pigott recalled, “it was written before Dragon even reformed. I didn’t think it’d be a hit, but Todd always thinks all his songs are hits.”

Producer Mansfield had worked with Marc on his solo material and was invited to work with Dragon, at the first recording session, Jacobson, their drummer had a headache and took some over-the-counter medication, but before he left the session he laid down a bed of overdubs that could be added to a third take, leaving Marc, Todd, and Johanna Piggott to finish the lyrics.

Mansfield recorded Hewson’s “low, menacing synthesiser parts,” and also provided his own keyboards, guitar and backing vocals. Upon hearing their work, after the first day’s sessions, and recognising the musical contribution their producer had made, the Hunter brothers told Mansfield, “If this song doesn’t make it to number one, you’ll have to join the band.”

The slick synth-pop of Rain epitomised the 80’s sound and re-captured all the early spirit, swagger and cockiness of the band in their pomp, it was the first single released from their album Body and the Beat (#5 June ’84) and they took Rain to #2 nationally, and #88 in the US. Following the release of the record but before all the promo videos were shot, Hewson and Jacobsen were respectively replaced by Alan Mansfield and Terry Chambers, tragically Paul Hewson would die of a drug overdose two years later in 1985, Marc Hunter would ultimately succumb to throat cancer in 1998. 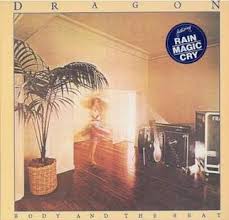 Three music videos were filmed for the track – in the first, Marc’s infant son appears below Hewson’s keyboards, for its United States release their label, PolyGram International, made a second version with the new band members, Chambers and Mansfield, appearing – the group disapproved of its “post-apocalyptic scenario” and a third one was commissioned, and this version also has Chambers and Mansfield as band members. 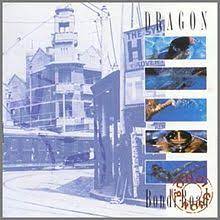 Young Years was the second single lifted from their ninth album, Bondi Road, and was co-composed by NZ singer Sharon O’Neill and her partner Alan Mansfield, it was a reflection on a life lived, looking back in one’s autumnal years, at defining moments and friends lost along the way. This was the last hit for Dragon and Marc Hunter and the last record by the Hunter brothers Mark and Todd, the lyrics gained added poignancy following Marc’s death in 1998.

Young Years charted at #18 nationally, Todd Hunter would take nearly a decade to recover from the loss of his young brother but in 2006, former Kiwi Mark Williams, who had a top ten hit with Show No Mercy in 1990, was recruited to front the newly reformed Dragon. Dragon were inducted into the ARIA Rock and Roll Hall of Fame in 2008, along with Max Merritt, Russell Morris and the Triffids, and the NZ Music Hall of Fame in 2011.