Originally a Sydney surf instrumental outfit with punk leanings named Sekret Sekret, Cruel Sea (named after a 1960’s surf song by the Ventures) were originally Dan Rumour (guitar), James Cruickshank (guitar and keyboards), Ken Gormley (bass) and Jim Elliott (drums), and they were regulars at the Grand Hotel (Syd). But the catalyst for their future success would prove to be the addition of ex-Beasts of Boubon front-man and sometime lighting technician Tex Perkins, who joined the band in 1989. Below L-R – Perkins, Gormley, Rumour, Elliott, Cruickshank. 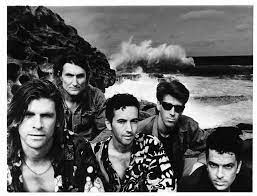 In Perkins the band recruited a charismatic front-man, whose rich seductive bass baritone vocals recalled the swamp rock spirit of Tony Joe White (Polk Salad Annie), and he imbued the narratives of the band’s songs with appropriate drama and gravitas and also brought lyrical songwriting skills to the mix which would enhance the rhythms of Dan Rumour.

The band’s live performances were widely acclaimed and after returning from a European tour in support of Nick Cave they went into recording studios in Melbourne (Atlantis and Metropolis) and Perth (Planet) with producer Tony Cohen (Nick Cave and the Bad Seeds, Dave Graney, Ferrets, TISM, Supernaut) and Mick Harvey (The Bad Seeds) to record their third album The Honeymoon Is Over in 1992-3.

The album was a gumbo of swampy, Cajun-inflected, organic, rootsy rhythms, and sprinkled between the five instrumental tracks, were powerful lyrical images delivered in the trademark growl/rap of Tex Perkins. The band wore their musical influences on their sleeves, the two cover songs were Tony Joe White’s Woman with Soul and Blame it On the Moon by Gene Thomas, the first single lifted off the album was Black Stick whose release pre-dated the album by several months. It reflected the killer riffs and fluid rhythms of Booker T and the MGs, the Cajun soul of the Neville Brothers and the bourbon-soaked rasp of Tom Waits, this was music that eschewed grunge and took the listener in another direction, towards hard-edged T-Bone Burnett-tinged western rock and roll.

The lyrics conjure powerful imagery as human organs become metaphors for the environment around us, “My heart is a muscle and it pumps blood/ Like a big old black steam train/ My veins are the tracks/ And the city is my brain …” and the metaphors kept coming in Perkins whisky bass baritone, his legs are skyscrapers, arms are weapons, stomach the ocean until he declares rather menacingly at the end of the song “I could be your whole world.” Jim Elliott and Ken Gormley on drums and bass respectively laid down a swampy bed of rhythm over which Rumour and Cruickshank’s acoustic and electric guitar riffs persisted, it was an under-appreciated funky slice of swamp rock which charted at #25.

The second single lifted from the album was the title track The Honeymoon Is Over, Perkins shifts up a gear and the wryly laconic front-man of Black Stick now unleashes his fury at the former object of his affections who is being sent packing “The Honeymoon is Over …/ I‘m gonna send you back to wherever/ The hell it was you came/ And then I’m gonna get this tattoo/ Changed to another girl’s name.”

The line was inspired by a person that Perkins had met who experienced this dilemma and had to edit his body art, he has also revealed that his lyrics are often inspired by the music of others, so Dan Rumour songs that would often start out as Cruel Sea instrumentals would be imbued with a different persona once Perkins had added the lyrics.

Acoustic and electric guitars and a tight rhythm section deliver the goods again, Perkins vocals embodied all the swagger and testosterone of a charismatic front-man, the song charted at #43 and took out the ARIA Award for Single of the Year and ARIA Award for Best Album of 1994, it was a substantial hit charting at #4, selling 150,000 copies and occupying the charts for 67 weeks! Sadly guitarist James Cruickshank contracted bowel cancer, and passed away in 2014, at the age of 53. Below James Cruickshank.