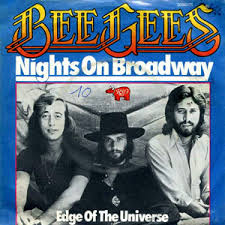 The Bee Gees were emerging from a slump after the period 1972-75, but with the release of the albums Main Course and Children of The World they revived their chart fortunes, the singles Jive Talkin’ and then the second song lifted from Main Course, Nights on Broadway, confirmed their upward trajectory, Barry and Robin performed lead vocals, and Maurice provided memorable falsetto vocal backing, which took the song to a solid #7 in the USA, #2 in Canada and #8 in the Netherlands (#67 locally).

Producer Arif Mardin was encouraging the Gibbs to jettison their slow ballads for songs that were more uplifting, funky and risky, the evolution of the song Nights on Broadway, epitomized how the brothers were having to adapt and experiment with their voices. Mardin asked Barry if he could scream an ad lib during the chorus to the song to raise the excitement levels, Barry replied that he could scream in certain circumstances, and Mardin asked “Can you scream in tune” to which Barry replied, “Well I’ll try.” As he screamed at an ever- higher pitch, he discovered his powerful falsetto which had laid dormant until then, modestly Mardin summed up his masterstroke of finding Barry’s falsetto as simply asking him “can you take it up an octave?” Mardin also suggested that the brothers should “adult” up the title of this song from Lights on Broadway to Nights…, and they did.

Nights on Broadway was a breakthrough R&B hit for the brothers and after it featured Barry’s falsetto for the first time, it became his preferred vocal style, and he felt that it was his most expressive.  But it did flag the beginning of what are sometimes referred to by critics as the “helium years” for the band between 1976-1980, and it increasingly relegated Robin to backing vocal status, despite his splendid and soulful vibrato.

Up to that time, the only falsetto vocals on Bee Gee songs had been provided by Maurice, Barry’s falsetto ad lib “blamin’ it all …” became a new and exciting dimension on the record and future albums. Fanny (Be Tender with My Love), a song supposedly inspired by their housekeeper at 461 Ocean Boulevard (Miami, Fla.), was their next Australian single. But it was a misfire here only reaching #61 although it was a melodic and tender ballad and probably superior to their next release, You Should Be Dancing, which took the brothers back into the top 20 locally, and was a big hit in the USA.

As Robert Stigwood had ended their contract with Atlantic Records, the brothers could no longer work with Arif Mardin, so they teamed up with Mardin stalwarts engineer Karl Richardson and arranger Albhy Galuten in the same Criteria Studio in Miami where they had previously worked with Mardin, to create Children of the World, their twelfth international album. Barry Gibb used his powerful and sustained falsetto and provided lead vocals on You Should Be Dancing, unaccompanied by Robin. Below L-R Richardson, Galuten, Barry Gibb

The song is unashamedly about singing disco songs in very high voices, hitting the dancefloor under the mirror ball in polyester body shirts, flares, and platform shoes, and grooving. It wasn’t one of the brothers most artful creations, lyrically it was repetitive, although Barry’s falsetto scat singing inserts were catchy, Maurice contributed the bass line and Blue Weaver the synthesizer parts, and it certainly ticked all the boxes across the pop, dance. disco and R&B genres.

In the movie Saturday Night Fever, it brilliantly accompanied Travolta’s solo dance floor number (see clip below), and melodically it was propulsively pop perfect. Stephen Stills who with Neil Young was recording the album Long May You Run at Criteria, contributed percussion to the track along with two other members of their band, Joe Lala and George Perry, the Americans loved it, and it climbed to #1 in the US and sold over two million copies worldwide

Other hits lifted from Children of the World included the million-seller Love So Right (#3 in the US), Boogie Child (#12 in the US) and Love Me, a US #14 hit for Yvonne Elliman. 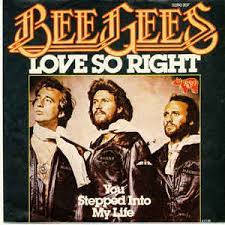 In 1978 the Bee Gees would star in their own film which would be released before Saturday Night Fever, a Stigwood-produced version of the Beatles Sgt. Pepper’s Lonely Hearts Club Band, starring the brothers, along with Peter Frampton, Billy Preston, Steve Martin, Donald Pleasance, Frankie Howerd and the bands KISS, Aerosmith, Alice Cooper, Earth, Wind and Fire and as narrator, the cigar-chomping George Burns. It was an ill-conceived, unmitigated disaster, the plot, screenplay, acting, and direction, were scathingly reviewed by the critics, it stopped the Bee Gees movie career dead in its tracks. Below L-R on the set of Sgt. Peppers Barry, Robin, Peter Frampton, Maurice.

Their reputations would fortunately be salvaged when the soundtrack for Saturday Night Fever exploded internationally, the Bee Gees would ride the crest of a huge wave of success in the USA throughout 1977-79 hitting #1 no less than six times, as disco fever ruled the airwaves