The Bee Gees were now reinventing themselves under the guidance of Atlantic Records producer Arif Mardin at the Criteria Studios, Golden Beach, in Miami, Florida. This was where fellow Stigwood stablemate Eric Clapton had recorded his comeback album 461 Ocean Boulevarde, with producer Tom Dowd, and Clapton recommended Criteria to the Gibb brothers as the place to re-discover their mojo and possibly re-invent their music, by absorbing the rhythms and melodies of other performers. Mardin encouraged the brothers to broaden their vocal range, embrace rhythm and blues and listen to other contemporary artists such as Stevie Wonder, the O’Jays and the Stylistics. Below at Criteria Studios the Bee Gees with studio owner Mark Emerman. 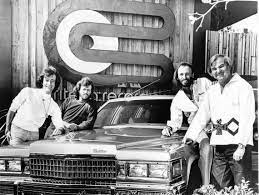 The Gibbs were acknowledged as world class balladeers, and they were about to discover a funkier, more soulful groove that would shape and re-define their future musical destiny, Arif Mardin (below) their producer virtually personified the soul/blue-eyed soul genre in the US, his production credits were stunning – Aretha Franklin, Dusty Springfield, Roberta Flack, Chaka Khan, the Young Rascals, David Bowie, Barbra Streisand, Hall and Oates and many others.

He would move the Bee Gees onto a rhythm and blues “main course” that they would follow, as they re-invented their sound, and the Bee Gees would return to the Criteria Studos for the next two decades to record their hits, and Barry and Maurice would become Miami residents. The other significant change to emerge from these sessions was an impressive and sustained falsetto from Barry, which revolutionized the Bee Gees sound. 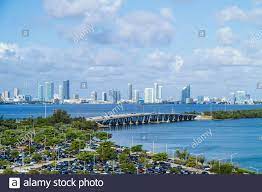 Jive Talkin’ was anchored on an early syncopated disco rhythm which the boys had invented and would use on many songs, Maurice has revealed that one of the inspirations for the funkier beat was the clickety-clack sound that their car made when it crossed over the Julia Tuttle Causeway (above) that connected Biscayne Bay to the Criteria Studios in Miami. The rhythmic sound of the cars wheels resonated through the bridge’s steel frame and en route the ever-enterprising brothers wrote a song called Drive Talkin’ which underwent a subtle name change before it became a hit record.

A notable recruit to the Gibbs creative team at the time was multi-instrumentalistist Blue Weaver, above (Amen Corner, Strawbs, Mott The Hoople) who would bring his beguiling, convolving, funky keyboards to their emergent sound, and in association with Maurice, and drawing inspiration from Stevie Wonder’s synth bass lines on Superstition and Living for the City, complete the re-invention of the Bee Gees sound. Jive Talkin’ emerged as a new dance anthem, named after the black colloquialism for lying or boasting, two years later it would re-emerge on the era-defining Saturday Night Fever soundtrack, and revive the fortunes of the Bee Gees in way they could never have contemplated.

Jive Talkin’ certainly reflected the sounds of the golden era of funky, soulful black music of the early to mid-70’s and not just the highly influential songs of Stevie Wonder from Tamla Motown, but also the Stylistics (You’ll Never To Get to Heaven/ I’m Stone In Love With You), the O’Jays (Backstabbers/Love Train), Earth , Wind and Fire ( Shining Star/Sing A Song), and Kool and the Gang (Jungle Boogie/Hollywood Swinging), and when culled from the Main Course album it went to #1 in the USA, #5 in the UK, and #14 locally, and sold over 1.5 million copies globally.