Andrew Roy Gibb was born in March 1958, he was the youngest of the Gibb brothers and physically resembled his eldest brother Barry, although at 1.73 m he was shorter than Barry (1.80m), he was only five months old when the family emigrated to Australia, arriving in Brisbane (Qld) in August 1958.

He always regarded himself as a Bee Gees understudy, and prepared himself to be summoned on high; like his older brothers, Andy was a poor student, and instinctively believed that his future was as a singer, and that his big brother Barry would be his mentor. He lived with his parents in the Spanish resort town of Ibiza for several years between 1971-73, performing in local clubs and taverns, and enjoying the attention of young female Swedish, Dutch and German tourists, no fifteen- year-old ever had it so good. Below – Andy’s first band Melody Fayre.

At sixteen he formed his first band, Melody Fayre (inspired by a Bee Gees song Melody Fair, on their Odessa album, and chosen by his mother Barbara), Barbara became their manager, and they gigged at the Peveril Hotel on Loch Promenade on the Isle of Man where his parents had relocated and were running the local post office. Their early sets included covers of Bee Gees, Neil Diamond, and Paul Anka songs, Melody Fayre was no cutting- edge young rock band, they started out in the middle of the road, musically speaking, and would stay there.

In 1974, at the suggestion of his brothers, Andy returned to live in Australia, where his older sister Lesley still lived. The Gibbs knew that that this would be a good place for Andy to complete his musical apprenticeship, his sister was there to provide family support and the Jacobsens, Col (Joye) and Keith, via their local recording label ATA, would provide the necessary professional support, as they had done for the three young Gibb brothers back in the 1960’s.

In 1974 Andy made his first recordings with ATA, but no singles were released, and his backing band returned to the Isle of Man, leaving Andy to get on with his solo career in Sydney. He gigged with his new group Zenta (above), playing the Sydney circuit of shopping centres and clubs, and also landed a support slot on a Bay City Rollers/Sweet tour of Australia in 1975.

His first single, the ballad Words and Music was hyped by Molly Meldrum on Countdown, as a record you should “do yourself a favor, and go out and buy”, which charted at #78 locally in October 1975. Eight months later the 18-year-old Andy, like his big brother Barry, would marry an Aussie girl, Kim Reeder. Her father was a bricklayer and her mother a factory machinist, they were solid blue collar working class, and Andy was welcomed into their family circle. Below – Andy and Kim on their wedding day at the Wayside Chapel (Syd)

The young couple honeymooned at Robert Stigwood’s Bahamas “beach shack”, later that year he was signed to a recording contract with Stigwood and RSO and summoned to join his brothers at the Criteria Studio in Florida, to cut his debut album – Flowing Rivers. Zenta band members found out indirectly that they had been disbanded, clearly a young Andy was showing signs of being as driven and ruthless as his big brother Barry.

At this time the Bee Gees were resurgent, the dismal days of performing at poorly attended supper club venues in the north of England were now a distant memory, the album Main Course and their brilliant collaboration with Arif Mardin, put the band back on top, by 1977 the release of the Saturday Night Fever movie soundtrack, would confirm their global superstar status. By the time Andy shifted to the States in 1976, teen idols were back in favor, his brothers were dominating world charts again, and the stars were certainly aligning for Andy, who would soon become the new golden boy of pop, and chart-wise put his teen idol predecessors – David Cassidy, Bobby Sherman, Rick Springfield, and Donny Osmond – in the shade. 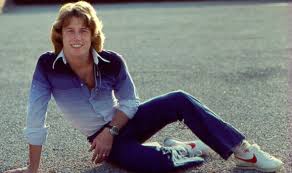 The influence of the Bee Gees on Flowing Rivers was obvious, Barry had written the two songs that would become hits when released as singles –I Just Want to Be Your Everything and (Love Is) Thicker Than Water– and he provided background and harmony vocals on both tracks, the Bee Gees arranger and engineer, Albhy Galuten and Karl Richardson respectively, co-produced the sessions.

The Bee Gees influence ensured that only the best musicians played on the record, this included Eagles guitarist Joe Walsh, who just happened to be recording Hotel California in the same studios and played on both the hit singles released from the album.

Andy had written the other eight album tracks when he was in Australia, several had a vaguely country- rock/soft rock ambience, the title track Flowing Rivers showed promise and several ballads including Words and Music, Too Many Looks in Your Eyes, and Starlight, indicated where a more independent Andy may have taken his music, but they were treated as inconsequential album fillers. Barry did not believe that Andy could do at nineteen what his three brothers had already done at eighteen, and this fueled his self-doubts and insecurity, and fed into a gnawing lack of self-esteem, and mounting depression, which haunted Andy throughout his life.

Meanwhile his father Hugh was also taking credit for Andy’s early success in an interview with Circus magazine. “I’m not all that surprised… I taught Andy and the Bee Gees their stage techniques: how to walk on, smile, bow, dress…and I arrange Andy’s stage program and lighting…once he walks out there, he almost never stops moving… the sweat pours out, he shakes his head and sprays the first four rows.” It was generally agreed that what Hugh taught his sons was how to fake emotion, to preserve a protective outer appearance of artificiality, behind fixed facial expressions, robotic movements, and soulless stagecraft. Hugh never got close to anything like the stardom that his sons achieved, he was a ne’er do well drummer in a north England dance band, but with his hairpiece firmly in place, and a toothy Gibb smile, he vicariously went along for the ride, occasionally big-noting, and taking his parental percentage share of their earnings.

I Just Want To Be Your Everything was a dramatic love song filled with all the hooks, tropes and cadences that were so typical of Barry Gibb compositions. Andy, who was only 19 at the time, has revealed that he was in awe of his older brother’s creative genius, and intimidated by the fact that Barry wrote the song in about twenty minutes and then when straight on to write (Love Is) Thicker Than Water – two US #1 hits in about one hour.

A benevolent big brother did give Andy a co-credit on the latter song, for suggesting part of the title – “thicker than water”, it was a popular midtempo song with several subtle tempo changes, segueing from a lush romantic ballad which suited Andy’s soft vocals, to a more up tempo melodic instrumental arrangement, with catchy hooks, and Bee Gees-style harmonies.

The global chart domination by the Bee Gees in 1978 remains unequalled to this day, Stayin’ Alive topped the US Hot 100 in March 1978, until it was displaced by Andy Gibb’s (Love Is) Thicker Than Water, which was in turn displaced by the Bee Gees Night Fever, which was displaced eight weeks later by another Bee Gees song, Yvonne Elliman’s If I Can’t Have You, Barry Gibb had just written four consecutive US #1 songs, a feat unmatched to this day. At the same time another Barry Gibb song, Samantha Sang’s Emotion was sitting at #3 on the charts, blocked from the top spot by a Gibb logjam, at that time in March the entire US top 5 were all written/performed by the Gibbs, a feat of chart domination that had only previously been equaled by the Beatles back in April 1964.