Andy’s follow up single to Everlasting Love, and the third single lifted off the Shadow Dancing album, was a song credited to Barry Gibb and the group’s keyboardist Blue Weaver, (Our Love) Don’t Throw It All Away. It was a melancholy ballad with soaring strings and a prominent Fender Rhodes keyboard accompaniment, which was designed to really showcase Andy’s vocal skills, but he struggled, and at times sounded like a poor Barry Gibb impersonator, the song crept onto the US charts at #9. About the recording of this song Blue Weaver recalled “When Andy actually went to record it, Barry listened to it [the original Bee Gees version from 1977] again and thought, ‘Oh, it’s not finished’, so Barry wrote the whole of the middle-eight right there”.

Professionally Andy was still giving the impression that he was peaking despite his toxic lifestyle, appearances on NBC’s Special Olivia! with expat Aussie Olivia Newton-John and ABBA, as well as a Yuletide guest spot on Bob Hope’s All- Star Christmas Special, apparently cemented Andy’s position in the superstar firmament, but by the early 80’s the cracks were beginning to appear.

Andy’s last studio album would be 1980’s After Dark, it was a Barry Gibb project propping up Andy’s career and fulfilling his contractual obligations to RSO. By this time Andy’s drug use had spiraled out of control, his voice was in bad shape, he was barely writing songs, and he could not be counted on to appear for recording sessions. Barry created new songs, found old ones, and sang vocal tracks, he could also do good impressions of Andy’s voice, and much of what sounds like Andy is in fact Barry, filling in lines or phrases Andy missed or sang off-key. Barry was now Andy’s songwriter, backing singer, producer, and sometime-ventriloquist, After Dark has been re-defined as a Barry Gibb concept of an Andy Gibb album.

Desire was the first single lifted off the album, it was originally a Bee Gees song recorded in 1978 in the sessions for the Spirits Having Flown album, and sounded very much like Too Much Heaven, but it was ultimately cut from that album. Andy’s version climbed to #4 in the US for his last top 5 hit in February 1983, in the promo clip the former boyishly handsome golden boy of pop, with the gleaming teeth, sparkling blue eyes, impressive helmet of feathered blonde hair, looked sick, emaciated, his hair was lank, and his voice sounded strained, when it was possible to distinguish between Barry’s backing vocals, and Andy’s thin falsetto.

The last single lifted off the album was I Can’t Help It, one of two duets on the album that Andy performed with Olivia Newton-John, Rest Your Love On Me was the other, a duet that the two had previously performed on a UNICEF show in January of 1980, I Can’t Help It climbed to #12 in the US in April 1980.

Andy’s professional career was disintegrating in a blizzard of cocaine and alcohol, he was dropped from a production of Gilbert and Sullivan’s Pirates of Penzance as soon as it began its LA season in 1982, while consistent absences from the taping of Solid Gold shows due to his drug binges, saw him sacked after one season as co-host. Later in 1982 he was hired for the lead role in the Broadway production of Joseph and the Amazing Technicolor Dream Coat, but he began to skip rehearsals, and struggled with the role, he had no formal voice training and could not project his drug-affected voice as required in a theatre production, so he was fired from the cast after six weeks.

Robert Stigwood refused to renew Andy’s contract with RSO, his brothers were fighting with Stiggy over outstanding sales revenue and royalties, Andy was now effectively unemployed, and he had sold many of his personal possessions to buy drugs. He failed to front for a Bob Hope Special, and was replaced by Pat Boone, in 1984 he was found unconscious in a New York hotel room, and hospitalized.

In April 1985 he checked into the Betty Ford Clinic at Rancho Mirage (Cal.) for six weeks and seemed to have turned it around, but by 1987 he was back in rehab, and was then forced to rejoin his brothers in Miami, still with a forlorn hope that he would become a Bee Gee, but the twins were totally opposed, despite Barry’s pleas. 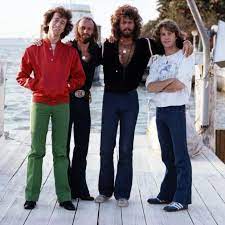 By September 1987 Andy was declared bankrupt, he had assets of only $1,432.79, the millions he had earned had been completely dissipated, a Greatest Hits Album was released which effectively signposted the end of Andy’s career, but it did produce one memorable song written by Andy, entitled Time is Time. It was a far cry from the disco-lite dance music of his past hits, full of rock and roll energy, and the vocals of a young singer genuinely connected to his music. As the song appears to end, Andy continues to sing several more words unaccompanied, the drummer then hits the high-hat cymbals, and the recording ends, bringing the curtain down, in more ways than one. 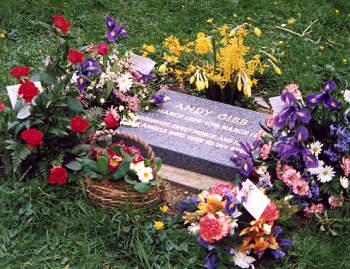 It was Andy’s last top 20 hit at #15, he would sadly pass away on March 10th,1988, of myocarditis, an infection of the heart closely linked to habitual cocaine use, and fatal cardiac inflammation, he was only thirty years old.