On October 21, 1999 Saturday Night Fever the musical opened on Broadway, it would run for over 500 performances and by opening night it had generated $20 million in advance ticket sales; critics were divided on the effectiveness of the transition of the story from film to live theatre. The imbalance between the ugliness, drug abuse, and alienation of the life of Tony Manero (Travola’s character) on the one hand and the euphoria, escapism, and life-affirming dance floor anthems of Club 2001 Odyssey on the other, seemed to leave theatre patrons conflicted and uncertain about how much they should enjoy the disco music. Could SNF be just another pleasurable jukebox musical experience, despite the bad language, drug abuse, and violence against women, the Brits seemed to think so, they warmed to it, and it ran for two years on London’s West End at the Palladium.

Buoyed by the success of their One Night Only album, in April 2001 the Bee Gees released their 22nd studio album, This Is Where I Came In, and the album’s title track was one of their smartest, catchiest, most compelling and fully realized songs in some years. In the sparse intro, Robin sings over Maurice playing acoustic guitar (a Gibson Monarch given to him by John Lennon), Barry sings a verse and all three then soar in unison, until Robin returns to sing a solo verse in full voice, the song’s hook was reminiscent of Toto’s Africa, and it does have a certain George Harrison Got My Mind Set on You/Crackerbox Palace ambience to it. But importantly this song indicated that the band was reborn, confident, prepared to continue to experiment, and importantly to reveal their humorous side, and send themselves up in the process.

The promo video for This Is Where I Came In was one of their best, it was literally a Bee Gees autobiography in about four minutes, the opening scene sees the brothers in a large bed with Barry clutching a teddy bear while Maurice strums the opening chords and Robin sings. They segue to the interior of a VW van, similar to the one they used in Australia to tour, and are joined by actor David English who plays various comedic roles – the boy’s mother, their manager, and a peeing post for the family dog. Maurice videobombs shots at will, Barry in black leather and shades, gives off a faintly mysterious hitman vibe, and Robin plaintively contributes to the Goonish goings-on and various Dad dance moves. It was great fun and sad too as this was the last music video the boys would make before Maurice’s death in 2003.Below Barry Gibb and Brian Wilson.

Other standout tracks on the album included the artful merging of Dixieland-style with a clarinet solo on Technicolor Dreams, the Kinks-influenced She Keeps On Coming, early 60’s Bee Gees pocket symphonies-style Wedding Day and Sacred Trust, and a tribute to the sound of the Beach Boys on Walking On Air, a track that Maurice was very proud of after Brian Wilson rang to congratulate him on the track. The Gibbs revered the vocal harmonies of such brotherly predecessors as the Everly Brothers and the Beach Boys when they were growing up in Australia, and Brian Wilson had already inducted the brothers into the Rock and Roll Hall of Fame back in 1997.

In 2002 Maurice sang with Lulu on her television special, he continued to participate in paintball championships (above), and moved into a new house closer to brother Barry in Miami, in 2003 he collapsed and was hospitalized with what was described as a cardiac arrested attributed to an intestinal blockage, which turned out to be an undiagnosed twisted intestine which he had from birth. Following an operation to remove part of his intestine which was gangrenous, Maurice passed away on January 12, 2003, he was 53. He had been the glue that held the Bee Gees together, not the star performer, nor the most gifted of the brothers vocally, but he was a talented multi-instrumentalist and musical arranger, who was comfortable with the emotions he conveyed in song; no melodrama or affected vocal tricks, his rich timbre imbued his beautiful voice with an effortless sincerity that was a crucial element in the brothers glorious harmonies, affectionately known as Mo, his death was deeply felt by Barry and Robin. 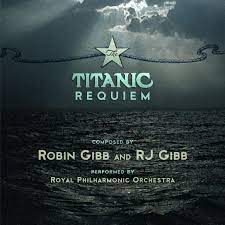 Barry and Robin would return to performing as the Bee Gees in 2009, after stating that the name would be retired at Maurice’s funeral, they appeared on Dancing with the Stars, and American Idol. Robin and his son Robin-John completed the 100th anniversary tribute work The Titanic Requiem, which was performed by the Royal Philharmonic Orchestra on April 10, 2012. On that evening Robin would be too ill to attend, he had cancer and was hospitalized with pneumonia, lapsing into a coma, he briefly rallied, but due to kidney and liver failure, he passed away on May 20, 2012, at the age of 62. Robin and Barry were the most conflicted of the brothers, and never reconciled their differences before Robin passed away, but the death of Robin, affectionately known as Bodding, would further deepen Barry’s feelings of remorse and survivor guilt. Robin was a gifted singer and lyricist, who was more introspective than his fraternal twin Maurice, he could be witty and humorous, but also shy, dark, and emotionally closed, he considered himself the lead singer of a group that already had one, his gifted, Alpha male elder brother Barry, with the matinee idol looks. Below – Mother Barbara Gibb at Robin’s funeral.

On August 28, 2016 mother Barbara Gibb passed away, she was 96, Barry’s only other sibling still alive was his elder sister Lesley, born on January 12, 1945, and still resident in Sydney (Aust). Below- Barry and sister Lesley, with Barry’s wife Lynda photobombing in the background. 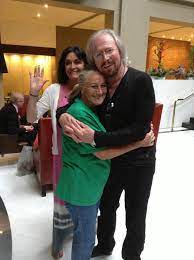 Barry has continued to perform and record solo in the time since his brothers passed away, several of his most touching songs have been tributes to his three deceased siblings. In 2016 his album In The Now featured two songs in which he continued to grieve in a public way, End of the Rainbow, and The Long Goodbye, which tenderly dealt with the lives the brothers shared, not always harmoniously nor positively, but openly and honestly, but now tinged with remorse and perhaps a sense of loneliness and melancholy, qualities which often inhabited the best Bee Gees songs. 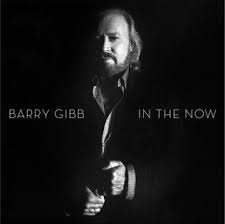 In 2017 Gibb family members collaborated on the recording of an album of re-imagined Bee Gees songs, entitled Please Don’t Turn Out the Lights, after Samantha Gibb, daughter of Maurice, initiated the formation of what became known as the Gibb Collective, comprising children of the four brothers and one other family member.

The songs on the album included such classic Bee Gees hits as I Gotta Get A Message to You, New York Mining Disaster 1941, I Can’t See Nobody, and Run To Me, and lesser known but cherished album tracks, including In The Morning, Fool For A Night, and Don’t Fall In Love. The participating family members were Robin-John and Spencer Gibb (Robin Gibb), Samantha and Adam Gibb (Maurice Gibb), Peta Gibb (Andy Gibb), Travis and Steven Gibb (Barry Gibb), and Bernice “Berry” Gibb-Rhoades (daughter of elder Gibb sister Lesley Gibb). The performance of the title song, a relatively obscure album track from 1972’s To Whom It May Concern, was recorded by the four eldest children of each of the Gibb brothers, who each sang a verse – Spencer, Steven, Peta, and Adam – and it was arguably the vocal centrepiece of the whole album. Sadly Berry Gibb-Rhoades passed away in April 2021 following a heart attack, after having a COVID-19 vaccination shot, she was 56 years old.

In 2021 Barry released Greenfields, a solo album of duets with such performers as Olivia Newton-John, Alison Kraus, Keith Urban, Sheryl Crow, Brandi Carlisle, and Jay Buchanan, predictably the album was #1 in Australia and the UK and #2 in the USA, making Barry the oldest person to ever top the ARIA charts.