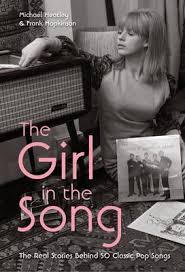 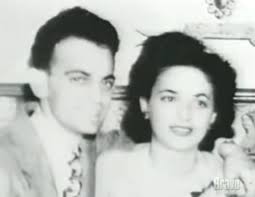 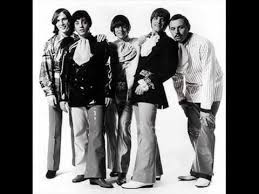 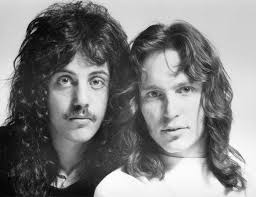 Billy Joel (1949) was born in the Bronx (NYC) and brought up in Long Island, his father, Howard (Helmut) Joel was an immigrant Jew who fled Nazi Germany, and met and married Rosalind Nyman, daughter of English immigrant Jews to NYC (Billy’s parents above left). They would divorce in 1957 and Howard returned to Germany where he re-married and had a son Alexander, a half-brother to Billy. Joel took piano lessons and subsequently dropped out of the Hicksville High School to pursue a musical career, first with the Hassles (above centre)and then with his friend and drummer Jon Small in the heavy metal duo Attila (above right). Small was married to Elizabeth Weber and they had a son, but Joel had become infatuated with Elizabeth, who he described as unlike American girls he’d known, as she wasn’t domesticated or focused on family-raising, rather she was sensuous, seductive and straight-talking. The scandalous affair with Weber split the band up and she ultimately dumped both Joel and Small, which triggered a suicidal meltdown by Joel who attempted to take his own life several times, sought treatment and the two were ultimately reconciled and married in 1973, after which she quickly moved to become his manager. Below L-R – Billy and Elizabeth Weber 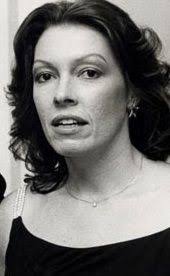 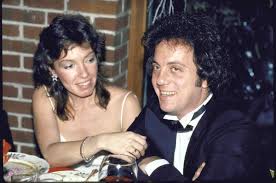 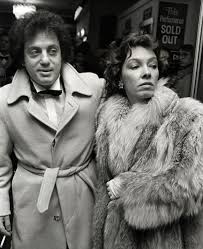 Weber was a tough and uncompromising negotiator, with a brassy demeanor who many found calculating and unfeminine, but she was very shrewd and secured profitable deals for Joel who was relatively naïve commercially. Billy was deeply in love with Elizabeth, and when he had his breakthrough hit with the album and single entitled Piano Man, Weber was the inspiration for the waitress mentioned in Joel’s classic ballad “And the waitress is practicing politics …”, written when Joel was playing at the piano bar in the Executive Room of the Wilshire Blvd. Hotel in Los Angeles. 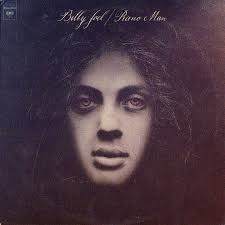 One of Joel’s earliest songs inspired by Weber was the piano ballad She’s Got a Way, which featured on his 1971 album Cold Spring Harbor, Billy was clearly mesmerized by Elizabeth’s aura and presence, and although she was not a natural beauty, there was a palpable chemistry between the two “She comes to me when I’m feelin’ down/Inspires me without a sound/She touches me and I get turned around/She’s got a smile that heals me/I don’t know why it is.”

The album Stranger released in 1977 featured several songs inspired by Elizabeth Weber, She’s Always A Woman was a tribute to the feminine qualities that Joel admired about a woman that some found mercenary and controlling “She can kill with a smile, she can wound with her eyes/And she can ruin your faith with her casual lies/And she only reveals what she wants you to see/She hides like a child but she’s always a woman to me.”

Elizabeth’s commercial instincts were finely-honed, she was alert to the opportunities to capitalize on her husband’s creative work, she was entitled to 50% of Joel’s assets, as well as her manager’s salary, and when Billy presented her with a birthday gift of the song Just the Way You Are, a heartfelt ode to his true love “I would not leave you in times of trouble/We never could have come this far, mmm/I took the good times, I’ll take the bad times/I’ll take you just the way you are,” her response was “Do I get the publishing, too?” In 1982 Joel’s career had taken off, but the marriage was failing, divorce was looming even though Joel still had feelings for Weber, but Elizabeth would do two things that would destroy their relationship.

She tried to take advantage of Billy when he was recovering in hospital after a serious motorcycle accident, by presenting him with a contract to sign, handing over his entire estate to her, which he rejected. She also brought her brother Frank in to assist with the management of Joel’s affairs, which resulted in some $30m being fraudulently siphoned out of Joel’s accounts, which were never recovered, after Frank filed for bankruptcy in 1990. Billy Joel had the last word in his official biography about Elizabeth and her brother Frank “I hooked up with Borgias! What a family to pick.” 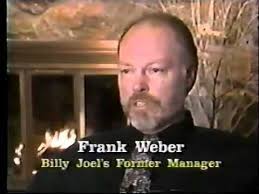 After Joel’s divorce from Weber her took himself off to the idyllic island of St. Barts’s in the Caribbean for some R&R where he met the supermodels Elle McPherson and Christie Brinkley at a piano bar there. Upon returning to New York he began writing a song inspired by the 19-year-old Aussie glamazon who had moved into Billy’s Central Park penthouse apartment, but by then Joel had become insecure about dating a much younger girl, the age difference was 14 years and as Billy was 1.67m tall, and Elle was a statuesque 1.82m, he felt they would soon part, and wrote the song And So It Goes for McPherson “ So I would choose to be with you/That’s if the choice were mine to make/But you can make decisions too/And you can have this heart to break/ And so it goes/And so will you soon I suppose” After Billy saw a photo of the two walking down the beach at Coney Island he noted “…Elle was so tall that I looked like Bubbles the Chimp next to her, and I realized that this was just not going to work.”   Below L-R – Christe and Billy, Elle McPherson. 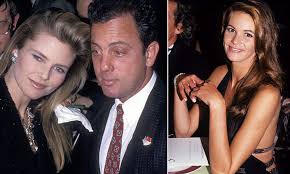 But Billy was still squiring Christie Brinkley and Whitney Houston around town and so he named the song he was writing Uptown Girls in their collective honour. Billy and Elle parted and Christie moved in with Billy, and when the song was released in 1983, two years before the two would tie the knot, he diplomatically dedicated the song to just one Uptown Girl, but both Elle and Christie inspired the lyrics. Below the swimsuit shot from Sports Illustrated of Elle that appears in the Uptown Girl video. 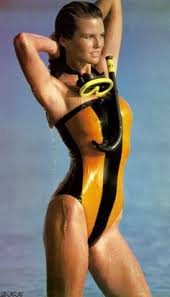 The song is about an average “downtown” man, a.k.a. Joel, who falls for beautiful and sophisticated “uptown” women, Christie appears in the promo video sashaying with grease monkey Billy, and on a billboard sign above the garage, while Elle appears in a pinup photo inside Billy’s locker in the garage, in the opening scene.

Joel has also commented that the melody, and harmony arrangement was inspired by the falsetto hits of Frankie Valli and the Four Seasons, the legendary Jersey Boys, hit makers of the 60’s and 70’s. Joel and Brinkley married in 1985 and divorced in 1994, but not before the supermodel and Billy had a daughter Alexa Ray, and Christie  inspired several other songs by Billy, and particularly his album An Innocent Man which sold over 9 million copies, and  bristled with hits – The Longest Time (50’s doo wop), Tell Her About It (Motown), Uptown Girl ( The 4 Seasons), and An Innocent Man ( Ben E King and the Drifters), which were all dedicated to Brinkley. In 1986 the synth pop track This Is the Time was one of Billy’s more mawkish tributes to Christie and a reminisce about the best times they spent together, which featured on his album The Bridge “This is the time to remember/’Cause it will not last forever/ These are the days to hold on to/ ‘Cause we won’t although we’ll want to.” 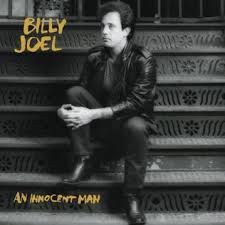 The lyrics proved to be prophetic, constant touring and suspected infidelity by Billy led to the breakdown of their marriage and Billy descended into a prolonged period of alcoholism. Billy would date many women over the next five years including Dina Meyer, Trish Bergen, Carolyn Beegan, and others, pausing briefly to marry Katie Lee in 2004 and then divorce her in 2009, she was 23, just four years older than Billy’s daughter Alexa Ray, and Billy was 55. Below L-R Billy, Christie and Alexa Ray 1988, Alexa Ray with her parents (2) 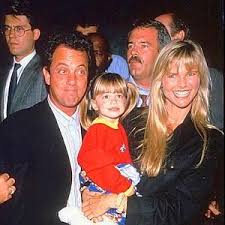 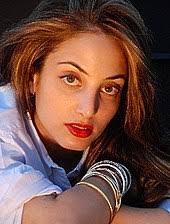 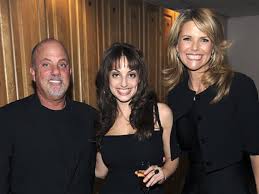 Alexa Ray was experiencing severe depression at this time, she had body-shaming issues and resorted to plastic surgery, both her parents had unstable marriages as Billy parted from Katie Lee and Christie divorced Peter Cook, her father was marrying women barely older enough to be her sister, and this further exacerbated her mental condition, and she attempted suicide in 2009. Below- Billy and Katie Lee marry in 2004. 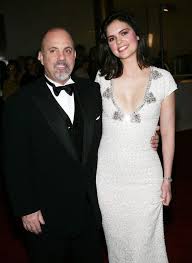 Billy was still drinking heavily, and although still touring, his creative output had dried up – something Billy was still personally struggling to do – his last album of new songs had been released back in 1993. In 2015 Joel would get back on the nuptial carousel, this time with hedge fund manager Alexis Roderick, and despite the age difference, she is 33 years younger than the Piano Man, they had a baby daughter in 2015 and another in 2017, and seemed to have settled into a comfortable rhythm of domesticity in recent years. Below Alexis, Billy and Della Rose (3) and Remy Anne (1.5) in 2019. 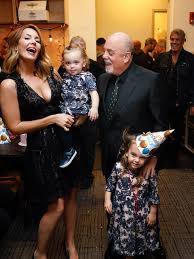