Kylie Minogue had struggled through the mid-nineties as she sought to re-invent herself as a more mature, sophisticated, and sleekly sexy performer outside the formulaic confines of the Stock, Aitken, Waterman hit factory. 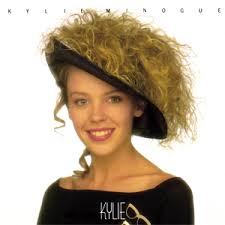 After all, she had very convincingly played the innocent wide-eyed ingenue on so many of their hit songs, but now she was looking for a new direction, a record that would re-define her public persona and raise her to the status of iconic pop queen. She was about to make that record. Below Songwriters Cathy Dennis and Rob Davis.

Norwich (UK)-born singer Cathy Dennis had started out as a member of dance-act D Mob who had several minor hits before Dennis went solo and scored with her first release, a cover of Fonda Rae’s Touch Me (All Night Long) (UK #5 and US #2), and she enjoyed considerable success with another dozen self-penned hits in the UK.

She moved into songwriting full-time in 1998 and immediately wrote Two in A Million (#2 UK) a hit for S Club 7. Her co-composer of Can’t Get You Out of My Head was former Mud guitarist Rob Davis who had written Groovejet for Sophie-Ellis Bextor in 2000 (UK #1). 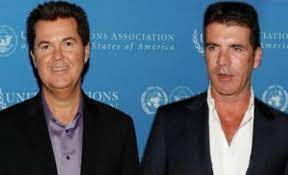 Both Davis and Dennis were managed by Simon Fuller (above left with Simon Cowell), who suggested that they work together to produce songs for several groups which Fuller managed at the time – S Club 7 and the Spice Girls. Dennis voiced the original demo of Can’t Get You Out of My Head, but remained unconvinced of its hit potential, so did Simon Fuller, who rejected it as a possible release for S Club 7, or the Spice Girls. 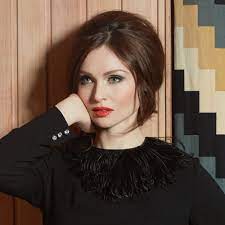 Famously both Sophie Ellis-Bextor (above) and Jimmy Somerville (ex-Communards) also turned it down, it had no verses just a chorus, the bridge was forgettable, and it was about destructive, obsessive love.  Dennis took the demo to Parlophone and played it to Minogue, 20 seconds in, Kylie asked when she could record it. Minogue is on record as having said of that moment “I knew this song and I were meant to be together … It was a moment in my career when everything seemed to be strong, directional, harmonious and it all revolved round this one epic tune. To this day I am thankful.”

The song is certainly about obsessive love, and yet Minogue’s vocals are restrained, even demure, and these conflicting signals raise the unresolved sexual tension of the song “I can’t get you out of my head / La la la/La la la la la”, is the chorus and it’s the first lyrics you hear, the pulsing bass line is insistent, the undulating keyboards propel the simple melody, Kylie’s vocals are breezy almost coquettish and the infectious hooks never stop. Ellis-Bextor did subsequently deny rejecting this song when offered to her and sportingly observed “Kylie totally owned the song, you simply can’t take the Kylie out of it”.

The promo video, directed by Dawn Shadforth and choreographed by Michael Rooney, was a masterclass of styling, with Minogue dancing in a revealing hooded jumpsuit which is virginally white, which further reinforced the duality of the song’s intent – Kylie is both lustful and restrained, teasing and unavailable, playful, and controlled, she may be infatuated with the unidentified object of her affection, but physical engagement will be on her terms.

A danceable, timeless, perfectly constructed pop classic, which was influenced by ELO’s Can’t Get It Out of My Head (1974), musically it ticked all the boxes, the keyboards and electric guitar of Rob Davis merged seamlessly, in a song where the debauched disco of Donna Summer’s Love to Love You Baby, met the robotic, metronomic, Teutonic precision of Kraftwerk. 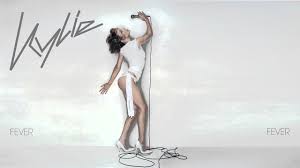 It was #1 in 40 countries, provided a second top ten hit in the USA for Minogue, won numerous industry awards, sold six million copies worldwide, clocked up 148 million Spotify streams, 200 million YouTube views, and pushed her album Fever to platinum status and international sales of seven million copies. In a year when there were no less than thirty-one #1 hits in the UK, as one hit wonders hit the market from reality song contest shows, Kylie’s addictive dance hit, positively dominated, holding down the top spot for four weeks.

Minogue would now be known by her first name only, Kylie had become an iconic pop queen, like Madonna, Janet, Tina, Britney, Diana, and Cher.